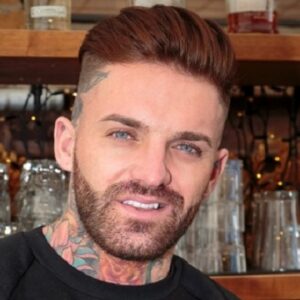 Aaron Chalmers is an English reality television star who is most known for his role on MTV’s ‘Geordie Shore.’ He appeared in the eighth season of the reality show, which is a spinoff of the popular American show Jersey Shore. Aaron has amassed a sizable following on popular social media sites such as Twitter and Instagram after appearing in two of the most popular reality television shows on UK television. His Instagram feed has over 2 million followers who drool over his hot bod and try to figure out how he got his net worth of over 800,000 GBP. This show’s colorfully tattooed cast member is a natural charmer who got along with everyone in the house. The female members of the cast are captivated to his strong and rebellious demeanor, which has a captivating impact on them. During his time on the reality show, he had open affairs with a number of women. He is one of the show’s most popular characters, with the majority of his fans being female.

Aaron Chambers had a variety of wild occupations before being cast on Geordie Shore, including bartending in a topless bar and working on an offshore oil rig! With a resume like Aaron’s, it’s no surprise he’d be a great fit for a raunchy show like Geordie Shore.

He first appeared in the eighth season of the show in 2014, alongside fellow housemate Kyle. Outside of the show, he is pals with primary Geordie Shore housemate Gaz and previously had a relationship with Holly Hagan (he had a brief appearance as Holly’s date in season 2). His arrival caused quite a stir in the home, as he repeatedly clashed with veteran Scotty T. Scotty is his main rival as the house ladies’ man, and he hit it off right away with Marnie Simpson, who is only one season old. Aaron quickly moved on to other interests when the relationship ended.
He also appeared in the sixth season of ‘Ex on the Beach,’ as the ex-boyfriend of three stunning women: Maisie Gillespie, Zaralena Jackson, and Nicola Bass.

In terms of family and schooling, little is known about Aaron’s past. He had worked at a topless bar and an offshore oil rig after school. He is a body art fanatic who has spent over 12,000 GBP on an intricate tattoo that covers his torso and hands. It’s bright and sultry as heck. If you’re still not sure why girls are swooning over this guy, consider this: “Girls love the badass boys!” Add in his tattoo and his affinity for dangerous sports like Mixed Martial Arts, and you’ve got yourself a winner.

The unending list of ladies with whom this blue-eyed boy has hooked up is in hand. His connection with Maisie Gillespie, who he dated from 2012 until 2015, is well-known. They had a misunderstanding and were unable to mend their relationship.

His repeated on-screen couplings with Geordie Shore co-star Marnie Simpson are next on the list. Despite the fact that their romance did not endure, the two costars have remained close friends, with Aaron standing up for Marnie during her public and brutal separation with ‘The Only Way Is Essex’ star Lewis Bloor.

For a long time, his relationship with DJ and model Lauren Pope made headlines in the British press. Marnie, Aaron’s ex-girlfriend, put doubt on the relationship by dubbing it a ‘Showmance,’ but Aaron and Lauren proved her wrong. However, the relationship did not last, and the pair reportedly divorced after a particularly trying holiday season together.

Aaron is currently said to be dating Danielle Scott, an English model from Essex.

Aaron Chalmers, a well-known reality star, has a net worth of $48 million, according to Wikipedia, Forbes, IMDb, and other online sites. He is 32 years old. As a professional Reality Star, he was able to make money. He is an Englishman.