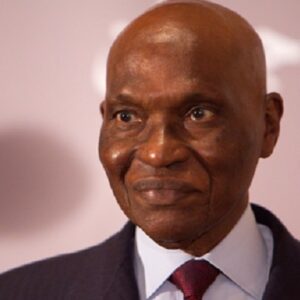 Abdoulaye Wade was the President of Senegal from 2000 until 2012. He is a Senegalese politician, lawyer, and academic. He became president after several years of campaigning for the position and finally being elected. He comfortably won re-election for a second term, but was forced to resign after losing his bid for a third term. He was gifted from an early age and received a scholarship to study in France. He returned to Senegal and began a career as a law professor, as well as becoming interested in politics. In 1974, he created the Senegalese Democratic Party (Parti Démocratique Sénégalais; PDS) to challenge the ruling Socialist Party (Parti Socialiste; PS). Beginning in 1978, he ran for president four times unsuccessfully before ultimately winning in 2000. His first tenure as president was a success, and he was praised for bringing about much-needed reforms in the country. Despite winning re-election with ease, his second term was not as successful as his first, and he lost his campaign for a third term. Even though he was defeated, he was praised for his devotion to democracy, as he stepped down peacefully, unlike a few other African leaders who used violence to maintain control.

Abdoulaye Wade was born on May 29, 1926, in Kébémer, Senegal, according to government documents. There is some confusion over his birth year, and it is widely assumed that he was born a few years earlier. In the 1920s, birth records in Senegal were unreliable. The country was ruled by the French at the time.

He attended high school in Senegal, where he excelled academically. A scholarship to study in France was granted to him.

He went to the Condorcet lycée in France to study law. He also taught law for a while after graduating.
In 1970, he received his Ph.D. in law and economics from the Sorbonne (now part of the Paris I–XIII Universities).

Abdoulaye Wade spent a few years practicing law in France before returning to Senegal. He was offered a position as a professor at the University of Dakar in Senegal upon his return. He rose through the ranks to become the dean of law and economics.

Wade had developed a strong interest in politics by this time, and in 1974 he spoke at a conference of the Organization of African Unity in Mogadishu, telling President Léopold Sédar Senghor that he intended to form a new political party.

Wade created the Senegalese Democratic Party (Parti Démocratique Sénégalais; PDS) on July 31, 1974, as an opposition to Senghor’s Socialist Party (Parti Socialiste; PS). While the PDS was founded as a Labour party, it switched to liberalism in 1976 to conform with new legislation.

The establishment of the PDS signaled the start of a new opposition movement in Senegal. In 1978, Abdoulaye Wade was elected to the National Assembly. In the same year, he ran for president for the first time, defeating incumbent Senghor. Wade was unsuccessful in his attempt, but his defeat only fueled his desire to run for president.

Senghor stepped aside as president in 1981, and Abdou Diouf took his place. Wade ran for president again in 1983, but this time he was defeated. In 1988 and 1993, he attempted two more times but failed.

Meanwhile, Wade maintained tight ties with Abdou Diouf and served as a Minister of State without Portfolio in the early 1990s for a year and a half. However, he quit due to a disagreement with PS.

In 1995, Abdoulaye Wade returned to the cabinet as a Minister of State, however he only kept the job until 1998. Despite being elected to the National Assembly in the February 1998 parliamentary election, he announced his retirement in late July 1998, claiming that there were sufficient deputies to fill his post.

Wade returned to Senegal in October 1999 after spending a year in France. Despite his several failures, he decided to run for president again in 2000. While he did not win the first round of the elections, neither did the opposition party.

As a result, a second round of voting was held, with Wade emerging victorious. As a result, on April 1, 2000, Abdoulaye Wade assumed the presidency of Senegal.

During his presidency, he pushed for a new constitution that decreased the president’s term from seven to five years. The change took effect in 2007. Wade re-election to the presidency in 2007 was a resounding success, and he was re-elected for a second term.

Wade’s second term, however, was not as successful as his first, due to a lack of progress in dealing with infrastructure issues like as power shortages and rising costs of living. In addition, the constitutional revisions he proposed drew a lot of criticism.

Wade’s decision to erect a massive statue for Senegal’s 50th independence anniversary celebrations in April 2010 garnered much criticism. Everything was condemned, from the statue’s semi-nude figures to its enormous manufacturing cost to his claim to one-third of the cash earned by the statue.

Abdoulaye Wade ran for President in 2012 for the second time. This time, however, he was soundly defeated by opposition candidate Macky Sall. Wade resigned from his job on April 2, 2012, after admitting defeat.

Wade calmly resigned from his office, unlike several other African leaders who utilized the army to preserve their grip on power even after political defeat. He has been regarded as one of the few African presidents committed to democracy as a result of this gesture.

Abdoulaye Wade’s first tenure as president is widely seen as a success. He implemented a much-needed modernisation program to improve the quality of life for Senegalese citizens, as he pledged throughout his election campaigns.

Schools were erected around the country, better drinking water facilities were installed, and inhabitants had better access to medical facilities.

Wade also worked hard to reduce Senegal’s financial reliance on France and signed agreements with the governments of other nations such as China and Dubai in order to strengthen Senegal’s foreign connections. His foresight and statesmanship garnered him international acclaim.

In 2005, the National Democratic Institute presented him with the W. Averell Harriman democracy award.

Abdoulaye Wade met Vivian Vert while studying in France and married her in 1963. Karim Wade and Sindjely Wade are the couple’s two children.

Karim Wade, the former head of the Islamic Organization Conference’s national agency, has been the Minister of State for International Cooperation, Urban and Regional Planning, Air Transport, and Infrastructure since May 2009, while his daughter is a Special Assistant to the President who has taken part in numerous Paris-Dakar rallies.

Abdoulaye is one of the wealthiest politicians and one of the most popular. Abdoulaye Wade has a net worth of $7.5 million.