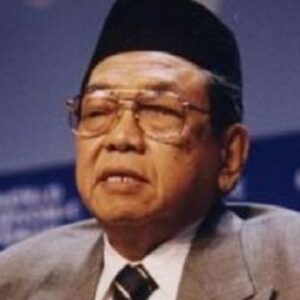 Abdurrahman Wahid was the 4th President of the Republic of Indonesia. He came from a well-known family and had modern and moderate ideas. With a religious education and a modern way of thinking, he became the Chairman of Nahdlatul Ulama (NU) and started the National Awakening Party (PKB). After Suharto stepped down as dictator, he was chosen as President by the Assembly. As head of a coalition cabinet, he had to deal with many political limits. During his 20-month term, he tried to make the army less important in political and social matters. Because of their bad track records, the Ministry of Information and the Ministry of Welfare were slowly taken apart. He reached out to ethnic Chinese people and took part in peace talks with separatists in East Timor and Aceh. He was a firm believer in pluralism. He gained respect around the world for his work to promote peace and understanding. Even though he was the leader of the Muslim country with the most people, he had a lot of respect for Israel and went there six times. The army and some powerful people in his cabinet didn’t like his chances, and this made the growing unrest worse over time. After he was kicked out of office, he continued to serve the country as a leader of the opposition.

Abdurrahman ad-Dakhil Wahid was born to Abdul Wahid Hasyim and Siti Solichah. He was known as Gus Dur. He was named after Abd ar-Rahman I of the Umayyad Caliphate and was called “ad-Dakhil,” which means “the conqueror.”

He was the oldest of five children and came from a very important family in East Java. His father was Indonesia’s first Minister of Religious Affairs and was a part of the nationalist movement.

He went to school in Jakarta at KRIS Primary School and Matraman Perwari Primary School. In 1957, he finished Junior High School in the Java region of Yogyakarta. He moved to Magelang so he could learn about Islam at Tegalrejo Pesantren.

In 1965, he went to school at the Higher Institute for Islamic and Arabic Studies, but he didn’t like the way the school taught, which was to repeat things over and over. He also started working at the Embassy of Indonesia.

Wahid was working at the Indonesian Embassy in Egypt when the 30 September Movement, a coup led by the Communist Party of Indonesia, happened. He had to write the reports about it.
He switched to the University of Baghdad and moved to Iraq, but he kept working with the Association of Indonesian Students and writing articles for Indonesian readers. In 1971, he went back to Indonesia.

He joined the Institute for Economic and Social Research, Education and Information (LP3ES), whose members were progressive Muslim intellectuals. He toured Java’s pesantren and madrasahs as an important contributor to the group’s magazine, Prisma.

In 1977, he became the Dean of the Faculty of Islamic Beliefs and Practices at Hasyim Asyari University, where he did a good job. He also gave speeches to the Muslim community in Jombang.

He became a member of the Religious Advisory Council of Nahdlatul Ulama (NU). Before the Legislative Elections of 1982, he campaigned for the United Development Party (PPP), which was made up of NU and three other Islamist parties.

In 1983, the NU agreed with President Suharto that all organizations should use Pancasila as their main philosophy. By getting out of politics, the NU decided to put its attention on social issues.

In 1984, he was elected Chairman of NU, and he worked to make changes to the pesantren education system so that it could compete with secular schools. He became close to Suharto because he taught him the Pancasila.

He stayed on as NU’s Chairman for two more terms. He didn’t want to join the Reform Committee that Suharto suggested. Suharto resigned as President of Indonesia in 1998 because of growing unhappiness and student protests.

He helped start a new political party called PKB, and in 1998, he became the head of its Advisory Council. He was also chosen to be their candidate for president in the next election.

In 1999, the People’s Consultative Assembly of the Republic of Indonesia (MPR) chose him over Megawati to be Indonesia’s fourth president. He talked Megawati, who was feeling down, into running for vice president, and she won.

As president, he won over the hearts of the Chinese minority by making the Chinese New Year a choice, letting people use Chinese characters more freely, and making Kongfucu an official religion.

In 2000, he was involved in two scandals: the Buloggate, in which $ 4 million went missing from the inventory of the state logistics agency Bulog, and the Bruneigate, in which he stole $ 2 million that the Sultan of Brunei had given him.

During his time as president, he traveled to the ASEAN countries, Israel, Japan, Kuwait, Jordan, China, Saudi Arabia, India, South Korea, Thailand, Brunei, Pakistan, Egypt, the United States, and many European countries.
His efforts to make the military less powerful in politics hurt his relationship with the country’s military, the TNI. He was also upset that they were giving weapons to Laskar Jihad in Maluku.

As terrorist attacks happened in Indonesia and the cabinet members became more and more uncertain, it seemed like the country was heading toward chaos. The MPR tried to get rid of him, and in 2002 Megawati became President.

In 2005, he put together a political group called United Awakened Archipelago and spoke out against the Yudhoyono Government. He was also involved in the work of The Wahid Institute, a non-profit group that he had started.

In response to movements for independence, he gave East Timor autonomy instead of independence. In 1999, he met with Abdullah Syafii, the leader of the Free Aceh Movement, to talk about making peace.

Wahid married Sinta Nuriyah and fathered four daughters: Alissa Qotrunnada Munawaroh, Zannuba Arifah Chafsoh (Yenny Wahid), Annita Hayatunnufus, and Inayah Wulandari.
He died from complications caused by his diabetes and was buried in Jombang, where he was born.

Abdurrahman Wahid is estimated to have a net worth of $4 million, and he makes most of his money as a journalist and politician. We don’t know enough about Abdurrahman Wahid’s background or his lifestyle.

He said, “The most important thing about Islam is that there are two kinds of it, and we need to know the difference between them. The first is Islam’s institutions, and the second is Islam’s culture.