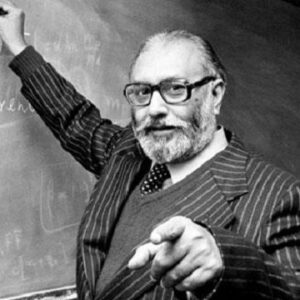 Abdus Salam is one guy who made Pakistan famous for reasons other than cricket and politics. This theoretical physicist made significant contributions to electroweak unification and was recognized with a ‘Nobel Prize’ for his efforts. Apart from devoting his efforts to particle physics, Salam actively promoted scientific development in his country. He was instrumental in the development of nuclear energy and Pakistan’s atomic weapon effort. Numerous Pakistani scientists who had the opportunity to work with him referred to him as a ‘Scientific Father.’ Salam worked tirelessly for the advancement of science in Pakistan until his death. Following Salam’s death, the Pakistani government released a stamp in recognition of his scientific contributions. He is widely regarded as one of the most prominent scientists that the country has ever produced. Salam was discriminated against by his own country despite his contributions to the country. He was seen as non-Islamic due to his affiliation with the ‘Ahmaddiya’ community. This prompted Salam to flee his nation and spend his final days in England.

Abdus Salam was born on 29 January 1926 to Chaudhry Muhammad Hussain and Hazira Hussain. Salam’s father worked for the Punjab state department of education as an education officer. His granddad was both a physician and a scholar of religion.

Salam graduated from Punjab University at the age of 14 with the highest grades ever recorded in the university’s history. Salam’s instructors urged him to pursue a career in English teaching, but he preferred mathematics. By 1944, he had also earned a B.A. in mathematics.

Salam attempted to enter the Civil Services in accordance with his father’s wishes. He was, however, disqualified due to the fact that he wore spectacles and was too young.
He earned his M.A. in mathematics from Government College University in 1946. The same year, he was also awarded a scholarship by the University of Cambridge to pursue additional studies.

Salam graduated from Cambridge University in 1949 with a BA degree in double first-class honors. Mathematics and physics were the subjects in which he chose to specialize.
Salam earned a Ph.D. in theoretical physics from Cambridge’s Cavendish Laboratory, where he focused on Quantum Electrodynamics for his dissertation thesis.

Salam began teaching mathematics at Government College University in 1951. He held this position until 1954. He was also the Chairman of Mathematics at the University of Punjab during this time period. Salam’s attempts to incorporate Quantum Mechanics into the undergraduate curriculum were unsuccessful, prompting him to teach the subject informally to those interested.

In 1954, he joined St. John’s College Lahore as a lecturer, where he remained for three years.
Salam began his academic career at Imperial College, London, in 1957. During his tenure, he established the department of theoretical physics. This department grew to become one of the most prestigious research institutions in the country.

Salam became the youngest man to be named a ‘Fellow of the Royal Society’ in 1959, at the age of 33.
Abdus Salam joined the Pakistani government in 1960 as a scientific advisor. Salam brought about a sea change in an era when prior governments spent less than 1% of Pakistan’s GDP on scientific research.

Salam proposed to Pakistan’s then-president Ayub Khan in 1961 the establishment of a space research agency. Later that year, an executive order formed the Space and Upper Atmosphere Research Commission.
Salam established the International Center for Theoretical Physics (ICTP) in Trieste, Italy, in 1964. Salam directed this research facility for nearly three decades, until 1993.

1965 proved to be a watershed year for Abdus Salam. This year, he founded the Pakistan Institute of Nuclear Research and Technology. Additionally, Pakistan’s first nuclear reactor, known as the Pakistan Atomic Research Reactor, began operations this year.

Salam created Pakistan’s International Nathiagali Science College (INSC) in 1975. The objective was to advance science in the country. This institute hosts annual gatherings of scientists from throughout the world, with the majority of the discussions, centered on physics.

Salam launched the International Center for Theoretical Physics (ICTP) in 1964, and it has grown to become one of the world’s premier centers for scientific research.
One of Salam’s several accomplishments that will be highly appreciated is the founding of the Pakistan Institute of Research and Technology in 1965. In the same year, he laid the groundwork for the nation’s first atomic research reactor.

Salam was instrumental in Pakistan’s effort to produce an atomic bomb. Salam visited the United States in 1971 at the suggestion of then-Prime Minister Zulfiqar Ali Bhutto. During his stay in the United States, he gathered considerable knowledge concerning the creation of an atomic weapon. Numerous significant scientific meetings were held as a result of this partnership between Bhutto and Abdus Salam. Among these significant gatherings was the infamous ‘Multan Meeting.’

Salam oversaw the completion of the theoretical design of the nuclear bomb device in 1977. This milestone was accomplished with the assistance of other scientists who were members of the ‘Theoretical Physics Group,’ another organization founded as a result of Salam’s vision.

The Pakistani government honored him with the ‘Sitara-E-Pakistan’ for clearing the road for scientific studies in the country.

Abdus Salam received the Royal Society of London’s ‘Hughes Medal’ in 1964 for his exceptional contributions to Quantum Mechanics and the Theory of Fundamental Particles.

In 1968, he received the ‘Atoms Peace Award’ for his contributions to nuclear science.
He was awarded the prestigious Nobel Prize in Physics in 1979 for his work on electroweak unification. He was the first Muslim to be awarded the Nobel Prize for science. He is also Pakistan’s first and only Nobel laureate.

Salam was twice married. At the time of his death, he was married to Dame Louise Johnson, who was also an Oxford University professor of molecular biology. From his first marriage, he is survived by three daughters and a son. Additionally, he fathered a son and a daughter from his connection with Dame Louise Johnson.

Salam fled Pakistan in 1974 in protest because the ‘Ahmaddiya’, a community to which he belonged, was labeled ‘Non-Muslim’ as a result of a constitutional amendment imposed by the Pakistani authorities.

Abdus Salam died in 1996 as a result of Progressive Cerebral Palsy. 30,000 mourners had assembled to pay their final respects to the man. His remains were cremated at Rabwah, Pakistan, near the location of his parent’s graves.

Abdus is one of the wealthiest physicists and is placed on the list of the most popular physicists. Abdus Salam’s net worth is estimated to be $1.5 million, based on our analysis of Wikipedia, Forbes, and Business Insider.