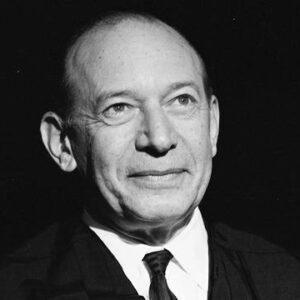 Abraham “Abe” Fortas was an associate justice of the United States Supreme Court who was the first nomination for Chief Justice since 1795 to be rejected by the Senate. He was a well-known civil libertarian who only served four years on the Supreme Court before resigning due to a series of allegations. Under the possibility of impeachment, he became the first Supreme Court justice to resign. When President Lyndon B. Johnson nominated him for the position of Supreme Court Chief Justice, his professional connection with Johnson was called into doubt, and he faced tough questions from the Senate. He was grilling by conservative senators during a Congressional hearing on his nomination, and his name was finally withdrawn. He also faced other claims that sparked debate and called into question his image as a Supreme Court associate justice. Despite the allegations, he is regarded as a highly educated individual with a thorough understanding of politics. He was also a co-founder of one of Washington’s most powerful law firms at the time, which is now one of the world’s largest law companies. He was a complicated and wise man, an excellent lawyer who also happened to be a brilliant and capable judge.

On June 19, 1910, he was born in Memphis, Tennessee, to cabinetmaker William Fortas and his wife, Ray Berson. He was the couple’s youngest of five children. His parents were Orthodox Jews from the United Kingdom.
He acquired his early schooling in Memphis public institutions and graduated from South Side High School in 1926.

He was named an assistant professor of law at Yale Law School after finishing law school. He also started working at the Securities and Exchange Commission (SEC) in Washington, D.C. as an adviser.

He joined the Public Works Administration as General Counsel in 1939 and then became the Under Secretary of the United States Department of the Interior in 1941.

After WWII ended in 1946, he co-founded and became a partner in the law firm Arnold & Fortas with Thurman Arnold, a former Yale professor. Simultaneously, he formed a lasting bond with Lyndon B. Johnson.

He defended Johnson in a challenge to his Democratic senate primary victory in Texas in 1948. There were severe suspicions of voter fraud against Johnson, but he assisted in demonstrating Johnson’s innocence and helping him become a Senator.

In the 1950s, he was hired as the defense counsel for American author Owen Lattimore.

Following the assassination of John F. Kennedy in 1963, Johnson was elected president. Fortas was a key figure in the establishment of the Warren Commission to examine President John F. Kennedy’s assassination. The following year, Johnson ran for president and appointed Fortas as a valued adviser.

In 1965, Johnson persuaded United States Ambassador to the United Nations Arthur J. Goldberg to resign so that Fortas could take his position. The Senate appointed Fortas to the Supreme Court as an associate justice on August 11, 1965.

Johnson nominated him for the position of Chief Justice of the Supreme Court in June 1968. However, the United States Senate grilled him extensively regarding his ties with President Lyndon B. Johnson. While serving on the Supreme Court as an associate justice, he was accused of routinely counseling Johnson on national political issues.

In addition, it was revealed that in the summer of 1968, he had received $15,000 from private entities representing corporate interests to conduct a series of university seminars.

His nomination was effectively filibustered by Senate Republicans, and Johnson eventually withdrew it. He remained on the Supreme Court as an associate justice until 1969, when he resigned due to the danger of impeachment.

Following his departure, he returned to his own practice and created another firm, Fortas and Koven, where he continued to practice law successfully. He was also a long-serving member of Carnegie Hall’s board of directors and a fellow on the Kennedy Center’s board of directors.

He was one of the justices that backed the historic Miranda v. Arizona decision in 1966, which made it essential for police to advise suspects of their rights when they were arrested.

During his term as an associate justice, he became a strong proponent of children’s and student’s rights. In the landmark Gault case in 1967, he found in favor of protecting juveniles’ right to fair process.

He married Carolyn Eugenia Agger, whom he met while studying at Yale, on July 9, 1935. She went on to become a prominent tax attorney. The couple didn’t have any children.

On Sundays, he was also an amateur musician who played the violin in the “N Street Strictly-no-refunds String Quartet.”

Abe is a Supreme Court Justice who is one of the wealthiest and most popular. Abe Fortas has a net worth of $1.5 million, according to Wikipedia, Forbes, and Business Insider.