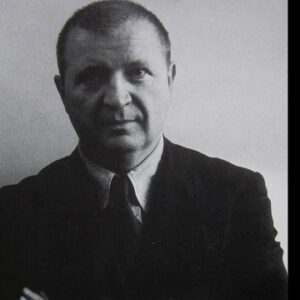 Ad Reinhardt was an American abstract painter who lived in the early twentieth century and is most known for his black works. Despite his academic excellence, painting was always his first interest, and he received numerous awards during his school years. Later, he earned a bachelor’s degree in art history from Columbia University and began his employment with the WPA Federal Art Project’s easel section. His early works were influenced by cubism and featured brilliantly colored geometric shapes with strong edges. He began using rectilinear patterns of little abstract parts in the late 1940s, resulting in a more tender appearance. Then, beginning in the 1950s, he began to focus on monochrome painting, gradually progressing to severely cruciform black painting. During this time, he also drew a number of political cartoons and caricatures for a variety of newspapers and periodicals under various pseudonyms. He was a far-left militant who took part in numerous protests. However, he was a firm believer in art being created and interpreted on its own terms, coining the expression ‘Art as Art’ rather than ‘artists as artists.’ Later in life, he wrote and lectured extensively on the subject of fine arts. Regrettably, he died at the age of fifty-three, before achieving his full potential. In 2013, his estate joined the David Zwirner Gallery in New York.

Adolph Dietrich Friedrich Reinhardt was born on December 24, 1913, in Buffalo, New York, to a working-class German-Russian immigrant family. His father was a competent garment worker who also worked as a labor activist. Edward was his brother’s name.

Initially, they lived in Riverside, near his extended family, along the Niagara River. He was extremely close to his cousin Otto when he was younger. His father’s job eventually moved them to New York City, where he began his education.

He became interested in art in elementary school and won numerous awards. He began functioning as the illustrator for the school magazine when he was in high school, and he also won several awards. He was a good student who excelled in academics in addition to his love in painting.

He won multiple scholarships to study arts in several colleges after graduating from high school. His father encouraged him to pursue it and pursue a career in commercial art, but he believed he had already mastered enough methods and that going to art school would be fruitless.

Instead, he decided to pursue a degree in art history. He joined at Teacher’s College, an independent institution under Columbia University, for his undergraduate studies in 1931 after winning a full scholarship from the university. He studied art history under Meyer Shapiro, a Lithuanian-born academic.
Soon after, he began contributing articles and graphics to The Columbian Jester, a student-run collegiate journal. ‘A smell of dash, gaiety, and Art-Deco-Stork-club style’ was evident throughout the Great Depression in most of these pieces.

Later on, he dabbled in political cartooning. He was born to socialist parents and grew up believing in socialism. It was reawakened when he became acquainted with left-wing student organizations and became involved in their activities. Class was a recurring theme in his art, which he reflected through sex, booze, and political attitude.
Ad Reinhardt earned his bachelor’s degree from Columbia University in 1936. Following that, he enrolled in the American Artists School to study with Carl Holty, a German-American abstract painter whose work was more hard-edged than other expressionists, and Francis Crisis, whose style was connected with the American Precisionists.
Simultaneously, he studied portraiture at the National Academy of Design with Karl Anderson, whose work includes portraits and genre settings. By the time he was in his mid-twenties, Reinhardt had absorbed a wide range of influences.

By the end of 1937, he had decided that what he wanted to make should be modern, abstract, and experimental. He began to eschew all forms of naturalism, particularly social realism, in his art from this point forward. He also gained confidence in his ability to succeed in his chosen field.

Ad Reinhardt was recognized as a painter by Burgoyne A. Diller in 1936, shortly after graduating from Columbia University. In the same year, he began working for the WPA Federal Art Project’s easel branch. He also worked as a freelance commercial artist at the same time.

He joined the American Abstract Artists in 1937, thanks to the encouragement of his tutor Carl Holty, and exhibited with them for the next ten years. Despite the fact that he quit AAA in 1947, he had always regarded it a significant milestone in his life.

He made acquaintances with many of the New York School’s future members at the WPA. Arshile Gorky, Willem de Kooning, and Stuart Davis were among them. Russell Right was another key associate during this time, for whom he made cartoons and displays for the 1939 New York World’s Fair.

Reinhardt’s time with the WPA came to an end in 1940. Following that, he went freelance and worked on a variety of projects, including creating posters for the War Bond drive and artwork for the Office of War Information, painting murals for the Café Society, and designing promotional materials for the Columbia Broadcasting System, among others.

At the same time, he continued to paint in his spare time. Until until, his art consisted of brilliantly colored geometric shapes with harsh edges. However, beginning in the early 1940s, he began to use rectilinear patterns of small abstract objects that were evenly scattered around the canvas. The overall effect got softer.

He joined the staff of Picture Magazine, a liberal publication based in New York City, in 1942. Thousands of cartoons and illustrations were made during this time. The ‘How to Look at Art’ series was the most well-known.
Peggy Guggenheim’s ‘The Art of This Century Gallery’ in Manhattan debuted on October 20, 1942, giving him his big break. Many young painters were asked to join in group exhibits, including Reinhardt.

He had his first solo exhibition in New York City’s Artists Gallery in 1943. Following that, he participated in a series of shows at Wakefield Bookshop and Mortimer Brandt Gallery, represented by Betty Persons.
Betty Person opened her gallery at 15 East 57th Street in Manhattan in 1944, cementing the connection. He began to participate in her exhibitions on a regular basis after being promoted by her.

When the United States entered the Second World War in 1945, Reinhardt’s artistic career came to a halt. He was drafted into the US Navy and served on a ship in Salerno Bay for a short time. He was released in 1946, just after the war finished.

Ad Reinhardt returned to PM in 1946 after being liberated from his wartime commitments. At the same time, he began post-graduate studies at the New York University Institute of Fine Arts and restarted his relationship with Betty Parsons.

He resigned from PM in 1947 and acquired a teaching position at Brooklyn College, which he held until his death. He also began organizing annual exhibitions at Betty Parson’s Gallery (1946-1965) and the Whitney Museum of American Art in Manhattan at the same time.

However, by the early 1950s, his style had changed much more. He began to focus on monochrome paintings, in which he symmetrically put squires and oblongs against a similar-colored background. He began by using red, but eventually moved to blue.

When he began to focus on black in 1954, he pushed his monochrome paintings to a new level. These works were known as ‘black paintings,’ and they mostly consisted of vast interlocking rectangles painted in various hues of black.
He also began writing at this phase of his career, commenting not only on his own work but also on that of his colleagues, often provoking controversy. Many of his articles were later compiled into a book called ‘Art as Art,’ which was released after his death in 1991.

Reinhardt taught at the California School of Fine Arts, the University of Wyoming, Yale University, and Hunter College in New York, in addition to his regular employment at Brooklyn College. In addition, he created caricature art for a number of New York-based newspapers, magazines, and publications.

Between 1954 and 1965, Ad Reinhardt is most recognized for his ‘black paintings.’ The canvasses appear to be painted just black at first inspection. However, a closer examination reveals that they are made up of black and nearly black colors.

In an unpublished essay, he said that these paintings were more like to monotonous Chinese paintings than to their western counterparts, which were made up of light and dark. They’ve been interpreted in a variety of ways, one of which is that the artist appears to be asking if there is such a thing as absolute through these paintings.

Ad Reinhardt married Rita Ziprkowski in 1953. Anna was the name of the couple’s daughter.
Reinhardt suffered a heart attack while working at the studio on August 30, 1967, and died the next day. He was only 53 years old at the time.

He is acknowledged today as a forerunner in postwar abstract art and a vital contributor to mid-century contemporary art.

Retrospectives of his characteristic abstract painting technique are currently on display in prestigious institutions all around the world. The Museum of Modern Art in New York (1991), the Guggenheim Museum in New York (2008), the Josef Albers Museum Quadrat in Bottrop, Germany (2010-11), and the David Zwirner Gallery in New York are just a few of them (2013).

Ad is one of the richest Painter & listed on most popular Painter. According to our analysis, Wikipedia, Forbes & Business Insider, Ad Reinhardt net worth is approximately $1.5 Million.