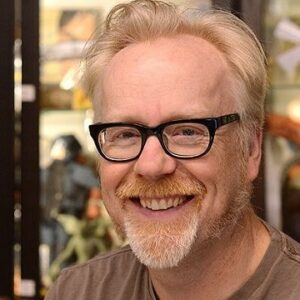 Adam Savage, a jack of all trades, began his career in his early childhood, working on his father’s show ‘Sesame Street.’ The child prodigy had numerous acting assignments and had also received formal acting training. However, inspired by the field of design, he abandoned his acting career after a few theatrical appearances. He then concentrated on graphic design and special effects for films. As an educator, he also teaches students how to build models. He has also served as an anchor for a number of television shows and events, including the ‘Amazing Meeting’ and ‘Make’ magazine’s annual event. Adam is best known as the host of the Discovery Channel’s ‘MythBusters’. For Adam, who is a technology freak, the show was the ideal fusion of technology and acting. The show allows him to investigate the truth behind various scenarios depicted in films and other media. He was awarded a doctorate by the ‘University of Twente’ for his efforts to popularize science and technology. He has also worked on special effects for films such as ‘Star Wars’ and ‘Matrix’. Additionally, the actor-anchor is interested in costume design and strives for uniqueness when creating a costume. Among his early costume designs is a suit of armour constructed entirely of aluminum strips that he collaborated on with his father. Continue reading to learn more about Adam Savage’s life and works.

Adam Savage was born in New York City on July 15, 1967, the son of Whitney Lee Savage, an animator-filmmaker, and a psychotherapist mother. Additionally, he has a sister named Kate. Both siblings followed in their father’s footsteps and pursued careers in the arts.

He graduated from ‘Sleepy Hollow High School’ in 1985. Adam has been interested in acting since he was a child, and even lent his voice to his father’s creation on the animated show ‘Sesame Street’. During this time period, he also appeared in a toilet paper commercial and a small role in the music video ‘You’re Only Human’.

He also enrolled in the prestigious ‘Tisch School of the Arts,’ where he spent five years learning the intricacies of acting. However, by the age of nineteen, he had abandoned acting in favor of graphic design.

Adam began his graphic design career in New York as an assistant animator. He then relocated to San Francisco, where he worked in theatre before transitioning to special effects for films.

Additionally, this designer has appeared in a number of films in minor roles. He played a helpful engineer in the 2001 film ‘Ever Since the World Ended’.

Adam worked as a faculty member at the ‘Academy of Art University’ in San Francisco, where he taught advanced model making to students. Around the same time, he was a member of the special effects team for the 2003 film ‘The Matrix Revolutions.’

He has been a regular on the Discovery channel show ‘MythBusters’ since its inception in 2003. The show debunks rumours, movie scenes, and news stories through the use of scientific methods.

He began his tenure as host of the ‘Amaz!ng Meeting’, an annual skeptics conference organized by magician James Randi, in 2006, a role he has reprised on a consistent basis since then. In the same year, he starred in the film ‘The Darwin Role’ as an owner of an armed supplies store.

He has appeared as a guest speaker on a variety of shows, including the annual ‘Maker Faire’ organized by ‘Make’ magazine in 2008 and the inaugural ‘Amaz!ng Meeting London’ held at Blackfriars the following year.

‘Night of the Little Dead’ is a short horror film directed by Frank Ippolito about how a conflict between local fishermen and tourists results in a diner being overrun by zombies and the aftermath. Adam appeared in this 2011 film as Dan.

Savage and special effects expert Jamie Hyneman, co-hosts of ‘MythBusters,’ appeared together on the 2012 science and engineering game show ‘Unchained Reaction’. These two gentlemen served as the show’s judges.

He continues to wear the educator’s hat, occasionally hosting lectures organized by the non-profit ‘City Arts & Lectures’ in San Francisco. He delivered a lecture at the 2014 ‘South by Southwest Interactive Festival.’

Adam is well-known for his modeling work in Hollywood films such as ‘Matrix’ and the ‘Star Wars’ franchisee, but his most well-known work is on the Discovery Channel’s ‘MythBusters’. It was the ideal marriage of acting and technology that drew him to the show.

In 2011, the ‘University of Twente’ awarded this animator an honorary doctorate.

Adam was involved in an affair prior to marrying Julia Ward in 2002. The couple looks after Adam’s twin children from a previous relationship.

Adam has a hearing impairment and is required to wear a hearing aid in his left ear.
Since his youth, this special effects designer has been a huge fan of superhero costumes such as those worn by Batman.

Adam Savage is an actor, host, and designer from the United States with an estimated net worth of $8 million. Adam Savage is probably best known for his work on the television show “Mythbusters,” but he has also worked extensively behind the scenes on some of Hollywood’s biggest blockbusters.

This costume designer appears as a juggler on the popular show ‘MythBusters’.