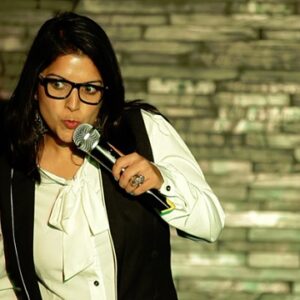 One of the first women to perform stand-up comedy in India was Aditi Mittal, an Indian stand-up comedian, and YouTuber. This funny woman, known for her outspoken, biting, and frequently self-deprecating humor, has the ability to communicate some serious points through her overtly funny comic performances. She never avoids “sensitive” subjects like sex, bras, or periods, and can make a hilarious joke about any subject under the sun, which contributes to her popularity. In fact, the character of “sex therapist, Dr. Mrs. Lutchuke,” who openly gives sex advice to both men and women with gay abandon, appears in some of her most well-known performances! She is undoubtedly very well-liked! She primarily performs stand-up comedy live, but she also frequently appears on TV shows. Along with American and South African comics, she was featured in the American documentary “Stand-Up Planet.” She is also a writer who has contributed columns and articles to Firstpost.com, DNA, and Grazia Men. Mittal is a well-known comedian who received an invitation from the BBC to attend the prestigious 100 Women conference in London in 2013. She has been highlighted as one of “India’s trailblazers” on BBC World and BBC America. She is a founding member of the Ghanta Awards and the Filmfail Awards, two of the biggest parody award shows in India, in addition to performing live and making appearances on television. Aditi Mittal is obviously very well-liked online as evidenced by her 130k YouTube subscribers, 13.6k Instagram followers, and 330k Twitter followers.

Aditi Mittal began a career as a journalist after earning her degree from Fairleigh Dickinson University in the UK. She accepted a position with an Indian media outlet in New York. She was, however, unsatisfied with her employment. So she made the decision to leave and focus on comedy, her actual passion. She eventually made it back to India and was among the first women to do stand-up comedy there. Even though she had some challenges at the beginning of her atypical profession, she eventually succeeded in carving out a space for herself. She quickly garnered a loyal audience thanks to her biting sense of humor and her bravery, which is uncommon for Indian women. She quickly rose to the top of the comedy world in India and attracted a sizable following abroad.

She plays often at the Comedy Store in Mumbai and the Canvas Laugh Factory these days, in addition to other international venues in the US and the UK. Along with stand-up comedy and live performances, she also makes appearances on television in programs like “Jay Hind,” a political satire program, and “Phenking News,” a CNN-IBN program with Cyrus Broacha. Aditi Mittal has been named one of India’s finest stand-up comedians by “The Times of India,” and CNNIBN.com has named her among the top 30 clever, smart, and wonderfully funny Indian women to follow on Twitter.

On November 12, 1987, in Pune, Maharashtra, Aditi Mittal was born. Her family background and early years are not well known. She was a student at Pune’s St. Mary’s and St. Joseph’s Schools. She relocated to the UK after completing high school and enrolled at Wroxton College, where she studied dramatic literature. She then applied to Fairleigh Dickinson University to study literature and communication. She spent some time working in the UK before returning to her native India, where she has since made a name for herself as one of the very few female stand-up comedians.

Aditi is one of the wealthiest and most well-known comedians. Our analysis of Aditi Mittal’s net worth from sources like Wikipedia, Forbes, and Business Insider indicates that it is roughly $1.5 million.