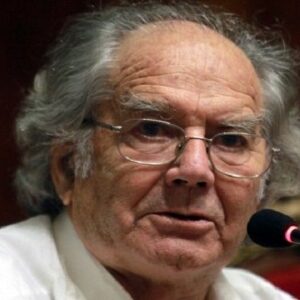 Adolfo Pérez Esquivel is an Argentine human rights campaigner and Nobel Peace Prize winner from 1980. He works as a painter, architect, and sculptor. In Latin America, he is a champion of human rights and peaceful changes, and his efforts to coordinate human rights initiatives across the continent have garnered him numerous prizes and plaudits. He had a tough life in Buenos Aires, the son of a Spanish fisherman who came to Argentina. He lost his mother when he was three years old and grew up in squalor. He heroically battled the trials of his boyhood to emerge as a good student and went on to study painting and sculpture at the Manuel Belgrano School of Fine Arts and the National University of La Plata. Over the course of his two-decade teaching career, he became a professor of architecture and taught at all levels from primary to university. In the 1960s, he became active with pacifist organizations and left his teaching job to devote his time to campaigning for peace. He has also served as president of the Honorary Council of Service, Latin American Peace, and Justice Foundation, and as a general coordinator for a network of Latin American-based communities promoting poor emancipation by nonviolent methods.

Adolfo Pérez Esquivel was born in Buenos Aires, Argentina, on November 26, 1931, to a Spanish fisherman who emigrated from Poio, Galicia. He grew raised in poverty when his mother died when he was three years old.

Despite his difficulties, he excelled in school and went on to the Manuel Belgrano School of Fine Arts and the National University of La Plata to further his study as a painter and sculptor.

Adolfo Pérez Esquivel had a good career as a sculptor and became well-known for it. Over the next 25 years, he had a successful teaching career, teaching at all levels from school to university and working with a range of sculptural mediums.

During the 1960s, he began working with Latin American Christian pacifist groups, and his commitment to the cause grew over time. In 1968, it was determined to form a unified organization that would encompass all nonviolent elements in Latin America.

In 1974, the group was given a more permanent shape, and Pérez Esquivel was appointed as the coordinator general of a network of Latin American communities dedicated to the nonviolent liberation of the poor. During that time, he was a professor at the Argentine National School of Fine Arts, but he departed to devote himself totally to the peace movement.

Following the 1976 military takeover, the country was thrown into chaos politically. It was wracked by a brutal dictatorship, and it was during this time that Adolfo Pérez Esquivel rose to prominence as a tireless champion of human rights and an outspoken opponent of all forms of violence.

He co-founded the NGO Servicio Paz y Justicia (“Service, Peace and Justice Foundation,” or SERPAJ) in 1974, which was essential in promoting an international campaign to expose the military regime’s abuses. The International Fellowship of Reconciliation is a member of SERPAJ (IFOR).

He made many enemies because he was outspoken and fearless. He was held by the Brazilian Military Police in 1975, imprisoned in Ecuador in 1976 with Latin American and North American bishops, and tortured by the Argentine Federal Police in Buenos Aires in 1977. Due to rising circumstances, he was finally released after 14 months.

On December 10, 1980, he received the Nobel Peace Prize for his efforts in the defense of human rights. In the years that followed, he maintained his position as an outspoken advocate for human rights, traveling and lecturing frequently.

He also served as president of the Honorary Council of Service, Latin American Peace and Justice Foundation, and the International League for Human Rights and Liberation of Peoples (located in Milan), as well as a member of the Permanent Peoples’ Tribunal throughout his years as a human rights activist.

He wrote a book called “Caminando Junto al Pueblo” (“Walking Together with the People”) in 1995, in which he documented his experiences with nonviolence in Latin America. In 1998, he was appointed to the University of Buenos Aires as a Professor of Peace and Human Rights Studies.

He is the creator of various murals and monuments as a sculptor and artist. The 15-station Latin American Via Crucis, built-in 1992 to mark the 500th anniversary of the conquest of America, is one of his most well-known architectural works.

Adolfo Pérez Esquivel is the co-founder of Servicio Paz y Justicia (“Service, Peace and Justice Foundation,” or SERPAJ), a Latin American Human Rights Non-Governmental Organization dedicated to the defense of political prisoners held by various South American dictatorships during the Dirty War in the 1970s and 1980s.

Pérez Esquivel was nominated for the Nobel Peace Prize by Mairead Corrigan and Betty Williams in 1976, and he received it on December 10, 1980, for his efforts in the defense of human rights. He gave the money from the prize to charity.
In 1999, he received the Pacem in Terris Award.

He married Amanda Pérez, a pianist and composer, in 1956. They have three sons together.

Adolfo Perez Esquivel has a net worth of $ USD 5 million and makes his living as a painter, architect, writer, sculptor, and university professor.