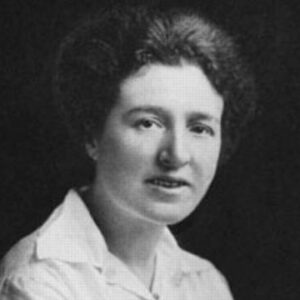 Agnes Arber was one of the most well-known botanists of the eighteenth century. Her father was an artist, and she learned the art of illustration from him, which she used to demonstrate the botanical work she was doing. When she was in school, she instilled an interest in botany, and her grades reflected her enthusiasm for the subject. She worked hard and learned a lot about the subject, and she even received a scholarship to assist her to continue her botany studies. Her meeting with famous botanist Ethel Sargent was fruitful, as Sargent provided her with the guidance she needed to improve Agnes’ abilities as a botanist. She worked in Sargent’s laboratory, which gave Arber a wealth of practical experience. She went on to become a renowned botanist who conducted groundbreaking research that paved the way for many subsequent advancements in plant science. She concentrated on plant anatomy and morphology, establishing a distinction between pure and applied morphology. Her work on floral structure has made a significant contribution to science. Her study work on monocotyledons has also made a significant contribution to botanical science.

She received her schooling at the ‘North London Collegiate School,’ where she developed an interest in botany. In 1894, her first research paper was published in the school magazine.
She then won a scholarship after winning first place in her class’s botany paper. She met plant morphologist, Ethel Sargent, during her school days, and she later became her botany guide.

She studied at London’s ‘University College’ in 1897 and graduated two years later with a B.Sc. She later enrolled at ‘Newnham College,’ where she got a Natural Sciences degree in 1902. She was a brilliant student who received numerous prizes and distinctions.

The Career of Agnes

She joined Ethel Sargent after finishing her studies at ‘Newnham College’ and worked at her Reigate laboratory for a year. Sargent taught her how to produce plant specimens using micro methods for microscopic analysis.

During the years 1902-03, she assisted Sargent with his seedling structure studies, and she also wrote her first work, ‘Notes on the anatomy of Macrozamia heteromers,’ which was published in the ‘Proceedings of the Cambridge Philosophical Society.’

She was then awarded a ‘Quain Studentship’ in Biology at London’s ‘University College.’ She was awarded a Doctorate of Science in 1905. During her time at this institute, she conducted research on the gymnosperm plant group. She published numerous articles on the morphology and anatomy of these plants.

In the year 1909, she moved to Cambridge and was accepted into the ‘Balfour Laboratory for Women’ at ‘Newnham College.’

Her first publication, ‘Herbals, their Origin, and Evolution,’ was published in 1912, and the same year, she was awarded a Research Fellowship by ‘Newnham College.’

Agnes worked on the morphology and anatomy of monocotyledon plants, and she published two volumes and a number of other papers based on her findings.

In 1920, she published her book ‘Water Plants: A Study of Aquatic Angiosperms,’ which is a relativity study of aquatic plants in which she evaluates the distinctions between diverse aquatic plants.

Agnes’ work, ‘The Monocotyledons,’ was published in 1925, after Ethel Sargent, Agnes’ mentor, had started it.
She worked in the ‘Balfour Facility for Women for a long time and continued to do so until the laboratory closed in 1927.

This was followed by the building of a laboratory in her home, where she continued to work until she decided to switch her focus from research to philosophical work.

Between 1930 and 1942, this famous botanist published ten papers, including investigations on flower structure.
She continued her botanical studies, concentrating on the ‘Gramineae’ family of plants. Her work ‘The Gramineae’ was released in 1934, and it included the vegetative and reproductive cycles of grasses, grains, and bamboo, as well as the embryology and life cycles of these plants.

This was her last book to be published. However, following the release of her last book, she wrote 10 research pieces that were included in the collection ‘The Annals of Botany.’

She authored study papers in 1937 that dealt with her previous years’ research, and they formed an important element of morphological studies.

Her last botanical paper was published in 1942, and after that, due to laboratory maintenance issues, she shifted her focus to philosophical and historical concerns.
Between 1942 and 1945, she wrote a number of historical publications about botanists such as John Ray, Nehemiah Grew, Marcello Malpighi, and Sir Joseph Banks.

Her publications ‘The Natural Philosophy of Plant Form,’ ‘The Mind and The Eye,’ and ‘The Manifold and the One’ were published between 1950 and 1957.

In 1950, she published ‘The Natural Philosophy of Plant Form,’ which became one of this exceptional plant morphologist’s most well-known books.

The shift from inquiry to the development of philosophy is the subject of this book. She introduces the ‘partial-shoot theory of the leaf’ in this book. According to the hypothesis, each plant component is either a shoot or a partial shoot.

She was named a ‘Fellow of the Royal Society’ in 1946, making her the first woman botanist to receive this honor.
The ‘Gold Medal’ was awarded to this learned researcher by the ‘Linnean Society of London.’

She married paleobotanist Edward Alexander Newall Arber in 1909, and the pair had a daughter named Muriel Agnes Arber.
The family relocated to Cambridge, where Agnes remained until her death on March 22, 1960.