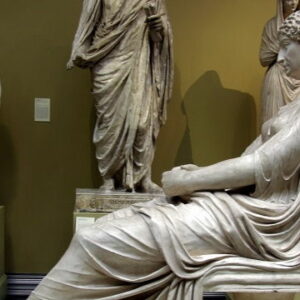 More Facts of Agrippina the Younger

Agrippina the Younger, sometimes known as Agrippina Minor, was the niece and fourth wife of Roman emperor Claudius, as well as the mother of Nero, the last emperor of the Julio-Claudian dynasty. Agrippina, one of the prominent queens of the Julio-Claudian dynasty, was renowned for her ambition, power, dominance, and cruelty. She was the daughter of Germanicus, a distinguished Roman general who became heir apparent to the empire during the reign of Tiberius. Her mother, Agrippina the Elder, was the great-granddaughter of Augustus, the founder of the Roman Empire. Agrippina the Younger suffered a few years of exile for scheming against Caligula, who succeeded Tiberius as Roman Emperor. Gnaeus Domitius Ahenobarbus, her first husband and the biological father of Nero, died of edema. Gaius Sallustius Passienus Crispus, her second husband, died of poisoning. Claudius, her uncle, and third husband, was considered by ancient historians to have also been poisoned, and numerous accounts accuse Agrippina. Nero, Claudius’ stepson through Agrippina, succeeded to the throne upon his death. Agrippina’s first attempts to play regent and govern the empire ultimately failed as Nero ascended to power, sparking a power struggle between mother and son. Agrippina was afterward executed by Nero.

Agrippina the Younger was born on November 6, 15, or 14 in Oppidum Ubiorum, a Roman outpost on the Rhine River that is now located in Cologne, Germany. She was the first daughter of Germanicus, an eminent Roman general, and Agrippina the Elder, a great-granddaughter of the first Roman Emperor Augustus.

Her three older brothers were Nero Caesar, Drusus Caesar, and Caligula, the latter of whom became emperor of Rome. She had two younger sisters whose names were Julia Drusilla and Julia Livilla.

Her father, who was thought to have been poisoned, fell ill and died at Antioch on 10 October 19 A.D., while her mother, Nero Caesar, and Drusus Caesar fell victim to the plotting of Praetorian Prefect Lucius Aelius Sejanus.

She was raised by three influential women: her mother, Agrippina the Elder, her paternal grandmother, Antonia Minor, and her great-grandmother, Livia Drusilla/Julia Augusta, Augustus’s wife. During this time, her great-uncle Tiberius succeeded Augustus as ruler of the Roman Empire.

Tiberius married Agrippina to Gnaeus Domitius Ahenobarbus, a close relative of the five Roman Emperors from the Julio-Claudian dynasty, in Rome in AD 28 when she was 13 years old. Gnaeus was her closest paternal cousin.

Gnaeus, who came from a prestigious family of consular rank and served as consul in 32 AD, was notorious for his disgusting and dishonest behavior, which Roman historian Suetonius described as “a man who was loathsome in every part of his existence.”

Gnaeus and Agrippina decided to settle between Rome and Antium (present-day Anzio and Nettuno). Early in the year 37 AD, Tiberius appointed Gnaeus as a commissioner, and on December 15, that same year, the only son of Gnaeus and Agrippina, Lucius Domitius Ahenobarbus, later Emperor Nero, was born in Antium.

According to Suetonius, when friends congratulated Gnaeus on the birth of his son, Gnaeus responded, “I don’t believe anything generated by me and Agrippina could be helpful for the state or the people.”

Upon the death of Tiberius on March 16, 37 AD, Caligula ascended to the throne of Rome and conferred several honors on his three sisters, Agrippina, Julia Drusilla, and Julia Livilla. These included the privileges of the Vestal Virgins and the minting of coins bearing his and his sisters’ pictures.

Following the death of Drusilla, a close friend of Caligula, on 10 June 38 A.D., Marcus Aemilius Lepidus, Agrippina, and Livilla attempted to assassinate Caligula in 39 A.D. in order to make Lepidus the next Emperor. The scheme became known as the “Three Daggers Scheme.”

Caligula beheaded Lepidus and deported Agrippina and Livilla to the Pontine Islands.
Gnaeus died of edema at Pyrgi in January of the year 41 AD. Although he bequeathed one-third of his land to his son Nero in his testament, Caligula confiscated the property and sent Nero to live with his paternal aunt Domitia Lepida, mother of Claudius’ third wife Valeria Messalina. Claudius later restored Nero’s patrimony after becoming Roman Emperor.

On January 24, 41 A.D., Caligula was murdered on the Palatine by his own Praetorian Guard as part of a plot comprising senators, officers of the Praetorian Guard, and courtiers. Just hours following his death, his wife, Milonia Caesonia, and daughter, Julia Drusilla, were also slain.

The Praetorians announced Claudius, Caligula’s uncle, as the future Roman Emperor on the day of the latter’s death. Claudius recalled Agrippina and Livilla from exile following his succession to the throne.

Gaius, who served as consul twice, was possibly murdered by Agrippina in the year 47 AD. Nero inherited his riches of two hundred million sesterces.

Marriage to Claudius, the Roman Empress

Empress Valeria Messalina, the second paternal cousin of Agrippina and the third wife of Claudius, was a powerful and influential lady noted for her brutality, predatory behavior, and promiscuity. She also sought to murder Nero because she perceived him as a threat to the position of her son, Britannicus.

In AD 48, following Messalina’s sham marriage to the Roman senator Gaius Silius and learning of their assassination plot, Claudius ordered their execution. In the meantime, Agrippina became the mistress of Marcus Antonius Pallas, a renowned Greek freedman, and secretary.

Claudius, contemplating his fourth marriage, selected Agrippina, his niece, from the three options proposed by his counselors, including Lollia Paulina, Caligula’s third wife. The marriage took place on the first day of the year 49 A.D., although it was generally opposed because marriage between an uncle and a niece in Roman society was considered incestuous and unethical.

This marriage elevated Agrippina to the position of Empress and made her the most powerful woman in the Roman Empire. She swiftly accused Paulina of magic and took her property without a hearing. Agrippina sent Paulina into exile in Italy, where she was forced to commit suicide.

In addition to Paulina, Agrippina had numerous others executed whom she perceived to be a threat to her and Nero’s position. The praetor Lucius Junius Silanus Torquatus, Britannicus’ instructor Sosibius, and Messalina’s mother Domitia Lepida the Younger were among Agrippina’s victims.

In the year 50 A.D., she was given the Roman imperial honorary title Augusta. Thus, she became the third Roman lady to obtain this title, following Livia Drusilla and Antonia Minor. In the same year, Claudius also created Colonia Claudia Ara Agrippinensis, the first and only Roman colony to bear the name of a Roman lady. North Rhine-Westphalia, the most populous state in Germany, is home to the largest city, which is today known as Köln.

Eventually, she was successful in persuading Claudius to appoint Nero as his successor, so denying Britannicus the throne. Claudius adopted Nero, then known as Lucius Domitius Ahenobarbus, in the year 50 AD. After this adoption, he was known as Nero Claudius Caesar Drusus Germanicus and became Claudius’s heir and acknowledged successor.

Claudius began to grieve his marriage to Agrippina and his adoption of Nero over time, and he began to consider and prepare Britannicus for the throne. This may have made Agrippina and Claudius’ final months of marriage more contentious and provided Agrippina with a reason to remove him.

On October 13, 54 CE, Agrippina allegedly poisoned Claudius to death by bringing him a plate of poisoned mushrooms.

On October 13, 54 AD, Nero succeeded Claudius as the new Roman Emperor. Agrippina was initially effective in managing her son and the empire during the first few months of Nero’s reign, but he eventually seized control, resulting in a power struggle with his mother.

In 55 A.D., Nero removed Agrippina’s supporter Marcus Antonius Pallas from the treasury and poisoned Britannicus when Agrippina attempted to enthrone him. Consequently, Nero expelled her from the palace and stripped her of her titles and rights.

Nero evicted her from the palace in the year 57, after which she resided in a riverbank estate near Misenum and made brief visits to Rome.

She was executed on March 23, 59 CE in Misenum at Nero’s command and cremated that evening on a dining couch. Many believe that Nero’s affair with Poppaea Sabina was the basis of strife between mother and son, despite the fact that the circumstances and causes of her death varied.