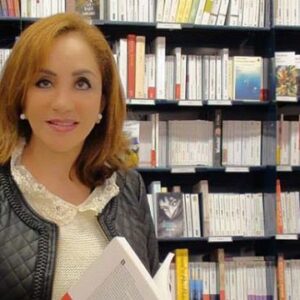 Ahlam Mosteghanemi is a poet and novelist from Algeria. She is also, without a doubt, the most successful Arabic author of her generation. She was born in exile in Algeria during a period of considerable instability. Her upbringing as the daughter of a French teacher who later became an Algerian independence warrior impacted her perspective and inspired her work. She values being able to write and express herself freely in Arabic as one of the first pupils in the new Arabic schools in independent Algeria. When her father was unable to provide for the family, she made the decision to look after them. Her father, on the other hand, was opposed to her working. He had battled hard for her to be able to study Arabic. She managed to do both in some way. She was first recognized for her powerful Arabic poetry, which had hitherto only been associated with Algerian men. Her audacity, conveyed in Arabic, sent shivers through the Algerian literary world. She was eventually obliged to pursue her graduate studies outside of the United States. Over the course of several years, she effortlessly transitioned from poetry to novels. Her first work, which she finally published, became an instant best-seller in the Arab world, as did her subsequent four novels. Her writings, which explore human sorrow and unmet hopes, have a broad appeal.

She was born in Tunis, Tunisia, on April 13, 1953, while her family was in exile. Mohamed El Cherif, her father, was wanted by the French government for his role in Algeria’s liberation war.

Algeria attained independence in 1962. The family relocated to Algiers, where her father served in the first independent Algerian administration and Ahlam attended the country’s first Arabic school. Her classmates and she were among the first Algerians to receive an education in Arabic rather than French.

To support her family, she worked as a daily poetry show host on national radio in 1970. Her father had been hospitalized after an attempted coup for a psychological breakdown, and she had vowed to assist in the care of her family. She was 17 years old at the time and studying for her examinations.

She earned a B.A. in Arabic literature from the University of Algiers in 1973 and released ‘On the Harbor of Time,’ the first collection of poems written by a woman in Arabic.

She was denied entry to the University of Algiers’ master’s program and expelled from the Union of Algerian Writers shortly after graduating. She had upset the status quo as a woman writing in Arabic by writing too openly and freely on issues such as women’s rights.

She moved to Paris in 1976 and released ‘The Writing in a Moment of Nudity,’ her second collection of poetry.
She received her Ph.D. in sociology from Sorbonne in Paris in 1982. Her thesis investigated the intricacies of men and women in Algerian society, as well as their frequent discomfort and miscommunication.

She moved to Lebanon in 1993 and released her first novel, ‘Memory in the Flesh,’ which was based on works she had gathered during her time in Paris. She became the first female Algerian novelist to publish in Arabic after its publication.

In 1997, she published ‘Chaos of the Senses,’ a highly acclaimed sequel to ‘Memory in the Flesh,’ which went on to win a major literary award.

The third novel in the trilogy, ‘Bed Hopper,’ was published in 2003. It’s been reproduced over a dozen times.
In front of a crowd of roughly 1500 people, the Governor of Beirut awarded her with the Beirut Shield in 2009. ‘The Art of Forgetting,’ her book, was also launched this year.

‘On the Harbor of Time,’ her book of poems, stunned Algeria’s newly independent nation. Not only was an Algerian woman producing poetry in Arabic, but she was also freely sharing her thoughts and beliefs on topics like women’s rights and romance.

For her first novel, ‘Memory in the Flesh,’ she received the literary Naguib Mahfouz Prize in 1998. As a result, it was translated into English in the year 2000.

She was awarded the Pioneers of Lebanon Committee Medal in 2004 for her entire body of work.
President Abdelaziz Bouteflika of Algeria awarded her a medal of honor in 2006. She was selected The Most Distinguished Arab Woman of 2006 by the Arab Women Studies Center in Paris/Dubai.

Arabian Business Magazine named her one of the 100 most influential people in the Arab world from 2006 to 2008. She was ranked 58th on the list in the final year.

She married Georges El Rassi, a Lebanese historian and journalist with a keen interest in Algerian history, in 1976. They have three sons together.

Her books have been translated into various languages and included in high school and university curricula all around the world.

Ahlam Mosteghanemi is one of the wealthiest and most well-known novelists. Ahlam Mosteghanemi’s net worth is estimated to be $1.5 million, according to Wikipedia, Forbes, and Business Insider.

“That is my daughter,” her father informed the critics at her debut poetry recital. She is free to write whatever she wants. “She is no longer bound.” Years later, she credits his words for her strength.
“When we lose a love, we write a poem; when we lose our homeland, we create a novel,” she remarked about why she turned from poetry to novels.