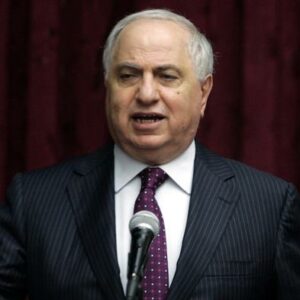 Between 2005 and 2006, Iraq’s deputy prime minister, Ahmed Chalabi, was an Iraqi politician. Between 2005 and 2006, he also served as Oil Minister for a short time. Chalabi was a divisive character who was better recognized for his controversies than for his accomplishments, and he was a scandal in US foreign policy. The American admirers dubbed him “Washington of Iraq.” He was also credited with being the single most influential figure in bending US policy toward Iraq. Richard Bonin’s book ‘Arrows of the Night’ details how Chalabi deceived practically everyone, including the American establishment, the CIA, and Iran’s intelligence head, to depose Saddam Hussein. Chalabi and the US came together to strive for a regime change by deposing Saddam Hussein from power because they shared a common interest. Chalabi was successful in convincing the US government to invade Iraq.

Ahmed Chalabi was born in Baghdad on October 30, 1944. He is from one of Baghdad’s wealthiest, most recognized, and elite Shia families. Chalabi and his family left Iraq in 1956 owing to the country’s deteriorating political circumstances. He spent the majority of his time in the United States and the United Kingdom.

Chalabi joined the Mathematics Department at the American University of Beirut shortly after receiving his PhD.
Chalabi launched Jordan’s Petra Bank in 1977. At the time, the Central Bank issued an order requiring all banks to deposit 35 percent of their reserves with the bank. Except for Petra Bank, all banks complied.

Petra Bank was accused of dishonest accounting after a comprehensive investigation, prompting Chalabi to escape the country before authorities could take action. A Jordanian military tribunal found him guilty of bank fraud in his absence. If he tried to enter Jordan again, he would face a sentence of 22 years in prison.

When Chalabi was named leader of the Iraqi National Congress, an umbrella position organization that received a lot of support and money from the US government as it worked to remove Saddam Hussein, the controversy around him had only begun to build.

When several of his supporters were slain while building a resistance movement among Kurds in Northern Iraq in the mid-1990s, Chalabi departed the country once more.

Chalabi played a key role in convincing the US government and media, particularly the ‘New York Times,’ that Sadam Hussein possessed weapons of mass devastation and had the capability to produce them. In 2003, the United States eventually invaded Iraq. He was accepted into the Iraq provisional governing council by the Coalition

Provisional Authority after the US invasion of Iraq. In September 2003, he was elected president of the council. He slammed a scheme that would allow the UN to appoint an interim Iraqi administration.

Between March 2000 and September 2003, the US State Department paid the Iraqi National Congress almost $33 million (INC). The Defense Intelligence Agency paid Chalabi’s Iraqi National Congress roughly $335,000 per month until May 28, 2004. Chalabi’s funding was terminated by the US government in 2004.
Chalabi established a new political position as a Champion of Iraqi Shi’ites after falling out with the US Department of State.

Chalabi and other INC members were charged with fraud involving the exchange of Iraqi currency, large-scale theft of both national and private assets, and a variety of other crimes.

He regained enough trust in 2005 to be named deputy Prime Minister and acting oil minister. On April 28, 2005, he was appointed deputy prime minister. Chalabi’s coalition did not win a single seat in Parliament in the December 2005 elections.

Chalabi married Leila Osseiran, the daughter of prominent Lebanese politician Adil Osseiran, in 1971. They have four children together.

When his motorcade was ambushed in the Tony Mansour neighborhood of Bhagdad in 2008, he had a tight escape. At least 5 members of Chalabi’s squad were assassinated.
Ahmed Chalabi died on November 3, 2015, at his house in Kadhimiya, Baghdad, probably of a heart attack.

Ahmed Chalabi has a net worth of $ USD 5 million and earns a living as a mathematician, businessperson, and politician.

Chalabi is also accused of deceiving a group of reporters from ABC News and British magazines by setting up interviews with ‘Saddam’s Mistress,’ Parisoula Lampsos, who spread numerous claims regarding a meeting between Hussein and Osama Bin Laden.