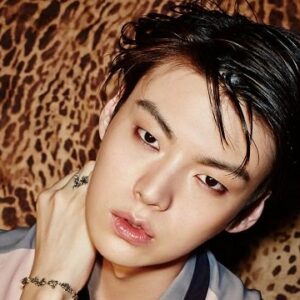 Ahn Jae-hyun is a South Korean model and actor who has been in a number of major films and television shows. He began his acting career in 2009 with commercials, rampwalks, and magazine photoshoots, eventually graduating to make his television debut in the show ‘High Society,’ and from there, he never looked back, landing role after role and establishing himself as one of the most popular actors of his generation. Ahn made his cinematic debut in 2014 with the film Fashion,’ and went on to star in two more films in the following two years, ‘Wedding Bible’ and ‘Perfect Imperfection.’ His television credits include ‘My Love from Another Star,’ ‘Blood,’ and, most recently, ‘Reunited Worlds.’ He has received numerous honors throughout his career in the entertainment industry, including Best Fashion Model at the 8th Asian Model Fashion Awards and the Global Star Best Actor award for his performance in the smash TV series ‘Cinderella and the Four Knights.’ Ahn married his longtime fiancée Ku Hyu-sun in May 2016, who also happens to be an actor and co-starred alongside Ahn in the TV series Blood.’

On July 1, 1987, Ahn Jae-Hyun was born in Seoul, South Korea’s capital. For the most part, Ahn was a quiet youngster, later admitting that his childhood was very tranquil and quiet in comparison to his brothers, who were usually causing a commotion in the house. As a child, he had distinct interests, preferring to cook at home rather than play outside with his buddies.

He went to a lot of cram schools as a kid who wasn’t very interested in academics. He became bored with his studies, and he began to fantasize about a future career that did not require him to spend hours searching through books.

Despite his lack of interest in studies, he excelled in school, demonstrating to the other students and teachers that a sharp mind is all that is required to succeed academically. Despite this, he found it difficult to envision a profession like that of ordinary people.

He began cooking classes in high school, a boyhood love, and then enrolled in a music institution while still in high school. He went from one activity to another because he didn’t have any definite ambitions for his future in mind.

Perhaps his third-year stint in fashion classes was something that piqued his curiosity. He wanted to try out as a fashion model because of his attractive physique and attractive face, but he had to finish his education first, and since he didn’t have much to say there, his parents got him enrolled in college to study business administration.

After that, Ahn began working in the sector, and it turned out that a modeling career was tailor-made for him, and he was soon signed up with the ESteem Modelling agency.

The Career of Ahn Jae

Around 2009, Ahn Jae-Hyun had a somewhat successful modeling career, appearing in a number of well-known magazines and commercials. He has walked the runway for a number of designers and garnered multiple modeling industry accolades, making him a popular commodity among young models.

Naturally, acting became his next great professional objective, and he began with a little role in the 2011 film ‘High Society,’ in which he portrayed a delivery man.

But that modest role did a lot for him; he was instantly noticed by many people, which led to his appearing in multiple music videos for musicians like K Will, Sistar19, and Baek A-Yeon. With his growing fame, he landed his first major part in the TV series ‘My Love from Another Star.’

In the drama, he played the younger brother of major actress Jun Ji-Hyun, and it was supposed to be the defining role of his career. His presence was adorable, and the show was already hugely successful, with nearly every home in South Korea watching it. Ahn’s work was well-received, and he began to receive additional acting offers.

Ahn’s career grew tremendously in 2014, as he was given stronger roles. In the same year, he participated in the comedy series ‘You’re all encircled’ and made his film debut with ‘Fashion King,’ which was a moderate box office success. Ahn also served as the MC for Mnet’s weekly music show ‘M! Countdown’ in the same year.

His career was taking off, and the next year he starred in the TV series ‘Blood,’ in which he also played his first leading role. In the series, Ahn played a vampire who also happened to be a doctor working in one of the country’s leading cancer hospitals.

He played a vampire who was lonely and wanted to be near to anyone, thus his part wasn’t wholly frigid. Ahn was nominated for two acting honors at the KBS Drama Awards that year for his sensible portrayal, which was simple and got multiple applauses.

In 2016, Ahn was cast in a new role, which increased his popularity among television viewers. In the romantic comedy ‘Cinderella and the Four Knights,’ he played the lead role.

Ahn portrayed a playboy who never really settles down with a girl, but who yet falls profoundly in love with the show’s lead actress. Ahn got the Top Excellence Award at the 9th Korea Drama Awards for this performance, among many others.

Ahn was in the prime of his career at the time, having appeared on the reality show ‘New Journey to the West,’ and his popularity had already crossed the South Korean border. He was approached by a Chinese producer to star in the film ‘Perfect Imperfection,’ and when the film premiered in China, Ahn earned a lot of affection from the Chinese people.

In 2017, Ahn joined the cast of SBS’s fantasy romance drama ‘Reunited Worlds,’ and in the same year, he participated in the music video for No Reply’s song ‘On the Way Home.’

They suggested that rather than spending the money on an extravagant wedding, it would be preferable to donate it. The funds were donated to Severance Hospital, which is the country’s largest and oldest hospital.

Ahn is a cat enthusiast who currently has a cat named Ahn Joo, whom he affectionately refers to as his “best buddy.”

From his active career in the entertainment sector, Blood actor Ahn Jae Hyun has accumulated a large net worth of $10 million as of 2020. Since he works as both an actor and a model, he must earn tens of thousands of dollars.