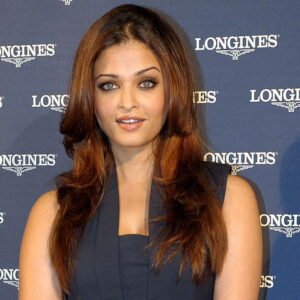 Aishwarya Rai Bachchan is an actress and model from India. After winning the ‘Miss World 1994’ pageant, she rose to international prominence. She went into the film industry as an actress after a few years of modeling. She rose to prominence in the Hindi cinema business as a result of her attractiveness and acting abilities. Aishwarya Rai Bachchan has been dubbed “the most beautiful lady in the world” by Indian and foreign media. She has received two “Filmfare Awards” and the “Padma Shri,” India’s fourth highest civilian honour. She had little acting experience prior to entering the film industry, but with the help of several seasoned directors, she rose to become one of Bollywood’s top actresses. In Mani Ratnam’s Tamil film ‘Iruvar,’ Rai made her film debut. After participating in the film ‘Hum Dil De Chuke Sanam,’ she attracted the attention of Bollywood directors. Although some of her performances have been critiqued, she has also had outstanding performances in films such as ‘Hum Dil De Chuke Sanam,’ ‘Devdas,’ ‘Jodha Akbar,’ ‘Chokher Bali,’ and ‘Raincoat.’ She was the first Indian actress to serve on the ‘Cannes Film Festival’ jury.

Aishwarya Rai was born on November 1, 1973, in Mangalore, Karnataka, India, to Krishnaraj and Vrinda Rai, into a Tulu-speaking household. On March 18, 2017, her father, an Army biologist, died. Aditya Rai, her older brother, works in the merchant navy.
Rai went to ‘Arya Vidya Mandir High School’ when the family moved to Mumbai. She subsequently spent a year at ‘Jai Hind College’ before enrolling at ‘DG Ruparel College’ in Matunga. In the intermediate tests, she received a perfect score of 90 percent.
She studied classical dance and music for five years during her adolescence. She wanted to be an architect at first, so she enrolled at the ‘Rachana Sansad Academy of Architecture.’ She did, however, abandon her education in order to pursue a modeling career.
After winning an international supermodel contest hosted by ‘Ford’ in 1991, she was featured in the American issue of ‘Vogue.’

Aishwarya Rai rose to prominence in the modeling world after starring alongside actor Aamir Khan in a Pepsi commercial in 1993. In 1994, she had a career breakthrough when she placed second in the ‘Miss India’ contest. She was subsequently crowned ‘Miss India World.’ She subsequently went on to represent India in the ‘Miss World’ pageant, where she won the title.
She made her acting debut in Mani Ratnam’s Tamil film “Iruvar” in 1997. In the film, she played both ‘Pushpavalli’ and ‘Kalpana.’ She made her Bollywood debut the same year with the film ‘Aur Pyaar Ho Gaya.’
She made her acting debut in the Tamil film ‘Jeans’ in 1998. She received plaudits for her acting and dancing skills in the picture, which was a commercial success. Sanjay Leela Bhansali’s 1999 love drama ‘Hum Dil De Chuke Sanam,’ in which she co-starred with Salman Khan and Ajay Devgn, was Rai’s first hit Hindi film. She was lauded for her attractiveness and acting abilities, and the picture helped launch her her career.
In 1999, she co-starred in Subhash Ghai’s film ‘Taal,’ opposite Akshaye Khanna and Anil Kapoor. Her acting and dance abilities were complimented. In the year 2000, she acted in the Tamil film ‘Kandukondain Kandukondain,’ for which she received praise for her strong performance.
She also starred alongside Shah Rukh Khan and Chandrachur Singh in the 2000 film ‘Josh.’ Although the picture received mixed reviews, it was an economic success. Following the failure of her film ‘Dhai Akshar Prem Ke,’ in which she starred alongside Abhishek Bachchan, she played in a supporting part in ‘Mohabbatein,’ in the same year.
Rai took the lead part in Sanjay Leela Bhansali’s 2002 love-saga ‘Devdas,’ opposite Shahrukh Khan, after acting in another failed film titled ‘Hum Kisise Kum Nahin.’ The picture was exhibited at the ‘Cannes Film Festival,’ which was a commercial success. Rai’s acting abilities were praised by critics.
In 2003, she received another another accolade for her acting abilities when she gave a stunning performance in Rituparno Ghosh’s Bengali film ‘Chokher Bali,’ which was based on Rabindranath Tagore’s novel of the same name. The film was a box office and critical hit.
She made her acting debut in the Hindi film ‘Khakee’ in 2004, playing a pistol moll. The picture had a mixed critical and commercial reception. In the same year, she starred alongside Vivek Oberoi in the film ‘Kyun! Ho Gaya Na…’. Commercially, the picture was a flop.
Aishwarya Rai received widespread praise for her performance in Gurinder Chadha’s British film ‘Bride and Prejudice’ in late 2004. The movie was a financial success. ‘Raincoat,’ directed by Rituparno Ghosh, was her next big Hindi film. In Hindi, the film received the ‘National Film Award’ for ‘Best Feature Film.’ She appeared in the film ‘Shabd’ in 2005. She was hailed for her ‘drop-dead stunning’ appearance in addition to her acting abilities. Her only notable achievement that year was a cameo in the film ‘Bunty Aur Babli,’ in which she sang the song ‘Kajra Re.’
‘Umrao Jaan’ and ‘Dhoom 2’ were her two cinematic releases in 2006. While Rai’s performance in ‘Umrao Jaan’ was praised by critics, ‘Dhoom 2’ was her first major box office hit since ‘Devdas.’ She also had a role in the British drama film ‘Provoked,’ for which she received favorable reviews.
‘Guru,’ directed by Mani Ratnam, starred her in 2007. The film received critical acclaim around the world and was a commercial success. Rai received significant appreciation for her outstanding performance. After a string of failures, she found fame in 2008 with the film ‘Jodhaa Akbar.’ She received a lot of appreciation for her outstanding performance in the film. In the same year, she co-starred in ‘Sarkar Raj’ alongside husband Abhishek and father-in-law Amitabh Bachchan.
In 2009, she appeared in the sequel to ‘The Pink Panther,’ in which she played a criminology expert. Rai featured in Mani Ratnam’s modern-day retelling of the Ramayana, ‘Raavan,’ in 2010. Her performance in the film, which was released in Tamil and Hindi, was lauded by critics.
Her next part was in the successful 2010 science fiction Tamil film ‘Enthiran,’ in which she starred alongside South Indian icon Rajinikanth. She later starred in the drama ‘Guzaarish,’ directed by Sanjay Leela Bhansali. Despite the film’s failure, critics praised her performance as one of her best to date. Due to her pregnancy, she took a hiatus from Bollywood after this film.
With ‘Jazbaa,’ she made a comeback in 2015. According to critics, Rai’s performance was the only reason for the film’s success. She starred in the biographical film ‘Sarbjit’ in 2016, and her performance was widely panned. In 2016, Rai’s most recent film was Karan Johar’s ‘Ae Dil Hai Mushkil,’ for which she earned favorable reviews.
In 2018, she starred alongside Anil Kapoor and Rajkummar Rao in the comedy-drama film ‘Fanney Khan,’ in which she played a singer.

‘Hum Dil De Chuke Sanam,’ ‘Taal,’ and ‘Devdas’ are some of Aishwarya Rai’s most well-known works. The critics praised her work with Bengali filmmaker Rituparno Ghosh on two of her films, ‘Chokher Bali’ and ‘Raincoat.’ Her performance in ‘Jodhaa Akbar’ was also praised by critics.

For ‘Hum Dil De Chuke Sanam’ (1999) and ‘Devdas,’ Aishwarya Rai received ‘Filmfare Awards’ for ‘Best Actress’ (2002). While she was nominated for ‘Best Actress’ for ‘Taal,’ she was nominated for ‘Best Supporting Actress’ for ‘Mohabbatein.’ She was given the ‘Padma Shri’ by the Indian government in 2009 for her contribution to the arts. It is India’s fourth highest civilian honor.
In 2012, she was given the ‘Ordre des Arts et des Lettres,’ a French national honor.

Salman Khan, a Bollywood actor, dated Aishwarya Rai in 1999. Khan’s “verbal, physical, and mental abuse” caused the pair to abandon their relationship in 2002. In 2004, she dated Vivek Oberoi.
While filming ‘Dhoom 2,’ she began dating actor Abhishek Bachchan. In January 2007, they announced their engagement, and on April 20, 2007, they married in Mumbai. Aaradhya, their daughter, was born on November 16, 2011.

Aishwarya Rai has a net worth of $100 million.

Aishwarya Rai is a well-known international celebrity with over 17,000 websites dedicated to her! She was honored with a wax figure in London’s Madame Tussauds exhibition in October 2004.