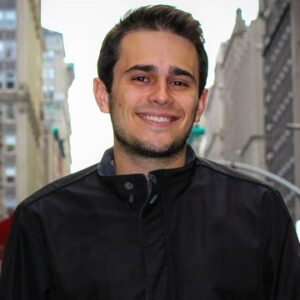 AJ Vaynerchuk is an entrepreneur from the United States who co-founded VaynerSports, an athlete representation agency, in 2016. He was also the former COO of VaynerMedia, a social media-first digital agency, and a founding partner of VaynerRSE, a venture capital firm. He began demonstrating his keen business sense at a young age, having been born into a family with a proclivity for entrepreneurship. Even before he was a teenager, AJ was raiding garage sales and selling toys for a profit with his older brother, Gary. As high school students, the brothers began dealing in domain names, and while in college, they began developing and selling websites. Gary had already established himself as a wealthy businessman by the time AJ graduated from college, having taken over the family’s liquor business from their father. AJ and Gary founded VaynerMedia, a social media-focused digital agency, in 2009. They were joining an emerging area by doing so, as social media was still in its infancy at the time. Despite the hazards, the brothers were able to create a successful and innovative business. AJ Vaynerchuk is also working on a few more commercial ventures.

The Career of AJ

AJ Vaynerchuk was born into a family of entrepreneurs and understood from a young age that he was destined for a career in business. He began selling toys when he was a child and progressed to building websites for sale as a college student.

In 2009, he joined his older brother Gary to create VaynerMedia, a social-first digital business based in New York City, after completing his studies at Boston University.

The two brothers put in a lot of effort to make this business a success, and they were soon able to add offices in San Francisco and Los Angeles. AJ also served as the company’s COO, overseeing operations and growth. GrapeStory, a mobile-first marketing firm, and production business was co-founded by AJ in 2013.

He was in charge of some areas of the company’s finances, business model, and growth. In 2014, the eager young man joined VaynerRSE as a partner.

This is a consumer technology-focused investment fund that will serve as a business incubator in addition to traditional angel investing.

AJ Vaynerchuk’s business career was on the rise, and he was doing incredibly well on the professional front, but he was dealing with health difficulties. In May 2016, he stepped down as COO of VaynerMedia to focus more on his health.

Around the same time, he departed GrapeStory. He co-founded VaynerSports, a full-service athlete representation agency, in June 2016. Players can use the firm for a number of services pertaining to their professional lives.

Sasha and Tamara Vaynerchuk gave birth to AJ Vaynerchuk. Gary is his brother, while Liz is his sister. He attended Boston University from 2005 to 2009 after finishing his education. He is currently married to a woman named Ali.

Since he was in his late teens, AJ has been suffering from Crohn’s Disease. He indicated at the time of his departure from VaynerMedia that it was becoming increasingly difficult for him to balance his business commitments with his sickness.

He has a net worth of $10 million and his wine business is worth $4 million because he is a successful entrepreneur who has been in business for a long time.