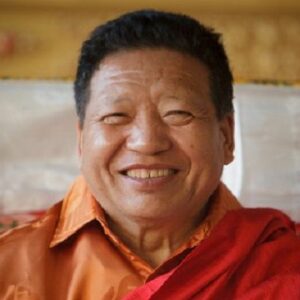 Tong Chöje Tulku Rinpoche, a member of the “Karma Kagyu” lineage, was a key figure in the spread of Tibetan Buddhism around the world. He was identified as the ‘tulku,’ or reincarnation of the previous Akong, at a young age. He was born in the Chamdo region of Kham, Tibet. He was taken away from his family when he was four years old, and before assuming his position as abbot and teacher, he obtained a conventional religious education at the monastery and became a specialist in Tibetan medicine. After leaving for exile in India, he later realized that hunger was the most fundamental need of all and worked to end it. He left India for the UK, where he helped create the Samye Ling monastery in Scotland and eventually constructed its London Center (now in a former library). His primary task had been to expand the ROKPA Charity’s operations, particularly in Tibet and Nepal, where he set up multiple soup kitchens to serve the hungry in big towns. He established for over 150 projects, each of which was a school, clinic, medical school, self-help program, or plan to preserve the environment. In 2013, he was visiting some of his philanthropic projects in China when he was slain in an attempted robbery.

On December 25, 1939, in Dharak Village, close to Riwoche in Kham, Eastern Tibet, Akong Rinpoche was born.

He was found at the age of two by the search team in the Chamdo region of Kham looking for the reincarnation of the former (1st) Akong, Abbot of Dolma Lhakang monastery close to Chakdado.
At the age of four, he was brought to Dolma Lhakang, where he acquired the academic and spiritual training required for him to reclaim his position as Abbot. He received training in traditional Tibetan medicine in addition to his studies in religion.

He traveled over the country as a teenager, performing religious rituals and attending to the ill. Later, he visited the renowned Secchen Monastic University, where Secchen Kongtrul Rinpoche gave him the Kagyu Buddhist lineage.

His additional spiritual education as a member of the Kagyu lineage was completed under the direction of HH the 16th Gyalwa Karmapa, and he received his certification as a Tibetan medicine teacher.

Akong Rinpoche and 300 other Tibetans escaped to India in 1959 after the Chinese occupied Tibet. He was asked to work as a teacher at the “Young Lamas Home School” in Dalhousie after spending time in refugee camps.

He was one of the first Tibetan tulkus to be transported to Western Europe from exile in the early 1960s. He spent several years as a hospital orderly after landing in England.

Together with Trungpa Rinpoche, he established “Samye Ling Monastery” in Scotland in 1967, the first Tibetan Buddhist center in Europe. Additionally, he contributed to the establishment of ROKPA International, a global humanitarian organization that mostly operates in Nepal and Tibet.

Later, he stayed in Europe and maintained the community at Samye Ling while his companions relocated to other nations. For the remainder of his life, he remained and continued to serve in the monastery in Scotland.

He also started a project called the “Tara Trust” to create useful kinds of psychotherapy and tried to advance the use of traditional Tibetan medicine in contemporary society.
He oversaw a group that traveled to Tibet in 1992 to look for the 16th Karmapa’s reincarnation. For the first time, exiled Tibetan lamas took a chance by asking the Chinese government to collaborate with them on their reincarnation hunt.

The remainder of his life was devoted to expanding his humanitarian initiatives in Tibet and other nations and to managing the Scottish monastery he co-teaching founded community.
In addition, he wrote a book called “Taming the Tiger: Tibetan Teachings for Improving Daily Life,” which intends to assist those who are looking for the real meaning of happiness and suffering.

In a Scottish valley, he helped co-found the “Samye Ling Monastery,” the first Tibetan Buddhist center in the West, in 1967. He described it as a peaceful, spiritual location that was accessible to people of all faiths.

In Tibet, he was able to launch more than 150 initiatives, including colleges, hospitals, orphanages, centers for vocational training, and environmental initiatives, all of which were focused on preserving Tibetan culture and the Tibetan language.

He later married and had four children, which was a blessing.
He was killed by stabbing on October 8, 2013, along with two other monks, including Rinpoche’s nephew, and his chauffeur in Chengdu, China, during an attempted heist. Three Tibetan prisoners who confessed to their crimes were detained by authorities.

He was initiated as a monk at the age of four, and his body was burnt at a monastery in Tibet.

One of the wealthiest and most well-known entrepreneurs is Akong. According to our research, Forbes, Business Insider, and Wikipedia, Akong Rinpoche is worth $5 million.