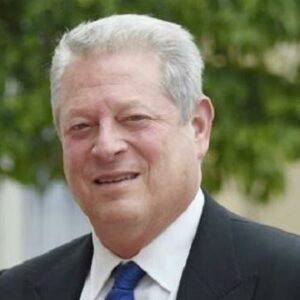 Al Gore is an American politician who served as the United States’ 45th Vice President from 1993 to 2001. He is also a well-known environmentalist who shared the Nobel Peace Prize for his efforts in the sector. Gore has held positions in both the White House and the Senate during his political career. Before beginning his political career, he briefly served in the military during the Vietnam War. In 1984, he was elected to the US Senate, and four years later, he ran for the Democratic presidential nomination, but lost to Michael Dukakis. He is most remembered as a senator for advocating for the passage of the High Performance Computer and Communication Act, which dramatically aided the expansion of the internet. Bill Clinton chose Al Gore to be his running mate in the 1992 presidential election, and he went on to become the Vice President of the United States after Clinton defeated George W. Bush. After defeating the Republicans, Gore and Clinton were re-elected in the next term. He is currently the chair of the Alliance for Climate Protection, as well as the co-founder and chair of Generation Investment Management, outside of politics. He is also a member of Apple Inc’s Board of Directors and a Google senior advisor.

Albert Arnold “Al” Gore, Jr. was born in Washington, D.C. on March 31, 1948. His father, Albert Gore Sr., was a senator in the United States Senate. Pauline LaFon Gore, his mother, was one of the first female graduates of Vanderbilt Law School.
Gore attended Washington, D.C.’s St. Albans School. He excelled in sports such as basketball and football, and he was also passionate about painting.
He enrolled at Harvard College in 1965, intending to major in English and pursue a career as a novelist.
After graduating in 1969, he joined the army. Despite his opposition to the war, he believed that serving in the army was a civic responsibility. Gore and his father also believed that this would help Al Gore’s re-election chances. Gore Sr., on the other hand, lost the election.

Al Gore began his career as an investigative reporter for the Nashville, Tennessee-based daily ‘The Tennessean.’ Meanwhile, he was a student at Vanderbilt University, where he studied law and philosophy.
His time as a journalist contributed to his decision to become an attorney since he believed that while he could expose corruption, he couldn’t do anything to fix it. He quickly dropped out of law school, however, and decided to run for a position in the United States House of Representatives.
He was elected to the United States House of Representatives in 1976 and was re-elected three times before taking a seat in 1984. He was regarded as a’moderate’ during his term in Congress.
He opposed federal financing for abortion, voted in favor of a bill requiring schools to hold a moment of silence, and voted against a prohibition on interstate gun sales. He claimed that while he did not believe homosexuality was wrong, he did not believe it was an acceptable alternative that society should embrace.
He ran for the Democratic presidential nomination in 1988, but was defeated by Michael Dukakis. He later became Bill Clinton’s running mate during the 1992 US Presidential elections, despite his initial reservations.
Clinton reportedly chose Gore because of his foreign policy experience, environmental activities, and commitment to his family.

Vice President of the United States

Bill Clinton became the 42nd President of the United States after defeating George W. Bush in the 1992 US Presidential elections, with Al Gore as his vice president.
Gore is best known for assisting the Clinton administration in getting the North American Free Trade Agreement passed by Congress. As an Atari Democrat, he was instrumental in the advancement of information technology. From 1995 to 2001, this resulted in the dot com boom.
The term ‘Information Superhighway,’ coined by Al Gore, became associated with the internet. He also had a role in the development of the National Information Infrastructure. He discussed his plans to prioritize information technology in January 1995. In the same year, the official White House website was launched. He also got interested in a number of environmental initiatives. On Earth Day 1994, he founded the GLOBE program, which was an educational and science exercise. During this period, he became involved with Digital Earth.
After defeating the Republicans led by Bob Dole, Gore and Clinton were re-elected to a second term in 1996.

In 1999, Al Gore stated that he would run for President of the United States in the year 2000. He campaigned as a moderate Democrat, focusing on healthcare, the economy, and education.
He also advocated for the Democratic Party’s past tenets, such as supporting abortion rights and tightening gun laws. He was a staunch supporter of environmental protection initiatives. In the book ‘Earth in the Balance: Ecology and the Human Spirit,’ he shared his thoughts on the subject.
After defeating former Senator Bill Bradley, he comfortably secured the Democratic presidential nomination. Senator Joseph Lieberman was selected as his presidential running mate. George W. Bush, a Republican, was eventually declared the winner and elected President of the United States.

Other Projects of Al Gore

Since 1976, when he was a rookie lawmaker, Al Gore has been interested in environmental problems. He convened the first hearings on climate change, global warming, and toxic waste in Congress.
He formed The Alliance for Climate Protection and founded Generation Investment Management, where he serves as chairman. He also became a vegan in response to environmental concerns, and he has spoken out about how the meat business contributes to the global warming disaster.
He was given the Nobel Peace Prize in December 2007 for his efforts on global warming. He claimed that China and the United States were the largest carbon polluters, and that they should take the most drastic measures, or they would be held responsible for their failure to act throughout history. The prize was split between him and the Intergovernmental Panel on Climate Change.
He recently met with Donald Trump and his daughter Ivanka Trump to discuss environmental issues. ‘Earth in the Balance’ (1992), ‘Common Sense Government’ (1998), ‘The Spirit of Family’ (2002), ‘The Assault on Reason’ (2007), and ‘The Future’ are some of his books (2013).

Al Gore has written a number of books, the most notable of which is ‘Earth in the Balance: Ecology and the Human Spirit.’ The book was released in June 1992, just before he was elected Vice President of the United States. The book discusses the world’s condition and proposes a variety of measures to address the most serious issues.
‘An Inconvenient Truth: The Planetary Emergency of Global Warming and What We Can Do About It,’ by Al Gore, is another essential book (2006). It was released to coincide with the release of the film of the same name. Gore’s lecture tours on the topic of global warming were the inspiration for the book. After three years, an audiobook version of the record was published, winning the Grammy Award for Best Spoken Word Album.

In 2007, Al Gore received the Nobel Peace Prize (jointly with the Intergovernmental Panel on Climate Change). In the same year, as a stakeholder of Current TV, he received an Emmy Award for his efforts on global warming.
He starred in ‘An Inconvenient Truth,’ which earned the Academy Award for ‘Best Documentary.’ The audiobook adaptation of the same-named book was also nominated for a Grammy Award for Best Spoken Word Album.
The 1969 National Defense Service Medal, the Prince of Asturias Award (2007), and the Sir David Attenborough Award are among his numerous honors (2007). Numerous universities have bestowed honorary doctorates on him.

In 1970, Al Gore married Mary Elizabeth Aitcheson. She and Gore had gone to the same college. Their wedding took place at the National Cathedral in Washington, D.C. Karenna Gore, born in 1973, Kristin Gore, born in 1977, Sarah LaFon Gore, born in 1979, and Albert Arnold Gore III, born in 1982, are their four children. The couple divorced in 2010 after 40 years of marriage.
Al Gore was rumored to be dating Elizabeth Keadle in 2012.