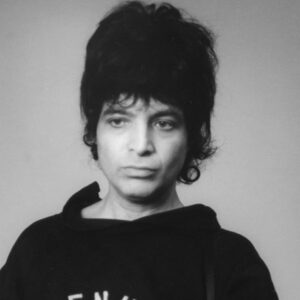 Alan Vega was a multi-talented artist who worked as a sculptor, singer, songwriter, and photographer. This singer and guitarist began his career as a graphic artist before co-founding the electro-punk band ‘Suicide.’ He made unorthodox artworks using inarticulate elements such as neon lights and variously shaped lights to communicate a radical message. One of his paintings, which was on exhibit at Lyon’s ‘Museum of Contemporary Art,’ portrayed a cross with Jesus and Muhammad Ali’s faces coexisting. His foray into electro-punk began while he was still dabbling in electronic art and had the opportunity to see the Stooges perform. This musician went on to pave the way for the future of electro-punk music by teaming up with his friend Martin Reverby, who plays the keyboard for their band ‘Suicide.’ Alan’s signature ‘Rockabilly style,’ along with Martin Reverby’s repeated keyboard sounds, identified the duo as the forerunners of a new electro-punk genre. Alan went on to explore new musical possibilities with his solo interpretations over the years, establishing a place for himself. He went on to publish one of his collections of photographic works combined with poems, demonstrating his acute sense of photography. In addition, he published a compilation of his poetic writings.

On the 23rd of June, 1938, this great guy, originally named Alan Bermowitz, was born into a Jewish family in the city of Brooklyn. At the elite ‘Brooklyn College,’ he studied Physics and Fine Arts. His Fine Art professors, Kurt Seligmann and Ad Reinhardt, had a significant influence on his work.

Following his graduation in 1960, he became involved with the ‘Art Workers’ Coalition (AWC),’ which advocated for museum policy reform. In New York, he also co-founded the ‘Projects of Living Artists,’ a first-of-its-kind alternative venue administered by artists.

Alan, a fine arts graduate, began his career as a visual artist in the early 1970s, sculpting sculptures out of electrical waste. The ‘AWC’ founded the ‘Projects of Living Artists’ in Soho, New York, where his sculptures were on show.
In 1970, after being inspired by the performance of the proto-punk band ‘Iggy and the Stooges,’ this frontman formed his own band, ‘Suicide,’ with instrumentalist Martin Reverby. The band’s unusual musical style went on to inspire future generations of electronic musicians around the world.

The band used to perform at the ‘OK Harris gallery’ in the beginning, but then moved to a location called ‘Projects of Living Artists.’

Mari Reverby, a drummer, joined the band in 1971 after Paul Liegbott, the founding guitarist, left the group. After performing at venues such as the Mercer Arts Center, Max’s Kansas City, and CBGB, the band gained a lot of attention.

Despite the release of two albums, the band was met with criticism and struggled to acquire traction. However, in 1980, this vocalist’s first solo album was published, with the hit single “Jukebox Babe.” The song drew the attention of major record companies.

With his 1981 album, ‘Collision Drive,’ Alan’s signature ‘Rockabilly’ approach lived on. His works, which combine’minimal music’ with repeating notes, were heavily influenced by his instructor, Ad Reinhardt’s approach.
After establishing himself as a painter, Vega transitioned to visual art and displayed his work at the ‘Ok Harris’ gallery, where he had been granted residency. His show was on display at the gallery from 1972 to 1975.

In 1982, he showed his artwork at the ‘PS1 Art Institute’ in Long Island City, New York.
Vega’s longtime pal Rick Ocasek produced the album ‘Saturn Strip,’ which was published in 1983 by the label ‘Elektra Records.’ The CD was well-received by critics all over the continent.

In 1985, the album ‘Just a Million Dreams’ was released under much controversy, since Rick Ocasek was replaced as producer by Chris-Lord-Alge. Following this replacement, the singer’s fortunes swung completely against him. Vega was even considered for removal from the album at one point.

In 1988, the band ‘Suicide’ published their third album, titled ‘A Way of Life,’ in collaboration with Rick Ocasek. Following the album’s release, the band embarked on a European tour.
In 1990, the band released their fourth album, ‘Why Be Blue.’ Stefan Roloff developed a music video for the song ‘Dominic Christ,’ which appears on this album, and ‘Wax Trax Records’ released it to the public.

Vega has been experimenting with vocals for nearly three years, since the release of ‘A Way of Life.’ His fifth solo album, ‘Deuce Avenue,’ was released in 1990, and it contained the compositions he wrote at this time.
Another solo, ‘Power on to Zero Hour,’ was released in 1991, and featured lyrics that resonated with the world’s war-torn conditions.

In 1991, Alan Vega’s compilation of images and poetry, ‘Alan Vega: Deuce Avenue War/The Warriors v3 97,’ was released, marking a watershed moment in his career. Henry Rollins published another of his works, ‘Cripple Nation,’ a compilation of fiction, poetry, and lyrics, later that year.
With his 1995 CD ‘New Raceion,’ he wanted to display the immense ethnic diversity in the musical globe in collaboration with various other guitarists.

This vocalist cooperated with a number of artists, including Mika Vainio and Ilpo Vaisanen, who were known as ‘PanSonic’ and released the album ‘Endless’ in 1998 under the moniker ‘VVV.’ He also composed the music for Phillipe Grandrieux’s film ‘Sombre.’
In 1999, he published his next album, ‘2007,’ a composition that reflected his personal experiences and beliefs but received little critical acclaim.

Shortly after the September 2001 disaster, ‘Suicide’ published their next album, ‘American Supreme,’ which echoed public views.

He organized an art exhibition at a gallery called ‘Deitch Projects’ in January 2002, at the request of renowned art dealer Jeffrey Deitch. His signature floor sculptures and wall pieces carved out of electronic debris were featured in the show.

This musician sang two tracks on DJ Hell’s CD, ‘NY Muscle,’ released in 2003.
Vega released the album ‘Resurrection River’ in 2004 in collaboration with musicians Vainio and Vaisanen for the second time.

In 2007, the label ‘Blast First Records’ published this vocalist’s ninth solo album, titled ‘Station.’ The CD showcases his classic approach as well as his progress throughout time.

In 2009, the ‘Museum of Contemporary Art’ in Lyon, France, hosted a show of Vega’s work. Various technological items such as neon lights, wires, adapters, and multi-colored light strings were used in the works on show to create visuals that were radical in character.

He met Elizabeth Lamere, whom he eventually married, during the period preceding the start of ‘Deuce Avenue.’ Dante is the couple’s son.
David Nobahkt wrote ‘No Compromise,’ a documentary-biography about ‘Suicide,’ which was released in the UK in late 2004.

Two short documentaries about Alan Vega and his work were screened at the ‘Deitch Projects’ in 2009. The first was Hugues Peyret’s ‘Autour d’Alan Vega (extraits) (1998)’, and the second was Christian Eudeline’s ‘Alan Vega (2000)’.
Vega died in his sleep on July 16, 2016 in New York City, New York, at the age of 78.While a student of Fine Arts at Brooklyn College, the singer adopted the moniker ‘Alan Suicide.’

Alan Vega a well-known musician, had a net worth of $1-5 million before he died.