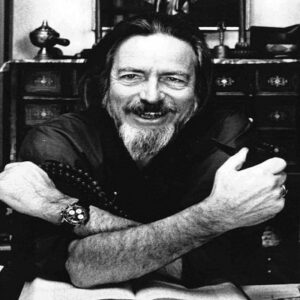 Alan Watts was a well-known British philosopher, author, and lecturer who was most recognized for his Westernized version of Eastern philosophy. He was born in England to Christian parents and became interested in Buddhism while still a student at King’s School in Canterbury. He then joined the Buddhist Lodge, where he encountered a number of professors and spiritual teachers who helped him refine his thoughts. He was a prolific writer who began writing when he was fourteen years old. Several of his early writings were published in the Lodge’s journal. He moved to the United States at the age of twenty-three, when he first got Zen master training but departed before being ordained. He then went to Chicago to study Christian texts and serve as a priest for six years before moving to San Francisco to pursue an academic career. Simultaneously, he began giving speeches on Eastern philosophy, which quickly gained a large following both at home and abroad. He left an audio archive of approximately 400 presentations, in addition to producing more than 25 books, which are currently in high demand.

Alan Wilson Watts was born on January 6, 1915, in the Kent village of Chislehurst, which is now part of south-east London. Laurence Wilson Watts worked for Michelin Tyre Company, while his mother, Emily Mary Watts (née Buchan), was a stay-at-home mother.

Alan grew up alone by the creek, learning to recognize wildflowers and butterflies as his parents’ only child. His mother’s family, which was religiously minded, had a significant impact on his childhood as well.
He had a specific interest to China and Japan when he was a child. Romantic tales from the Far East piqued his interest. His mother was once given with a few Far Eastern paintings and embroidery by some missionaries returning from China. Even though he was young, he was enthralled by them.

Alan Watts began his education at Saint Nicolas Kindergarten before attending King’s School in Canterbury. Apart from academics, the school also offered Muscular Christianity religious training, which Alan found to be somewhat bleak. Throughout his school years, though, he thrived academically.

He traveled to France with Francis Croshaw, a wealthy Epicurean who initially piqued his interest in Buddhism while he was still in school. He began reading about Buddhism and eventually joined the London Buddhist Lodge, which is now known as the Buddhist Society.

He began studying modern history after completing his general studies at the age of fifteen, with the goal of receiving a scholarship at Trinity College, Oxford. He wanted to study philosophy, but he didn’t have the resources to do so. He was also chosen as his house’s senior prefect and captain.

Unfortunately, he did not receive the scholarship and dropped out one term before the end of the school year. Because he lacked the financial wherewithal to continue his education, he took jobs at a printing house and then a bank.

At the same time, he began volunteering at the Buddhist Society in his leisure time. He read a lot of philosophy, history, psychology, psychiatry, and Eastern knowledge while he was there. He was primarily self-educated, despite receiving help from Dimitrije Mitrinovi and Christmas Humphreys.

Watts was appointed Secretary of the Buddhist Lodge in 1931, when he was sixteen years old. During this time, he also met spiritual authors such as Dr. Sarvapalli Radhakrishnan, Nicholas Roerich, and Alice Bailey, and absorbed a great deal from them.

He released his first book, ‘An Outline of Zen Buddhism,’ in 1932, when he was seventeen years old. It was only a 32-page pamphlet, but it was well-received by academics and is still in print. He eventually rose to the position of editor of ‘Buddhism in England.’

He met Daisetsu Teitaro Suzuki, a renowned Zen Buddhist scholar, at the World Congress of Faiths at the University of London in 1936. He had already read his books, and the meeting had piqued his interest.
His second book, ‘The Spirit of Zen: A Way of Life, Work, and Art in the Far East,’ was released in 1936. ‘The Legacy of Asia and Western Man’ came next (1937).

He and his family moved to the United States of America from England in 1938. They first settled in New York, where he began rigorous Zen Buddhist studies. He was unable to adapt to his teacher’s methods, and as a result, he left without being ordained as a Zen monk.

He enrolled in Seabury-Western Theological Seminary, an Episcopal (Anglican) school in Evanston, Illinois, in search of a vocational outlet for his spiritual inclinations. He studied Christian texts, theology, and church history at this institution.

After completing his master’s degree from the seminary in 1945, he became an Episcopal priest and became the chaplain of Northwestern University in Chicago. He was well-liked by the students, who joined him in a lively debate on Christian and Eastern philosophy.

Watts wrote three volumes on Christian mysticism during his time in Chicago. He did, however, have a difficult time reconciling his Buddhist ideas with Christian doctrines. Furthermore, he became involved in an extramarital affair. As a result, he left Chicago in early 1951 and relocated to San Francisco.
He became a faculty member of the American Academy of Asian Studies in San Francisco, where he met numerous international experts. Sabur Hasegawa, a well-known Japanese painter, was a major influence on him, and he learned a lot from him about Japanese art, customs, and perceptions of nature.

He also took advantage of the opportunity to learn Chinese and Chinese brush calligraphy. He also studied a variety of other areas, including Vedanta, quantum mechanics, and cybernetics.

Watts went on to become the Academy’s Dean. He began giving frequent speeches on Berkeley’s free radio station, KPFA, from then on. His presentations drew a diverse group of people. Simultaneously, he continued to write and published his best-selling book, ‘The Way of Zen,’ in 1957.

He’s also been experimenting with psychedelic drugs and their effects on spiritual insight for a while now. He started with mescaline. After that, in 1958, he worked on LSD with a group of other researchers, taking the substance multiple times. He later worked with marijuana and will discuss its impacts in his next books.
Watts went on a European tour in 1958. When he returned to San Francisco, he taped two seasons of ‘Eastern Wisdom and Modern Life’ for the KQED television station.

He visited Japan multiple times beginning in the early 1960s. He also received a scholarship at Harvard University from 1962 to 1964, and in 1968, he became a scholar at San Jose State University. By the late 1960s, he had established himself as a counterculture celebrity with a large following as well as detractors. Soon after, he began speaking at colleges and growth centers across the United States and Europe, and by the early 1970s, he had established himself as the most significant interpreter of Eastern ideas in the Western world.

Alan Watts was a prolific author who published over 25 books. ‘Way to Zen’ is the most important of them all. The book, which was published in 1957, focuses on philosophical explanations as well as the history of Zen Buddhism in China and India. It rapidly became a best-seller, boosting his popularity.

Alan Watts was married three times. At the Buddhist Lodge in 1936, he met Eleanor Everett, with whom he married in April 1938. Joan, their oldest daughter, was born in November 1938, and Anne, their youngest, was born in 1942.
Watts had an adulterous romance with Jean Burden near the end of the 1940s, and Eleanor had their marriage annulled as a result. Despite the fact that he never married Jean, she was always on his mind. Ruth Fuller Everett, his mother-in-law, was also in touch with him.

Watts married Dorothy DeWitt in 1950. Tia, Mark, Richard, Lila, and Diane were their five children. Watts met Mary Jane Yates King while on a lecture tour in New York in the early 1960s, and the marriage dissolved. Watts and King married in the same year that their divorce was granted.

Watts resided with King in Sausalito, California, until the middle of the 1960s. He began to split his time between Sausalito and Druid Heights, which is located on Mount Tamalpais’ southwest flank. He was living in a lonely hut here. He resumed his lecturing trips at the same time.

He returned from one of these trips to Europe in October 1973 and stayed at his cottage in Druid Heights. On November 16, 1973, he died peacefully in his sleep there. Half of his ashes were interred beside his library at Druid Heights, while the other half were buried at the Green Gulch Monastery.

Watts’ legacy lives on in the form of around 25 books and a nearly 400-speech audio library. His books are not only being republished but recordings of his audio lectures are also being released in written format to meet their ever-increasing demand.

Watts is taught at Saybrook University in the United States. Watts academic chair was also established at this university.

Alan is one of the richest Philosopher & listed on most popular Philosopher. According to our analysis, Wikipedia, Forbes & Business Insider, Alan Watts net worth is approximately $1.5 Million.