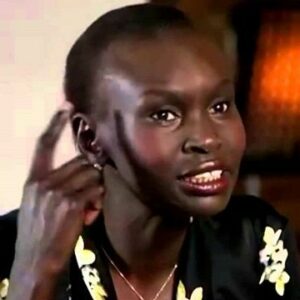 Alek Wek is a well-known African supermodel who was born in South Sudan. A civil war erupted in her nation during her childhood, causing her parents and eight siblings to evacuate. On the way, her father died. After a few years, the entire family was able to relocate to London. It was here that she completed her education and was found at a party by a modeling scout. The next year, she relocated to New York to sign with Ford Models. Many black women, like famed actress Lupita Nyong’o, have been inspired by her work, and many have been forced to reconsider their perceptions of typical Caucasian beauty. She has always been self-assured and has been a voracious learner. Her tremendous self-esteem shines through in her work, and she is an inspiration to many. She believes that the platform that the modeling profession has offered her should be put to good use. She works with a number of philanthropic organizations and is the Sudanese face of the UN Refugee Agency. She wants to highlight the terrible realities of her country’s convicts and raise awareness about the refugee situation. Read the following biography to learn more about her life and work.

She was the seventh of nine children in her family, born to Akuol, a homemaker, and Athian, an education official. Wek recalls a calm and tranquil childhood despite her family’s great poverty.
From the time she was born until she was 14, she had psoriasis, a skin ailment. When she and her family relocated to London, it cleaned up due to climate change.

In 1985, Sudan’s civil conflict erupted, forcing the Wek family to escape their now-dangerous home. After an infection sprang out in his hip due to previous surgery, her father died on the way.

Wek’s family finally moved to London in 1991, but Alek struggled to acclimate to the frigid temperature. Her dark skin and accent were targeted by bullies at school. She majored in fashion business and technology at ‘London’s College of Fashion.’

Her first major break came in 1995, when she starred in Tina Turner’s music video for “GoldenEye.” She also appeared in Janet Jackson’s music video “Got ‘Til It’s Gone” the following year.

She was signed to Ford Models, a famous agency based in New York City, in 1996. She was chosen to participate in Ralph Lauren’s runway show within a year of arriving in New York, a coveted spot normally reserved for established models rather than newcomers like Wek.

She was featured on the cover of “Elle” magazine for the first time in 1997, making her the first African woman to do so.

She was taken for a calendar in 1999, and the artist Joanne Gair painted her body in vibrant colors.
In 2002, she made her acting debut in the film “The Four Feathers,” in which she played a Sudanese princess, and she also participated in a Gap advertisement.

In 2005, she founded ‘wek1993’. It’s a collection of handbags sold at Selfridges department shops. ‘wek1993’ is a piece dedicated to her father, named after his birth year and inspired by the briefcases he used to carry.

‘Alek,’ her first book, was published in 2007. She recounts her experiences as an immigrant and her struggle to be treated fairly in the industry in this book. She acknowledges that several of her modeling jobs had racist overtones.
She was featured alongside Tyra Banks and Kimora Lee on the cover of ‘Ebony’ magazine. The photoshoot was published on the magazine’s September 2007 cover.

She appeared as a guest judge alongside Tyra Banks on the hit reality show “America’s Next Top Model” in 2011.

She signed a campaign with ‘Marks & Spencer’ in 2014, which was a big career and personal milestone for her because she used to shop there as a teenager.

Within a year of relocating to New York, Ralph Lauren chose her to walk in his runway show, an unparalleled feat for a new model. This project pushed her modeling career and helped her get a strong foundation in the profession, which is dominated by white people.

She wrote an autobiographical book in 2007 to raise awareness about her journey from immigrant to supermodel.

‘MTV’ and ‘i-D Magazine’ both named her ‘Model of the Year’ in 1997. In the same year, she became the first African to feature on the cover of ‘Elle’ magazine.

On Channel 5’s ‘World’s Greatest Supermodels’ list, she was ranked #14 overall.
She was named one of the ’50 Most Beautiful People’ by ‘People’ magazine in 1999.

She joined the US Committee for ‘Refugees Advisory Council’ in 2002 as an advisor, where she helps raise awareness about the difficulties facing Sudan and refugees around the world.

In 2003, she began a relationship with Riccardo Sala, an Italian real estate entrepreneur. It was rumored that the couple had broken up after an eleven-year relationship.

She returned to her native country in July 2012 with the ‘UN Refugee Agency’ in an effort to raise awareness about how much work has to be done in order to rebuild the country.

Lupita Nyong’o, a Kenyan actress, delivered a speech in 2014 in which she discussed her low self-esteem as a child due to her beauty. When she saw Wek in the media, though, she realized that she, too, could be attractive. Nyong’o has since received numerous accolades for her work, including an Academy Award.

In Sudan, she continues to work for a number of philanthropic organizations, including ‘World Vision,’ ‘UNICEF,’ and ‘Doctors Without Borders.’

Alek Wek has a net worth of $20 million and is a South Sudanese-British model and designer. Alek Wek was born in April 1977 in Wau, South Sudan. She fled Sudan’s civil conflict in 1991 for the United Kingdom, and she now lives in Brooklyn, New York City.

‘Black Spotted Cow’ is the meaning of her name. Her niece, Ataui Deng, is a well-known runway model.
Her mother was frightened when she learned she was planning to sign with a modeling agency, believing her daughter would become a ‘Page 3’ girl.

When she first started out, she was frequently mistaken for Naomi Campbell, a very different-looking Jamaican model.