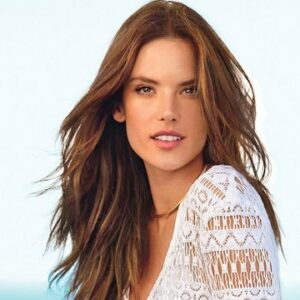 This long-legged Brazilian beauty didn’t have to work very hard to be noticed and possibilities in the fashion industry. With a face as stunning as her body, Alessandra Ambrosio began modeling when she was in her teens and was quickly spotted by top modeling agencies and fashion designers throughout the world. Her charming demeanor, hourglass shape, and whimsical demeanor helped her carve out a successful career. This international supermodel has walked the runways for practically all of the world’s leading designers and fashion labels, posing for some of the world’s best photographers. She has worked on marketing campaigns and endorsements for a variety of high-end goods. She has been a spokesmodel for Victoria’s Secret’s PINK line for over ten years and is a global ambassador for the lingerie business. This fashion legend has featured on the covers of over 70 international magazines and editorials, including Vogue, GQ, Harper’s Bazaar, Elle, Glamour, Marie Claire, and Cosmopolitan. She is one of the world’s wealthiest supermodels, with a broad career that includes modeling, fashion brand ambassadorship, fashion design, and social work. She has launched her own brand of swimwear and formal dress for young women as the world’s top lingerie model.

Alessandra Corine Ambrosio was born on April 11, 1981, in Erichim, Rio Grande do Sul, Brazil, to parents who owned a fuel station and had Italian, Polish, and Portuguese ancestry.

She began taking local modeling classes when she was 12 years old, and two years later, in 1996, she competed in Brazil’s famed ‘Elite Model Look’ competition, where she placed among the top 20 finalists.

She began modeling at the age of 15 for Dilson Stein, who is recognized with discovering top models such as Gisele Bundchen and Caroline Trentini.

Her modeling career took off when she was featured on the cover of Brazilian Elle magazine. After that, she was signed by Guess for its Millennium Campaign in the Fall of 2000.

In the year 2000, she was hired by the American lingerie company ‘Victoria’s Secret,’ and she made her catwalk debut at their fashion show.
As a branch of Rosa Cha, she debuted her own swimwear line, Alessandra Ambrosio by Sais, in 2004. It was favorably welcomed, with 10,000 units sold in its first month.

She walked the runway during the 2005 Victoria’s Secret Fashion Show in lingerie made entirely of sweets.
She appeared on the cover of Marie Claire’s July issue in 2009, alongside Sacha Baron Cohen, to promote his film ‘Bruno.’

Ale by Alessandra, her own fashion and lifestyle brand, was launched in collaboration with Cherokee, a US retailer, and offers a selection of women’s formal attire for ages 18 to 25.
She is the National Multiple Sclerosis Society’s ambassador, assisting those in need through public statements and the use of her name and image.

She made her screen debut in the hit James Bond film ‘Casino Royale’ in 2006, as a tennis player.
Apart from being a guest judge on ‘The Tyra Banks Show’ and ‘Project Runway,’ she has made special appearances on television on ‘Entourage,’ ‘Late Night with Conan O’Brien,’ and ‘The Late Late Show with Craig Kilborn.’
In 2007, she appeared alongside Miranda Kerr, Adriana Lima, Marisa Miller, Heidi Klum, and Selita Ebanks in the ‘How I Met Your Mother’ drama series episode titled ‘The Yips.’

She has been on the covers of Vogue, Harper’s Bazaar, Ocean Drive, Lui, Wiener, Self, GQ, Elle, Cosmopolitan, Flair, Vanity Fair, Russh, Marie Claire, Numero, and Grazia, among others.
Ocean Drive, Vogue, Glamour, Love, W, Lui France, V, Harper’s Bazaar, S Moda for El Pais, and Interview are just a few of the high-end editorials in which this Brazilian beauty has appeared.

In 2004, she became one of Victoria’s Secret Angels and the first ever brand ambassador for the company’s PINK range, earning her international notoriety.
Despite being pregnant with her second child, she walked the Victoria’s Secret Fashion Show in 2011, showcasing the biggest wings ever, weighing in at a whopping 30 pounds.

She walked the Victoria’s Secret runway in 2012 wearing the $2.5 million gem-studded ‘dream bra’ – ‘Floral Fantasy Bra,’ made by London Jewelers and set with 5,200 precious stones, including a 20-carat white diamond centerpiece.
This lovely brunette, who has a jaw-dropping body, was the first female model to appear in ‘Made in Brazil,’ a leading fashion magazine dedicated solely to Brazilian male models.

In 2001, she began dating fellow model Marcelo Boldrini. However, her hectic schedule and growing popularity got in the way of their relationship, and they split up in 2005.

In 2005, she began a love connection with Steve Allain, a Brazilian magazine editor. However, due to extensive media intervention, the romance only lasted a few months.

Alessandra Ambrosio has a net worth of $80 million.

She had plastic surgery on her ears when she was 11 years old to have them pinned back owing to her fear about their huge size, only to have difficulties two years later.

She adores surfing and has won multiple surfing competitions since she was a teenager, long before she considered pursuing a modeling career.

To stay active and in shape, this stunning Victoria’s Secret model practices samba, aerobics, and Capoeira, a Brazilian martial art.