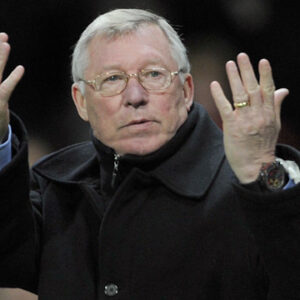 Alex Ferguson is a former football player who spent 26 years as the manager of Manchester United Football Club. He is regarded as the most successful manager in the game’s history, as well as the one who held the position for the longest time. He started his career as a player for Queen’s Park but was unable to gain a regular spot. After that, he went on to play for St. Johnstone and subsequently Dunfermline. He was so enamored with the game that he couldn’t stay away from it even after his playing days were done. Accepting a managerial role with the East Stirlingshire, he embarked on a new chapter in his career. He had a reputation as a stern coach who demanded nothing less than the best from his players. He went on to manage St.Mirren and Aberdeen over the years, and was responsible for a near-miracle transformation in the players’ performance. Manchester United signed him as a good manager with a good reputation in order to turn around the team’s poor results. He kept the job for many years, assisting the squad in winning prestigious trophies and becoming Manchester United’s all-time most successful manager.

Alex Ferguson is the son of Alexander Ferguson Sr. and Elizabeth Ferguson. He grew up in a lower-middle-class neighborhood.

He attended Govan High School and Broomloan Road Primary School. He was a bright young man who, however, had little interest in academics and preferred to spend his time playing football.

Alex spent his childhood kicking around a football with his father, brother, and the neighborhood lads because his father was an amateur football player.

In 1957, he made his amateur debut with Queen’s Park. He appeared in 31 games for the team and scored 20 goals, but he was unable to establish himself as a regular member of the squad.
He joined St. Johnstone in 1960 and scored 15 goals in 31 league games.

In 1964, he got a professional football deal with Dunfermline Athletic. With 31 goals in the 1965-66 season, he and Celtic’s Joe McBride lead the Scottish League. He scored 45 goals in 51 outings this season alone.

In 1967, his success with Dunfermline earned him a record-breaking £65,000 contract with Glasgow Rangers. He only stayed with the squad for two seasons before leaving. In 41 league games, he had managed to score 25 goals.
In 1969, he joined Falkirk and was promoted to player-coach. He was ousted from this post by the new management after four seasons, prompting him to leave the team. He spent some time with Ayr United before retiring from the game.

In June 1974, he accepted a part-time managing role with East Stirlingshire, but was quickly tempted away by rivals St. Mirren. He began working for St. Mirren in October 1974 and remained there until 1978, when he was sacked.
In June 1978, he replaced Billy McNeill as Aberdeen’s manager. After his arrival, the team’s performance improved significantly, and he helped them win the Scottish First Division in 1980. He won the Cup Winner’s Cup, the UEFA Super Cup, and various more league titles during his time with Aberdeen, which lasted until 1986.

In 1986, he was given the manager’s job at Manchester United, which he accepted and took over from Ron Atikinson. It was a well-known outfit, but it had been struggling recently. He was a tough coach who brought in new players including Steve Bruce, Brian McClair, Neil Webb, and Paul Ince. Despite his efforts, the club did not win a major championship until 1989.

The team’s first major achievement came in 1989-90, when they defeated Crystal Palace in the FA Cup final. In 1991, the squad won the UEFA Cup Winners’ Cup and the Super Cup after regaining their winning ways. Ferguson guided his team to a slew of other titles over the decade, including Premier Leagues, FA Cup doubles, and the UEFA Champions League.

The team won the ‘treble’ in the 1998-99 season, winning the FA Cup, the league, and the UEFA Champions League. Manchester United had become the most recognized and wealthy football club in the world by this time.

Under Ferguson’s capable leadership, the squad continued its winning streak and was as successful as ever in the new millennium. They won their sixth Premier League title, and for the seventh time in nine years, they were crowned English champions. Ferguson considered retiring at the end of the 2001-02 season, but instead elected to extend his contract with United for another 11 seasons.

In 2004, the squad won the FA Cup for the final time under his leadership. In 2006, the team won the League Cup after defeating Wigan Athletic 4-0 in the final.

Ferguson was Manchester United’s longest-serving and most successful manager in the club’s history. He won 13 Premier League crowns, 5 FA Cups, and 2 Champions League Trophies over his 26-year career (1986-2013).

In 1999, he was knighted in the United Kingdom for his contributions to football.
In 2012, the International Federation of Football History and Statistics (IFFHS) named him the World’s Best Coach of the Twenty-First Century.

In 1966, he married Cathy Holding, with whom he has three kids. His son, Darren, is a former Scottish football player and manager.

This well-known football coach is a UNICEF UK Ambassador.
Because of his disposition, he was dubbed “Furious Fergie.”

A bronze statue of him has been built in Old Trafford, designed by sculptor Philip Jackson.