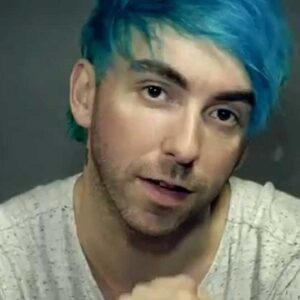 Alex Gaskarth is an English-American singer, musician, and lyricist who rose to prominence as the lead vocalist, rhythm guitarist, and lyricist of All Time Low, an American rock band that he and three friends established in 2003. Alex also hosts a podcast. He and his best buddy Jack Barakat co-hosted the renowned Alternative Press Music Awards for two years in a row, in 2015 and 2016. Alex began his musical career in 2002 when he was 15 years old when he joined a band named Crew Fighters. With the band All Time Low, he reached new heights in his career. All Time Low has released seven studio albums so far, the most recent of which was released on June 2, 2017. He and his band members put a lot of effort into each song and album, which shows in their popularity and success. They are now one of the most well-known punk-pop bands in the world.

The Career of Alex

The band began performing Green Day and Blink-182 cover tunes. All Time Low was later completed by the addition of Zack Merrick and Rian Dawson.

Alex and his buddies got their first record deal with Emerald Moon Records in 2004, and their debut extended play album, ‘The Three Words to Remember in Dealing with the End,’ was published. ‘The Party Scene,’ their debut studio album, was released the following year.

The band’s prosperity continued. They joined Hopeless Records in 2006, and their platinum hit, “Dear Maria, Count Me In,” was released in 2007. They released their second studio album, ‘So Wrong, It’s Right,’ the same year.

The band’s prosperity continued. They joined Hopeless Records in 2006, and their platinum hit, “Dear Maria, Count Me In,” was released in 2007. They released their second studio album, ‘So Wrong, It’s Right,’ the same year.

‘Future Hearts,’ All Time Low’s sixth studio album, was released on Hopeless Records on April 7, 2015, and debuted at number one on the UK album charts.

Alex and Jack released the debut episode of their podcast, ‘Full Frontal,’ on April 29, 2015. It’s about music, pop culture, television, and films. ‘Full Frontal’ rose to the top of the iTunes Podcast Charts to become the number one music podcast.

‘Straight to DVD 2: Past Present and Future Hearts,’ a sequel to ‘Straight to DVD,’ was released in 2016. It covered the band’s last four years. The band departed Hopeless Records in 2017 and teamed up with Fueled by Ramen, releasing a new song called “Dirty Laundry.”

Alex has also written songs for McBusted, 5 Seconds of Summer, and Simple Plan, among others. Alex utilized a range of Paul Reed Smith guitars, mainly Mira, until mid-2013.

However, due to several issues, he now prefers Fender guitars, particularly the Telecaster Deluxe variants. He also plays electric guitars made by Starcaster and Gibson.

‘Last Young Renegade,’ the band’s most recent album, was released on June 2, 2017, alongside Fueled by Ramen. The band released some limited edition jackets based on the styles they wear in the music videos to commemorate the release of their seventh studio album and to promote the new record.

Isobel Gaskarth and Peter Gaskarth gave birth to Alexander William Gaskarth on December 14, 1987, in Essex, England. Tom was his half-brother, and he had two half-sisters. When Alex was six or seven years old, his family relocated to Baltimore, Maryland, in the United States.

He was taken out of his private school and placed in a public school while he was in middle school, where he met Jack Barakat, who became his best buddy. They became acquainted with Rian Dawson and Zack Merrick when they started high school.

Alex’s 21-year-old brother Tom died of alcohol intoxication when he was 12 years old. Alex adored his brother and had a rose tattooed on his left hand in his honor.

‘Rest in peace Tom’ was also a line he used in one of his band’s music videos, which was published in May 2017. He wrote the songs ‘Lullabies’ and ‘Therapy’ on All Time Low’s album ‘Nothing Personal’ in honor of his brother.

On April 9, 2016, Alex married his longtime fiancée Lisa Ruocco, a Union3 Event Productions event director, in Baltimore. He had been dating Lisa since high school, and they had been married for 12 years at the time.

Sebastian (Baz) and Peyton are his two dogs. ‘Dear Maria, Count Me In’ is his favorite song.

He enjoys fantasy novels, comic books, and video games, with ‘The Fifth Element’ being his favorite film. He’s a Pokemon fanatic who can name all 150 of them! Brownies are his go-to junk snack.

Alex Gaskarth is an English musician with a $1 million net worth.