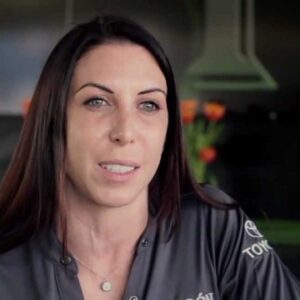 Alexis DeJoria is an American drag racer who competes in the National Hot Rod Association’s competitions with funny cars (NHRA). She is the daughter of John Paul DeJoria, a haircare and alcohol magnate. She started working for her family’s company right out of college, demonstrating her entrepreneurial spirit even as a child. She worked in every department imaginable for the following four years, from public relations to research and development to art. However, she has always had a strong desire to race cars, which she realized in 2005 when she began participating in the NHRA Super Gas category. After that, she drove a rear-engine Super Comp dragster, then a Top Alcohol Funny Car (TAFC), and ultimately a Funny Car in 2011. Her father’s tequila brand Patrón Spirits Company is her main sponsor, and she is a member of the famed Kalitta Motorsports squad. She’s become one of the top ten drivers in the NHRA Mello Yello Drag Racing Series, driving a 10,000-horsepower Toyota Camry Funny Car.

Alexis DeJoria was 16 years old when she was introduced to competitive racing by a friend at the famous Pomona drag strip in California. It was love at first sight for both of them. She began taking training and quickly progressed through the non-professional sportsman classifications of the NHRA. In 2005, she debuted on the professional NHRA circuit, driving a Super Gas car at first before moving to a rear-engine Super Comp dragster.

She was a huge hit right away. She had advanced to the final rounds of two contests and won one of them, the Sportsman Nationals in Fontana, California, just eight months after first stepping onto the racetrack.
Her success had made her brash and ambitious, and she had a constant yearning to race in faster and louder cars. She switched to the Top Alcohol Funny Car (TAFC) category and competed primarily on the west coast for the next two years as part of a two-car squad.

She started her own team, Stealth Motorsports, in 2009, which marked a key turning point in her career. For three years, she was their co-owner, CEO, and star racer, reaching the finals of four national events, winning a divisional event, and winning her first NHRA national event in the TAFC category. DeJoria is only the second woman in history to receive the honor.

She trained for a year before competing in the Funny Cars category at the 2011 Texas Fall Nationals. She joined Kalitta Motorsports, a Michigan-based squad led by legendary drag racer Connie “The Bounty Hunter” Kalitta, after leaving Stealth. In her maiden season as a funny car driver, she astonished the crowd by making it to the final round of the NHRA Thunder Valley Nationals in Bristol, Tennessee. At Reading, she also set a new personal best for time with a run of 4.032 seconds and a speed of 319.07 mph.

She made four last round appearances the following year. But it wasn’t until 2014 that she realized she was born to be a driver. With a 3.997-second ET at Pomona, she made history as the first woman to run a sub-four-second time. She won her maiden race in the humorous category at the following race in Phoenix, and she repeated the feat in Las Vegas in March. She set a new track record at Atlanta Dragway in May, finishing the run with a 4. 012 second ET while qualifying first.

She then went on to set a new Funny Car track record of 3.998 seconds at the Brainerd International Raceway, shattering her own record of 4.010 seconds. In September, she achieved the pinnacle of her career. She won the U.S. Nationals in Indianapolis, dubbed “the Superbowl of Drag Racing.” With another no. 1 qualifier and the first participation on the Countdown to the Championship, the 2014 season came to a close on a strong note.

She competed at the 2015 Nitro Funny Car Summernationals in Englishtown, New Jersey, and made it to the finals. She entered the Countdown to the Championship playoffs for the second time in September. She finished the year in ninth place after multiple times breaking her own ET and speed records. Her 2016 season was yet another triumph in her professional career. She made history by becoming the first woman to compete in 100 Funny Cars competitions. She won her fourth Funny Cars event later that year and finished in the top ten three times in a row.

In her 12-year professional career, she has been in two catastrophic incidents. Her parachutes tore off the rear end of the car, spilling oil all over her brakes, while she was racing alcohol funny cars during a drag racing event in Englishtown in 2009. At 130 mph, she slammed into the sand trap, passing through two safety nets before coming to a halt in the fourth row of sand-filled plastic barrels. Fortunately, she was able to walk away from the incident with very minor injuries.

On July 31, 2016, she had a bad day in Sonoma. Her Camry smashed into the left retaining wall during a racing against John Force. She was brought to the Queen of the Valley Medical Center in Napa, where she was diagnosed with a high-energy left pelvic fracture. She did not, however, require surgery and was discharged the following day.

In September 2012, Alexis DeJoria became engaged to Jesse James, a television personality and motorcycle customizer. They married on March 24, 2013, almost six months later, in a lavish and expensive wedding. Isabella (born 2003) is her daughter from a previous relationship.