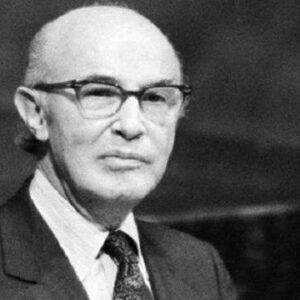 Alfonso Garca Robles was a Mexican diplomat who was a driving factor behind the Treaty of Tlatelolco, for which he received the Nobel Peace Prize with Alva Myrdal of Sweden in 1982. He earned his legal degree from the National Autonomous University of Mexico (UNAM), the Institute of Higher International Studies in Paris, France, and the Academy of International Law in The Hague. He ultimately joined Mexico’s Foreign Service and served as a representative to the 1945 San Francisco Conference, which established the United Nations (UN). He then spent several years in the United Nations Secretariat. He held various high-profile diplomatic positions over his long and brilliant career, including Ambassador to Brazil and State Secretary in the Ministry of Foreign Affairs. He served as director general of the Mexican Ministry of Foreign Affairs in the late 1950s, where he was a key figure at the Law of the Sea conferences. He was appointed foreign minister after serving as his country’s representative to the United Nations for a few years. He eventually became Mexico’s Permanent Representative to the United Nations’ Committee on Disarmament, which is based in Geneva.

Alfonso Garca Robles was born on March 20, 1911, into a mercantile family in Zamora, Michoacán, Mexico. In Guadalajara, he completed his secondary school.

His first professional ambition was to become a priest. His views changed over time, and he went to college in Mexico City, earning a bachelor of law degree from the National University.

He became interested in international law and decided to study in the Netherlands. In 1938, he got a diploma from the Hague Academy of International Law.

He was assigned to the Mexican Embassy in Sweden for two years after finishing his studies. He was appointed Deputy Director of Political Affairs of the Foreign Service by the Mexican Foreign Ministry in 1941.

He was a member of Mexico’s delegation to the San Francisco Conference in 1945. He took part in a number of international meetings that led to the establishment of the United Nations. He joined the United Nations Secretariat the following year.

During this time, he focused on multilateral topics such as the United Nations’ work on disarmament. He was appointed as the head of the mission to the Committee on Disarmament, a pivotal moment in his career.

He was an outspoken supporter of the UN’s efforts to promote global disarmament. He was widely praised for his participation in the special UN disarmament session, where he represented Mexico during the Geneva negotiations. At the first special session in 1978, he was one of the members tasked with organizing the diverse opinions and recommendations in a joint text. The Assembly’s final document was successfully adopted during that session.

‘The Pan-Americanism and the Policy of Good Neighbourliness’ (1938), ‘Of the Atlantic Charter Conference in San Francisco’ (2 vols. 1949), ‘The Denuclearization of Latin America’ (1967), ‘El Tratado de Tlatelolco’ (1967), and ‘The General Assembly on Disarmament’ (1967) were among his many works on diplomatic and geopolitical issues (1979).

He pushed for the Tlatelolco Treaty, which established a nuclear-free zone in Latin America and the Caribbean. It was a treaty signed by 22 Latin American countries that prohibited the use of nuclear weapons in that region. His relentless efforts toward global nuclear disarmament earned him a lot of respect.

In 1982, Alfonso Garca Robles and Alva Myrdal were jointly awarded the Nobel Peace Prize for their contributions to the Treaty of Tlateloco.

He met and fell in love with a Peruvian lady, Juana Mara Szyszlo, a UN official, while in New York. In 1950, the couple married and had two children.

The Fulbright-Garca Robles fellowship, named after Garca Robles and US Senator J. William Fulbright, was founded in 1990 to aid both Mexican and American residents.

He passed away on September 2, 1991, from kidney failure. He was in his eighties.

The estimated net worth of Alfonso García Robles is unknown.