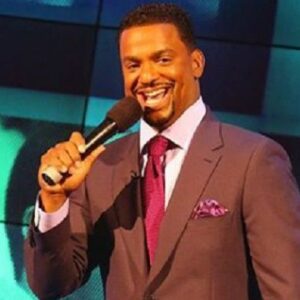 American actor, host, dancer, and television director Alfonso Lincoln Ribeiro Sr. is best known for playing Alfonso Spears in the 1982 television sitcom “Silver Spoons.” He attracted the attention of the iconic artist Michael Jackson while playing the lead in the Broadway production of “The Tap Dance Kid” in 1983. This facilitated Ribeiro’s appearance as a dancer in a 1984 Michael Jackson Pepsi commercial. When NBC cast him as Carlton Banks in the comedy “The Fresh Prince of Bel-Air,” he received the biggest break of his career. His dancing move to the song “It’s Not Unusual” during his appearance alongside Will Smith in the sitcom became known as “The Carlton Move” and has since come to represent him in a certain way. He replaced Tom Bergeron as the host of ABC’s “America’s Funniest Videos.” He won “Celebrity Duets” on the FOX Channel in 2006. Along with his dance partner Witney Carson, Ribeiro won the 19th season of “Dancing with the Stars” in 2014. He enjoys playing golf and racing cars, and he has won many races and golf tournaments to his name.

Michael and Joy Ribeiro welcomed Alfonso Ribeiro into the world on September 21, 1971 in The Bronx, New York, USA. His parents are both from Africa. He attended California State University, Los Angeles, and graduated from it.
When he made his television debut on the PBS program “Oye Ollie” at the age of eight, Ribeiro made his entrance into the entertainment business. He first performed a prominent role in the Broadway blockbuster musical “The Tap Dance Kid” in 1983.
At the age of 10, he tried his hand at music, recording singles like “Dance Baby” and others.

With ‘The Fresh Prince of Bel-Air’ in 1990, Ribeiro continued his stellar streak after making his television debut with ‘Silver Spoons’ in 1982. He remained on the show until 1996.
He started working as a voice actor for “Spider-Man” in 1994, providing background vocals for the characters Randy Robertson and Robbie Robertson.

In 1996, he appeared as Dr. Maxwell Stanton in the television series “In The House,” which was his next lucrative endeavor. He participated in the six seasons of the program up until 1999.
He split his time between hosting TV shows and acting in a few made-for-television movies in the late 1990s. He also performs tap dancing professionally.

In 2008, he started presenting “Catch 21,” the acclaimed card game show on television, as well as “GSN Live” on the Game Show Network. In 2013, he made his subsequent debut as the host of an ABC Family game show, “Spell-Mageddon.”
He took part in “I’m a Celebrity” in 2014, a British reality show.
He was removed after 19 days and finished eighth on the television show Get Me Out of Here!

He released a few singles early in his career, including “Dance Baby,” “Not Too Young (To Fall In Love”),” “Sneak Away With Me,” and “Time Bomb.”
Ribeiro also directed TV programs for UPN while working behind the camera. He directed the television programs “One on One” in 2001, “All of Us” and “Eve” in 2003, and “Cuts” in 2005. Two episodes of the 2015 television series “K.C. Undercover” and “Young & Hungry” were directed by him most recently.
He currently hosts the Cooking Channel programs “Unwrapped 2.0” and “America’s Funniest Home Videos” on ABC.

In 2002, Alfonso Ribeiro wed Robin Stapler, and the two had a daughter, Sienna Ribeiro. The couple divorced in 2006, although custody of their daughter was split between Ribeiro and Stapler.
In 2012, he wed Angela Unkrich, with whom he has two boys. Anders Reyn Ribeiro was born in 2015, while Alfonso Lincoln Ribeiro Jr., also known as AJ, was born in 2013.
In Los Angeles, Ribeiro resides with his wife and sons. He actively takes part in a number of celebrity automobile races because he enjoys racing cars.

An American actor, director, dancer, and TV personality with a $4 million fortune is Alfonso Ribeiro. His most well-known role is arguably that of Carlton Banks in the hit TV show “The Fresh Prince of Bel-Air.” He has been “America’s Funniest Home Videoshost “‘s since 2015.

On VH1’s 2005 edition of “The Greatest: 100 Greatest Kid Stars,” Ribeiro came in at position 95.
The Toyota Grand Prix of Long Beach celebrity race was won by Alfonso Ribeiro twice in 1994 and 1995.
In the 1984 Pepsi ad, Ribeiro expertly executed the Michael Jackson dance movements with the celebrity.
During the second half of the 1990s, he raced in the Star Mazda Series on a part-time basis. His best finish was third at the Las Vegas Motor Speedway.