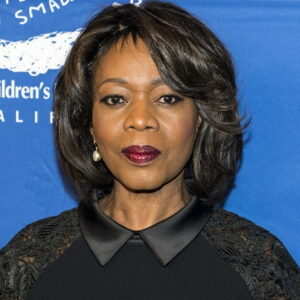 Alfre Woodard, an American actress, producer, and political activist, is regarded as one of the most adaptable and dynamic performers of all time in the movie business. Over the course of her 50-year career, Alfre has appeared in a wide range of stage productions, feature films, television movies, and series. For each of these roles, she has won numerous honors and received nominations. Woodard has received 18 Emmy Award nominations, one each for the Grammy and Academy Awards. She has garnered three Screen Actors Guild Awards, one Golden Globe, and four Emmys. Because she can add gravitas to whatever scene or plot she performs, Woodard frequently appears in politically sensitive productions. Her breakout performance appeared in the 1983 drama movie “Cross Creek,” for which she was nominated for an Academy Award. Woodard’s television acting career has been as as successful as her illustrious cinema career, with her most well-known TV role to date being Dr. Roxanne Turner in the NBC medical drama series “St. Elsewhere.” Political activist and champion of civil rights, Woodard. She is a co-founder of “Artists for a New South Africa,” an organization that promotes women’s rights and equality in the nation. AMPAS, popularly known as the Academy of Motion Picture Arts and Sciences, has Woodard on its board of governors.

Marion H. Woodard, an entrepreneur, and part-time interior designer, and Constance Woodard, a housewife, welcomed Alfre Woodard into the world on November 8, 1952, in Tulsa, Oklahoma. Her two older siblings are male.
She was a cheerleader at Bishop Kelley High School in Tulsa, Oklahoma, a private Catholic institution where she received her diploma in 1970. She continued her education at Boston University, where she received a bachelor’s degree in theater and fine arts.

She started perfecting her acting techniques at the Mark Taper Forum before making her professional theater debut in 1974 on the Arena Stage in Washington, D.C. She relocated to Los Angeles, California, in 1976.
In the off-Broadway play “For Colored Girls Who Have Considered Suicide When the Rainbow is Enough,” she made her acting debut in 1977. This was her breakout performance.

Alfre Woodard made her acting debut in Alan Rudolph’s 1978 film “Remember My Name.” During the same year, she also played the lead opposite Samuel L. Jackson in the television film “The Trial of the Moke.”
She was cast in the ensemble comedy film “Health,” directed by Robert Altman, in 1980. Woodard made an appearance in the 1981 NBC television miniseries “The Sophisticated Gents.”

She co-starred with Tim Matheson and Catherine Hicks in the comedy-drama “Tucker’s Witch” from 1982 to 1983 as a series regular.
She co-starred in the 1985 sitcom “Sara” with Geena Davis, but the show was canceled after only a few episodes.
She and Farrah Fawcett co-starred in the drama movie “Extremities” from 1986, which is based on William Mastrosimone’s 1982 play of the same name.

She co-starred with Mary McDonnell in the drama movie “Passion Fish” in 1992, which served as her breakthrough performance. Woodard, who portrayed nurse “Chantelle,” won praise from the critics for her outstanding work.
She co-starred with Robert Downey Jr. in the comedy-fantasy movie “Heart and Souls” in 1992. For her work in the movie, Woodard received a nomination for a Saturn Award for “Best Supporting Actress.”

She starred opposite Danny Glover in the drama movie “Bopha!” in 1993. She also had a major role in Spike Lee’s 1994 film Brooklyn, which was well-received by reviewers.
She appeared in the 1995 drama film “How to Make an American Quilt” with Ellen Burstyn, Kate Nelligan, Anne Bancroft, Winona Ryder, and Maya Angelou.

She appeared in the 1996 film “Primal Fear” with Richard Gere and Edward Norton. She portrayed Lily Sloane, Zefram Cochrane’s assistant, in the science fiction film “Star Trek: First Contact” that same year.
She portrayed the principal characters in the HBO-produced “Miss Evers’ Boys” and the film adaptation of Carson McCullers’ novel “The Member of the Wedding” in 1997.

In the independent drama film “Down in the Delta,” which Maya Angelou directed, Woodard starred as an alcoholic single mother from Chicago who is compelled to spend the summer in Mississippi with her uncle.
She starred in Lawrence Kasdan’s comedy-drama film “Mumford” in 1999. She appeared in the film with Mary McDonnell, who played her co-star in “Passion Fish.”

In 2000, Woodard was nominated for a Golden Globe for her portrayal of a drug addict in the film “Holiday Heart.” She also provided the lemur voice for the character of “Pino” in the same year’s Walt Disney animated feature “Dinosaur.”

She appeared as a guest star in two episodes of the television show “The Practise” in 2003. For her performance, she received her fourth Primetime Emmy Award.
In the comedy-drama series “Desperate Housewives,” which was produced by ABC, Woodard portrayed Betty White in 2005. She attracted a lot of media attention thanks to her performance.

She starred in Tyler Perry’s drama movie “The Family That Preys” in 2008. Her work in the film received tremendous praise.
In 2009, Woodard starred in the independent drama film “American Violet.” She portrayed the mother of an unjustly detained 24-year-old African-American woman involved in a drug bust.

She played Lt. Tanya Rice in the TNT comedy-drama series “Memphis Beat” from 2010 to 2011. For her work in the series, Woodard was honored with a Gracie Allen Award.
She was also chosen to play Ruby Jean Reynolds in the third season of HBO’s “True Blood,” a dark fantasy horror thriller.

In the 2012 remake of the 1989 comedy-drama film “Steel Magnolias,” she portrayed Ouiser.
In the historical drama “12 Years a Slave,” which came out in 2013, she portrayed Mistress Harriet Shaw.
On March 21, 2014, it was revealed that Woodard had been chosen to portray the first female president of the United States in the NBC political drama “State of Affairs.” But due to low viewing and ratings, the show was cut after just one season.

She appeared in the supporting role of Miriam Sharpe in the Marvel film “Captain America: Civil War” in 2016. Her second appearance in the Marvel Cinematic Universe was as Mariah Dillard in the Netflix series “Luke Cage.”
She played the title role in the independent drama movie “Juanita” in 2017. During the same year, she also appeared with Michelle Monaghan in the film “Saint Judy.”

She was chosen to portray the main character of a prison warden in the 2018 prison drama movie “Clemency.” In addition, Woodard is still starring as Renee in the Fox prime-time serial drama “Empire.”

She co-starred with Mary Steenburgen in Martin Ritt’s historical drama film “Cross Creek” in 1983, for which she was nominated for an Academy Award for “Best Supporting Actress.” She received her first Primetime Emmy Award that year for her portrayal of Doris Robson in the NBC drama series “Hill Street Blues.”

Because of her significant contributions to contemporary American cinema, Alfre Woodard was honored by being inducted into the Oklahoma Hall of Fame in November 2014.

American actress, producer, and activist Alfre Woodard has a $13 million dollar net worth. For her parts in movies like “Cross Creek,” “Grand Canyon,” “Heart and Souls,” “Passion Fish,” and “Clemency,” Alfre Woodard is well-known.