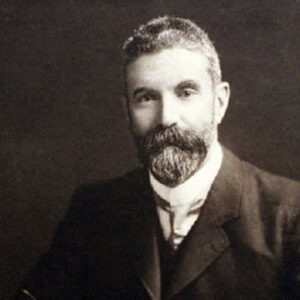 Alfred Deakin was Australia’s second Prime Minister and played a key role in the founding of the Commonwealth of Australia. He was born into a lower-middle-class household and acquired his education at several institutions. He did not, however, show any interest in studies until he met his teacher, John Edward Bromby. He excelled well in school and pursued further education in law under John’s mentorship, but this subject did not appeal to him. He earned a legal degree and was even admitted to the bar association. He was unable to excel in this field, therefore he went to work for a newspaper. His writing talents helped him keep the job, and his boss, David Syme, educated him on the protectionist policy and led Deakin into politics by supporting his election participation. Deakin was also a key figure in the federation movement, and he was instrumental in the formation of the Australian Federation. He began his political career as a Member of Parliament, and his ability to lead helped him advance up the political ladder. He also spent three times as Prime Minister of the Australian Federation, drafting and passing numerous programs and bills to safeguard the wellbeing of Australians.

He was born in Collingwood, Melbourne, on August 3, 1856, to William Deakin and Sarah Bill.
He attended a boarding school in Kyneton for his early education before enrolling at the ‘Melbourne Church of England Grammar School.’
He completed his matriculation in 1871, scoring well in areas like algebra, history, and Euclid, as well as passing English and Latin. He enrolled as a law student at the ‘University of Melbourne’ the following year.
He was not very interested in the subject of law, but he did enjoy reading and even scribbled his opinions. In 1875, a compilation of his writings called ‘Quentin Massys’ was released, which included a five-act blank verse drama.

He cruised through his graduation and earned a law degree in 1877, but he was unable to succeed in his job as a lawyer due to a lack of motivation.
He became interested in religion and published ‘A New Pilgrim’s Progress’ in 1877.
During the period 1878-1883, he met the Scottish-Australian newspaper publisher of ‘The Age,’ a leading daily, and was employed as a writer, which helped him earn a living.
He was also introduced to politics by Syme, and with the help of his mentor, he ran for office and won. He was elected to the Victorian Legislative Assembly, but had to leave soon after due to a disagreement over the electoral process. He ran in a couple more races before winning the General Election in 1880.
In 1883, he was named Commissioner of Public Works and Water Supply, and the following year, he was promoted to Solicitor-General and Minister of Public Works.
In 1885, he drafted the ‘Shops and Factories Act,’ which established working hours, examined working conditions, and included provisions to pay injured workers.
During this time, he was the chairman of the ‘Royal Commission on Water Supply,’ which finally led to the creation of the ‘Irrigation Act.’ He also wrote a number of books about irrigation, including ‘Irrigation in Italy and Egypt’ and ‘Irrigated India.’
He founded the ‘Liberal Party’ in 1886, but the decline of Victorian government forced him to return to his earlier career as a lawyer in order to make a living. Simultaneously, he maintained his literary reading and writing habits.
In 1893, he published ‘Temple and Tomb in India,’ a book that covers issues such as religion and architecture in India.

He joined the ‘Federation movement’ in the late 1890s, representing his state at the ‘Australasian Federal Conference,’ and taking part in the debate over the establishment of the Australian Constitution.
He was an expert in law and history, as well as a skilled negotiator, and he utilized these skills to persuade the British parliament to ratify the constitution.
The British Parliament approved the constitution in 1990, and Edmund Barton was elected as Australia’s first Prime Minister, while Alfred Deakin was elected as Australia’s first Attorney General and also became a Member of Parliament for the Ballarat Division.
In 1901, he was a key figure in the establishment of the ‘White Australia Policy,’ which barred non-Europeans from settling in Australia. He was a key figure in the formation of the High Court of Australia the following year.
In 1903, he took over as Prime Minister from Edmund Barton, but he resigned the next year.
Deakin was re-elected in 1905, and during his period in office, he actively served the Commonwealth by developing laws and policies concerning Commonwealth, Australian currency, trade protection, and many other issues.
In 1905, the ‘Copyright Act’ was passed, followed by the creation of the ‘Bureau of Census and Statistics’ and the ‘Bureau of Meteorology.’ The ‘Quarantine Act’ was also passed during his second term in government.
He also made a few revisions to the ‘Judiciary Act,’ resulting in the appointment of five judges to the ‘High Court.’ During his reign, the ‘Australian Industries Protection Act’ was also passed.
Until 1910, he served two more terms as Prime Minister in a row, and he remained involved in politics for the next three years.

In 1913, his erudite commander was forced to resign due to his failing mental state. He did, however, lead the ‘Royal Commission on Food Supply’ and served as president of the ‘Australian Commonwealth.’ These engagements exacerbated his health problems, and he sought comfort from his family and friends.

Major Projects
He devised a number of initiatives aimed at improving the well-being of his people. The ‘Shops and Factories Act,’ for example, mandated that employees had set working hours and had safe working conditions.

Deakin married Elizabeth Martha Anne Browne in 1882, and the pair had three daughters: Stella, Ivy, and Vera.
Many institutions bestowed accolades and honors on him as a result of his contributions to society, but he was too humble to receive them.
On the 7th of October, 1919, this amazing leader passed away, and his remains are interred in Victoria’s ‘St Kilda Cemetery.’
Many of his works, including as ‘The Crisis in Victorian Politics’ and ‘The Federal Story,’ were published after his death.

The estimated net worth of Alfred Deakin is unknown.

The ‘Australian Post’ issued a postage stamp with Alfred Deakin’s portrait on it in 1969.