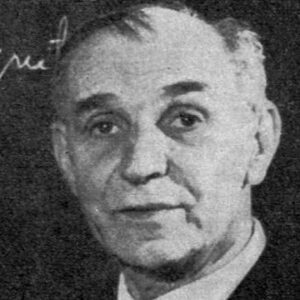 Alfred Kastler was a French physicist who won the 1966 Nobel Prize in Physics for discovering and developing optical techniques for studying Hertzian resonances in atoms. In collaboration with another French physicist, Jean Brossel, he conducted research on quantum mechanics, spectroscopy, and the interaction of atoms and light. He investigated the various radiations produced when radio waves and light are used to excite atoms. He then combined magnetic resonance and optical resonance to develop the technique of optical pumping, which involves stimulating atoms in a specific substance in such a way that they achieve higher states of energy. Due to the fact that the light energy used to stimulate the atoms is re-emitted, the optical pumping system evolved as a significant step forward in the development of laser and maser theory. His extensive research into atomic spectra aided in the establishment of the new field of nuclear magnetic resonance. He taught at the ‘Blaise Pascal University’, the ‘University of Bordeaux’, the ‘University of Louvain’, and the ‘École Normale Supérieure’. He remained the Director of Research at France’s ‘National Center for Scientific Research.’ He was involved in peace movements, advocated for the establishment of Israel, opposed the rapid development of nuclear weapons, and spoke out against America’s involvement in the Vietnam War. Among other distinctions and awards, he was made a Knight in 1952, a Commander of the French Legion of Honor in 1957, and a recipient of the Wilhelm Exner Medal in 1979.

He was born in Guebwiller, Alsace (then part of the German Empire, now in France) on May 3, 1902, to Fréderique Michel Kastler and his wife Anne Catherine Kastler.
He began his education in his hometown and later attended the Oberrealschule in Colmar, Alsace, which was renamed the ‘Lycee Bartholdi’ in 1918 following Alsace’s reversion to France following the ‘First World War’.

From an early age, his science and mathematics teachers instilled in him an interest in science. After reading Arnold Sommerfeld’s book on atomic structure and spectral lines, he was introduced to the principle of conservation of momentum, which is used to exchange energy between radiation and atoms, and which served as a foundation for the rest of his research career.

After completing his high school education in 1921, he enrolled at Paris’s ‘École Normale Supérieure,’ where he earned a BS in Physics in 1926.

He then pursued an academic career in higher education, joining Professor Pierre Daure’s ‘Bordeaux Faculty of Science’ as an assistant. He was a member of the staff from 1931 to 1936.

After completing his teaching responsibilities, he would devote his free time to conducting research. Professor Daure introduced him to experimental spectroscopy. Kastler spent years working in the field of optical spectroscopy, focusing on Raman spectroscopy and atomic fluorescence.

He remained a physics lecturer at the ‘Blaise Pascal University’ in Clermont-Ferrand from 1936 to 1938. He shifted his attention to the luminescence of sodium atoms in the upper atmosphere in 1937. He established that sodium vapour can absorb the twilight sky’s D line. He and his colleague Jean Bricard demonstrated that the D line is polarized when solar radiation is used to generate the emission.

He joined the ‘University of Bordeaux’ in 1938 and was appointed a university professor, a position he held until 1941.

After being advised by Georges Bruhat to return to the École Normale Supérieure’ in Paris, Kastler joined as a teacher of physics in 1941 and was promoted to professor of physics in 1945. In 1952, he was assigned a chair there. He remained at the school until 1968, training, guiding, and collaborating with a large number of students who went on to achieve great success in the field of optics.

French scientists remained isolated from the rest of the world during the German occupation, and it was not until 1945 that they were able to send students to other Western countries to acquire knowledge of recent scientific developments.

Kastler did the majority of his research at the ‘Ecole Normale Supérieure,’ where he and his student Jean Brossel formed a small spectroscopy research team following the war.

In 1951, the duo established the ‘Laboratoire de spectroscopie Hertzienne de l’ENS’ in the École Normale Supérieure’s Department of Physics. In their honor, the lab was renamed ‘Laboratoire Kastler-Brossel’ in 1994. The lab also has a second location on the Jussieu campus.

Kastler and Brossel collaborated and conducted research in areas such as spectroscopy, the study of the interaction of electromagnetic radiation with matter; quantum mechanics, a fundamental branch of physics concerned with methods involving photons and atoms; and the interaction of atoms and light.

Kastler and Brossel proposed the ‘dual resonance method,’ which employs both magnetic and optical resonance. Kastler then invented the technique of ‘optical pumping,’ in which atoms are excited in a specific substance to achieve higher energy states. As a result of the re-emission of the light energy used to excite the atoms, the optical pumping system developed into a significant procedure that aided in the advancement of the theory of lasers and masers.

The ‘Laboratoire Kastler-Brossel’ was instrumental in the development of atomic physics in the country and continues to be a leader in the field of fundamental physics of quantum systems.

Kastler was the Director of Research at France’s ‘National Center for Scientific Research’ from 1968 to 1972.

He remained President of the ‘Institut d’optique théorique et appliquée’s Board of Directors.

‘Action Against Hunger,’ a non-governmental organization founded in 1979 by a group of French physicians, writers, and scientists with the goal of eradicating world hunger, chose Kastler as its first Chairman.

In December 1924, he married Elise Cosset, a former student of the ‘École Normale Supérieure’. By trade, she was a secondary school history teacher.

They had three children: Daniel (born in 1926), who became a professor of physics at the Faculty of Science in Marseilles; Mireille (born in 1928), who is an ophthalmologist in Paris; and Claude-Yves (born in 1936), who is a Russian language instructor at Grenoble’s Arts Faculty.

The Estimated Net Worth of Alfred Kastler is unknown.