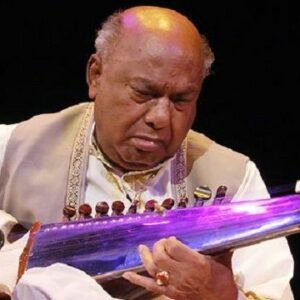 Ustad Ali Akbar Khan was a very famous sarod player. He was born into a family of musicians, and his father, who was a well-known percussionist of his time, taught him how to play. He started playing instruments when he was three years old, and by the time he was 13, his father thought he was good enough to play in public. Khan became a full-time music composer for All India Radio, Lucknow, after working as a court musician for one of the Maharajas of Rajasthan. Later, he worked in the Indian film industry by making music for famous directors like Satyajit Ray. Khan wanted to spend his life spreading the essence of traditional Indian music all over the world. That’s why he started the Ali Akbar College of Music in Calcutta, as well as in the United States and Switzerland. He is known for his epic jugalbandis (musical collaborations) with famous musicians like Ravi Shankar, Nikhil Banerjee, and violinist L. Subramaniam.

Ali Akbar Khan was born to Allaudin Khan and Madina Begum in Comilla, which is now in Bangladesh but was then called East Bengal. His father was a well-known musician and teacher, and when he was only three years old, he started teaching him.

Khan’s uncle, Fakir Aftabuddin, taught him how to play the drums. So he could learn a lot about music, his uncle made sure he knew how to sing and play different instruments well. In addition to his uncle, his father kept teaching him until he died in 1972.

Khan was taught by famous musicians like the sarod player Timir Baran and the flutist Pannalal Ghosh while he was learning. These musicians came to his father’s house to study with him. After a while, his sister Annapurna Devi joined him in his lessons.

Khan gave his first public performance in 1936 at a music conference in Allahabad. He had been learning music for years and had been taught by the best in the business. At the time, he was only 13 years old.

The next year, in 1938, Khan gave his first performance on All India Radio (AIR) in Bombay, Maharashtra. He was joined at the table by Alla Rakha. After a few years, it became normal for him to perform once a month on AIR. He was also appearing on AIR, Lucknow, more often.

In 1943, his father persuaded the Maharaja of Jodhpur, Hanwant Singh, to hire him as a court musician. There, he mostly taught other musicians how to play music and put on solo shows. Hanwant Singh was the one who gave him the name “Ustad.”

Ravi Shankar and Khan both left Maihar in 1944 to start working as professional musicians. Shankar moved to Bombay, while Khan became the youngest Music Director for AIR in Lucknow. He used to play by himself and write music for the radio ensemble.

He started making his series of 78 rpm records at the HMV Studios in Bombay in 1945. He wrote a new piece of music called Raga Chandranandan for one of these records. This record was a huge hit in India, and it was also heard all over the world.

Khan began the Ali Akbar College of Music in 1956 in Calcutta. The only reason he did that was to teach and spread Indian classical music and keep it from drying out as time went on and new age music came along.

He also started a school with the same name in Berkeley, California, in 1967. It moved to San Rafael, California, a few years later. Around this time, he played with Shankar Ghosh in Boston as part of the Peabody Mason Concert series. A few decades later, he started another Ali Akbar College of Music in Basel, Switzerland.

Khan played at the Concert for Bangladesh at Madison Square Garden in 1971. He was there with Ravi Shankar, Alla Rakha, and Kamala Chakravarty. George Harrison, Bob Dylan, Eric Clapton, and Ringo Starr were also there.

Khan got many awards for his great work in Indian classical music, such as the Padma Vibhushan, the MacArthur Fellowship, the National Heritage Fellowship, and so on. He was also nominated for two Grammys.

Khan was married three times and had a total of seven sons and four daughters with each of his wives.
Before he died, he had lived in the United States for almost 40 years. In 2009, he died in San Anselmo, California, of kidney failure.

Khan wrote the music for the title song “Har Kahin Pe Shaadmani,” which was sung by Lata Mangeshkar. Out of respect for Khan, she sang it for free.

Many well-known musicians, like Ravi Shankar, Nikhil Banerjee, and violinist L. Subramaniam, played with him in jugalbandis.