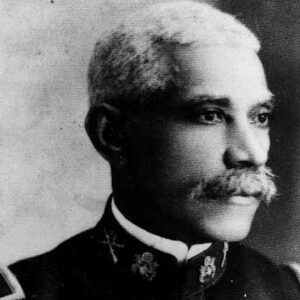 Allen Allensworth was the first African-American to earn the rank of lieutenant colonel in the United States Army. He was also a Baptist minister and educator. He founded the town of Allensworth in California, which was the state’s only wholly African-American-governed municipality. He was a devout Christian who founded multiple churches. Allen’s future appeared gloomy when he was born into slavery and sold several times to different masters. But life had other plans for the strong, hardworking, and courageous young man—he would one day have a significant impact on American history. He had the wonderful pleasure of meeting compassionate white folks while he was a kid slave who taught him to read, inspiring him to become an educator later in life. He fled enslavement and enlisted in the Navy; after a few years, he transferred to the army, where he was a great success. He had seen more than his fair share of racial persecution as a freed slave and a black American, and he was resolved to establish a settlement exclusively for African-Americans, and thus the town of Allensworth was formed.

Allen Allensworth was born in Kentucky as the youngest of thirteen children to Phyllis and Levi Allensworth. Allen and his siblings became their property by default because his mother was a slave owned by A.P. and Bett Starbird.
Allen was entrusted to his mistress’s son Thomas by his mistress. Allen was taught to read and write by the mistress’s son, despite the fact that teaching a slave to read was unlawful at the time. When his mistress found out what her son was up to, she sent him to another couple.

Mrs. Talbot, Allen’s new mistress and a Quaker, was a compassionate woman who encouraged him to study and sent him to the slave Sunday school. When his prior mistress learned of this, she kidnapped Allen and whisked him away from Mrs. Talbot.

He was sold to a new owner in 1854. His new mistress was a ruthless woman who forbade him from studying. He was beaten up and mistreated horribly. Young Allen, on the other hand, became friends with a white orphan boy and the two aided each other.

He attempted to flee when he was 13 years old in 1855. He was, however, apprehended and punished. He was then sold to Fred Scruggs, who was delighted to learn that the kid could read and trained him as a jockey. Allen was forced to race his best horse by Fred.

Scruggs took Allen and the horses to Louisville for a race in 1861. Allen approached soldiers from the 44th Illinois Volunteer Infantry Regiment and expressed his intention to flee. The soldiers assisted him in disguising himself as one of them, and he marched out with them.

He enlisted in the Hospital Corps and spent some time as a civilian nurse aid. Dr. A. J. Gordon, one of the surgeons, invited him home and provided him with his own room. Allen was starting to appreciate the freedom he was experiencing.

In 1863, he enlisted in the United States Navy and received his first pay as a free man. It was a thrilling experience! He worked hard and was promoted to Captain’s steward and clerk after two years of service on the gunboats Queen City and Tawah. In 1868, he returned to Kentucky to join his brother William. To make a living, the two men ran eateries, which they later sold for a profit.

Allen chose to continue his schooling now that he was free and had some money. The American Missionary Association had founded the Ely Normal School, and he enrolled there. He also used to teach at a school for emancipated slaves’ children.

He became connected with the Baptist Church during this time and was ordained as a pastor in 1871. During that decade, he studied theology in Tennessee and also preached there. In 1875, he began working as a teacher in Kentucky while also serving as the financial agent for the Kentucky General Association of Colored Baptists.
He was invited back to Louisville and was appointed to the Harney Street Baptist Church as pastor. He renamed the church Centennial Baptist Church after reorganizing it and attracting many new members.

In Philadelphia, he studied public speaking and gave public speeches across the country. The American Baptist Publication Society selected him as a Sunday School Missionary for the state of Kentucky. He was a firm believer in the value of education and worked tirelessly to establish Sunday Schools in his congregations.

He had already established himself as a notable person through his academic achievements and public speaking, and he chose to enter politics. In 1880 and 1884, he was elected as Kentucky’s only black delegate to the Republican National Conventions.

When he was 44 years old, he was appointed as a chaplain in the United States Army, making him one of the few black chaplains in the army. He went to the numerous locations he was posted to with his family. He produced ‘Outline of Course of Study, and the Rules Governing Post Schools of Ft. Bayard, N.M.’ while stationed at Fort Bayard, which was eventually used by the army as a guidebook for the education of enlisted troops.

He retired as a Lieutenant Colonel in 1906, making him the first African-American to hold that position.
Following his retirement, he had the notion of establishing an exclusive community for African-Americans where they could live free of the racial persecution that was so widespread at the time.

He founded the Allensworth neighborhood in 1908, where black people built homes and schools, erected a church, formed a band and orchestra, and joined the county school district. The settlement soon expanded to the point where it became a town.

Allensworth, an escaped slave who carved out a decent life for himself, intended to establish a colony exclusively for African-Americans, and thus the town of Allensworth was founded. It was a self-sufficient society where everyone helped to construct the community and where no one was discriminated against because of their race.

In 1877, he married Josephine Leavell, whom he had met while attending Roger Williams University. His wife was a teacher and a musician. The couple have two children together.
He died in a motorcycling accident in 1914 at the age of 72.

The estimated net worth of Allen Allensworth is not available