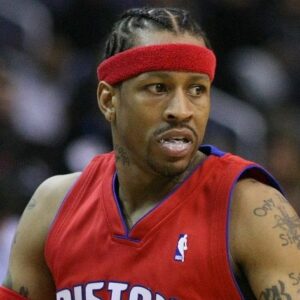 Allen Ezail Iverson is a retired basketball player from the United States. Allen Iverson, often known as ‘AI’ and ‘the Answer,’ is considered by ESPN to be the ‘fifth greatest NBA shooting guard of all time.’ He had a terrible childhood, being raised by his single mother and growing up in poverty. He excelled in athletics in high school, capturing the Division AAA Virginia state championship in both basketball and football. Iverson got a scholarship at ‘Georgetown University,’ where he excelled in basketball and won multiple prizes, after his mother encouraged him to play. Following his performance at the collegiate level, he was drafted into the NBA by the ‘Philadelphia 76ers.’ After a decade with the ‘Philadelphia 76ers,’ he went on to play for the ‘Denver Nuggets,’ ‘Detroit Pistons,’ ‘Memphis Grizzlies,’ and ‘Beşiktaş.’ He also competed in the ‘Summer Olympics’ and the ‘World University Games,’ representing the United States of America. Despite his enormous success and acclaim, Iverson has remained tremendously humble and committed to his family, according to his friends and coworkers. Allen was involved in a fight at the ‘Circle Lanes’ bowling alley in Hampton, Virginia, before beginning his professional career, for which he was arrested.

Allen Ezail Iverson was born in Hampton, Virginia, parents Allen Broughton and Ann Iverson on June 7, 1975. His mother was just 15 years old when he was born, and because his father had abandoned his mother, he was given his mother’s maiden name.
He attended ‘Bethel High School,’ in Hampton, Virginia, USA. He was a member of his high school’s football and basketball teams. He led both teams to the Virginia state championships in his junior year.
He completed his high school education at ‘Richard Milburn High School,’ a school for at-risk kids, while serving a sentence in a correctional facility for the bowling riots case in 1993.
Coach John Thompson of the ‘Georgetown Hoyas’ basketball team recognized him at ‘Richard Milburn High School,’ and offered him a scholarship to play for the ‘Georgetown Hoyas.’
He excelled in basketball at ‘Georgetown University,’ winning numerous major accolades including the ‘Big East Defensive Player of the Year’ and the ‘Big East Rookie of the Year.’

He led the United States of America squad to a 141-81 victory over the host country, Japan, in the 1995 ‘USA World University Games.’ That year, the squad won the gold medal. The ‘Philadelphia 76ers,’ a basketball team headquartered in Philadelphia, Pennsylvania, selected him in the NBA draft in 1996 after he had played two seasons for ‘Georgetown University.’ He led the league in scoring with 26.8 points per game in 1998-99, earning his first scoring title. This provided him the opportunity to play in the NBA playoffs and be a member of his first All-NBA squad. He signed a six-year, $70 million contract deal before the 1999-2000 season. He averaged 26.2 points, 4.8 assists, 4 rebounds, and 1.3 steals a game for the Philadelphia 76ers, who qualified for the playoffs. He had numerous conflicts with Coach Larry Brown during the off-season in 2000, and the franchise attempted to move him to the ‘Detroit Pistons.’ However, one of the players involved in the deal, Matt Geiger, failed to forgo his $5 million trade kicker.
During the 2000-01 season, he led his side to ten victories. He scored 31.1 points per game on his way to his second NBA scoring crown. The ‘Philadelphia 76ers’ advanced to the finals after defeating the ‘Indiana Pacers’ in the first round of the playoffs.
The ‘Philadelphia 76ers’ had a poor season in 2001-2002, as they barely made the playoffs before losing in the first round to the ‘Boston Celtics.’ He averaged 27.6 points per game in the 2002-2003 season, helping the ‘Philadelphia 76ers’ beat the ‘New Orleans Hornets’ in the first round of the playoffs. However, his squad was eliminated in the second round by the ‘Detroit Pistons.’ He competed for Team USA in the FIBA Americas Olympic Qualifying Tournament in Puerto Rico in 2003. The team won the gold medal with a score of 10-0. Coach Larry Brown resigned in 2003, and Randy Ayers was named the new coach of the ‘Philadelphia 76ers.’ Ayer was fired after failing to connect with his players.
Allen had a lot of problems with interim head coach Chris Ford during the latter months of the 2003-04 NBA season. He was even suspended for failing to show up for practice. The ‘Sixers’ missed the playoffs because Allen did not play in 34 games.
Along with Tim Duncan and Stephon Marbury, he captained the US Olympic Team roster in 2004. The squad took part in the 2004 ‘Athens Olympics,’ winning bronze.
Under the direction of new coach Jim O’Brien, the ‘Philadelphia 76ers’ returned to form in the 2004-05 season. Andre Iguodala and All-Star forward Chris Webber were also added to the roster.
He won his fourth NBA scoring title in the 2004-05 season, averaging 31 points and eight assists per game. The squad, however, was defeated in the first round by the ‘Detroit Pistons,’ who were now led by Larry Brown.
Coach Jim O’Brien was fired after one season owing to issues with the players. Iverson was pleased with the appointment of Maurice Cheeks as the new coach.
He averaged 33.0 points per game in the 2005-2006 season. His squad, on the other hand, missed the playoffs for the second time in three years. He had a rough start to the 2006-2007 season, and it was reported that he sought a trade. That season, he was not allowed to play any more games. He was dealt to the ‘Denver Nuggets’ on December 19, 2006. He had 22 points and 10 assists in his first game with the squad. The ‘Nuggets’ were defeated by the ‘Sacramento Kings’ in that game. The ‘Denver Nuggets’ traded him to the ‘Detroit Pistons’ on November 3, 2008. He altered his jersey number from three to one as a result of this.
Joe Dumars, the President of Basketball Operations for the Detroit Pistons, said on April 3, 2009 that Iverson would not play for the remainder of the 2008-2009 season. He signed a one-year contract with the ‘Memphis Grizzlies’ on September 10, 2009. He did, however, leave the team in November 2009 because he did not enjoy sitting on the bench.
He returned to the ‘Philadelphia 76ers’ in 2009 and was welcomed back into the squad. However, he quit the squad the following year, citing health concerns with his daughter as the primary cause. Later, it was revealed that he would not be returning to the team. He signed a deal with the Turkish professional basketball team ‘Beşiktaş Basketbol’ in October 2010. He made his debut for the squad in November of that year, scoring 15 points.
He announced his retirement on October 30, 2013, alongside his old Georgetown coach John Thompson and Sixers legend Julius Erving. Ice Cube, a rapper and actor, launched the ‘BIG3’ 3-on-3 basketball league in 2017. Iverson began his career in the league as a player-coach for the ‘3’s Company’ squad. He scored two points in nine minutes in his first game.

He was named NBA Rookie of the Year in 1997. He was named the NBA’s ‘Most Valuable Player’ in 2001. In the Class of 2016, Iverson was inducted into the Naismith Memorial Basketball Hall of Fame.

In 1993, he was involved in a brawl at Hampton, Virginia’s ‘Circle Lanes’ bowling establishment. He is accused of hitting a woman in the head with a chair. He was detained and held at the ‘Newport News City Farm,’ a penitentiary facility in Newport News, Virginia, for four months.
In 1995, Virginia Governor Douglas Wilder and the ‘Virginia Court of Appeals’ granted clemency and overturned the conviction due to insufficient evidence. He married Tawant to Turner, his childhood sweetheart, on August 3, 2001. They divorced in January 2013, but within a month, they reconciled. The couple is the parents of five children.
‘No Crossover: The Trial of Allen Iverson,’ a documentary film about the 1993 bowling riot and its aftermath, was released in 2010. The documentary, directed by Steve James, had actual video from the 1993 riots.

Allen Iverson has a net worth of $1 million.

During a game against his previous team, the ‘Philadelphia 76ers,’ this former basketball star was fined $25,000 for criticizing referee Steve Javie.