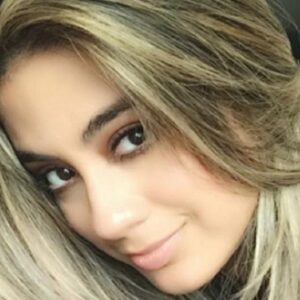 Ally Brooke is an American singer and the oldest member of ‘Fifth Harmony’, the most successful X Factor US girl group. Brooke has always enjoyed music and started performing in school. She originally auditioned for ‘The X Factor’ as a solo artist. After she was eliminated early in the competition, the judges trusted her ability and allowed her a second chance to compete in a group. Despite being thrown in a group, she and her bandmates Lauren Jauregui, Dinah Jane Hansen, Camila Cabello, and Normani Kordei swiftly earned everyone’s respect. She’s collaborated with Meghan Trainor, Kid Ink, Tyga, and Missy Elliott. The group has also been nominated for various accolades. According to a recent post from her parents, she may soon release her own solo song.

Allyson Brooke Hernandez was born on July 7, 1993, in San Antonio, Texas to Patricia Ann (Castillo) and Jerry Mesquite Hernandez. She is of Mexican origin and has a younger brother named Brandon.
She was interested in singing since she was a child. Growing up in Texas, she has been highly affected by the legendary singer, Selena, often known as the Queen of Tejano music.
She started singing as a singer when she was just nine years old. She performed at her high school, charity gatherings and sporting events.

With the objective of establishing herself as a singer, Ally Brooke auditioned for the second season of ‘The X Factor US’ in 2012 in Austin, Texas. She sang the song ‘On My Knees’ by pop singer Jaci Velasquez and garnered accolades from all four judges, with Simon Cowell hailing her to be a future superstar. Her calm yet controlled performance was afterwards lauded by ‘Huffington Post’.

After being ousted from the competition during bootcamp, she was welcomed back by the judges, along with four other girls, to form the group ‘Fifth Harmony’ on July 27, 2012. Apart from Brooke, the group consists singers Lauren Jauregui, Dinah Jane Hansen, Camila Cabello and Normani Kordei.
The ensemble passed the semifinals with “a finals-caliber performance” of Ellie Goulding’s ‘Anything Could Happen’, and made it into the top 3. However, they did not obtain enough public votes to move to the Top 2.

Despite not being finalists, Ally Brooke and her group wowed judges Simon Cowell and L.A. Reid. On January 17, 2013, Syco Music and Epic Records signed the group.
On YouTube, they began posting cover versions of songs by musicians like Ed Sheeran, Ariana Grande, and Mikky Ekko, earning accolades from the original artists. They covered Justin Timberlake’s Mirrors and Bruno Mars’ When I Was Your Man for Boyce Avenue’s Cover Collaborations, Volume 2 EP.

“Miss Movin’ On” was published as their first EP on October 22, 2013. The EP was a commercial success, reaching number 6 on the Billboard 200 and number 2 on the Billboard Top Latin Albums.
Fifth Harmony released their debut studio album, Reflection, on February 3, 2015, and toured in support of it. Meghan Trainor, Kid Ink, and Tyga were among the album’s guests. It reached #5 on the US Billboard 200 and #20 in the UK.

It was the highest charting single by an X Factor participant, reaching number 76 on the Billboard Hot 100. The song was also awarded gold by the RIAA.

‘Worth It’, the album’s final song, reached number 12 on the Billboard Hot 100 and was triple platinum by the RIAA. ‘Boss’ and ‘Sledgehammer’ also went platinum in the US.
7/27 was the group’s highest charting album, reaching #4 on the US Billboard 200. ‘Work from Home’, the album’s lead track, reached #4 on the Billboard Hot 100, becoming their highest charting US single. The RIAA awarded this album Gold.

Ally Brooke’s mother has severe scoliosis, a sideways curvature of the spine that limits movement. Before going on the talent competition, she used to look after her mother at home.
Her granddad died when she was on ‘The X Factor’. A few days later, she and her group dedicated ‘What Doesn’t Kill You (Stronger)’ by Kelly Clarkson to her grandfather.

She was briefly linked to another ‘X Factor’ contestant, Drew Chadwick. In 2012, she met YouTuber Troy Ogletree. Their three-year romance terminated in November 2015. Ally Brooke was born six weeks early, weighing 1 pound, 4 ounces. Despite her early birth, she screamed, leading her father to believe she was born to sing.
She is Fifth Harmony’s oldest and smallest member. So she’s called the ‘Little Big Sister’.

LYLAS was their original name (acronym for Love You Like A Sister). The name was altered to 1432 (I Love You Too) to prevent a clash with another group, and then to Fifth Harmony when the crowd voted.

Ally Brooke net worth: Ally Brooke is a $3 million American singer. Ally Brooke was born in July 1993 in San Antonio. She is best known as a member of Fifth Harmony. Brooke tried out for The X Factor Season 2.