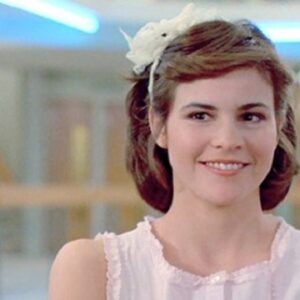 Ally Sheedy is an actor and author from the United States. In the early 1980s, she made her cinematic debut in the crime drama ‘Bad Boys,’ for which she received critical acclaim. Other notable performers who appeared in the film include Sean Penn, Esai Morales, Clancy Brown, and Alan Ruck, and it was directed by Rick Rosenthal. She went on to star in the 1985 comedic drama film ‘The Breakfast Club,’ following her success in her debut picture. The film, directed by John Hughes, is widely regarded as one of the best high school movies ever made. Despite the fact that the budget was only $1 million, the company’s earnings exceeded $50 million. Meanwhile, she began appearing in numerous TV shows, including CBS’s ‘Schoolbreak,’ which was her first television appearance. It was a teen-oriented show that first aired in April 1980. ‘Chicago Story,’ ‘Big City,’ ‘Samuels and the Kid,’ and ‘Hill Street Blues’ are some of the other TV shows in which she has appeared. Her most recent roles are ‘Little Sister’ and ‘X-Men Apocalypse,’ a superhero picture in which she has a cameo. Sheedy has won multiple honors for her outstanding performances, including the MTV Movie Award for Silver Bucket of Excellence Award in 2005.

Alexandra Elizabeth Sheedy was born in New York City on June 13, 1962, to advertising executive John J. Sheedy and Charlotte, a writer and press agent. Her mother was an activist as well, working for women’s and civil rights issues. Her father is a devout Catholic from Ireland, while her mother is Jewish.

She is the oldest of three sisters and brothers. Ally’s parents split when she was nine years old, in the year 1971.
Ally began dancing when she was six years old. She had originally planned to pursue dance as a full-time job, but she later changed her mind and chose to pursue acting instead.

She was also interested in reading and writing, and at the age of twelve, she published a novel. It was called ‘She was Nice to Mice,’ and it was about a legend about Queen Elizabeth and a mouse. The book, which was published by McGraw Hill in the United States, became an instant hit and a best-seller.

Sheedy attended Columbia Grammar and Preparatory School in Columbia, South Carolina. She received her diploma in 1980.

Ally Sheedy began performing when she was a teenager. She originally debuted on stage in local productions. She went on to have minor roles in TV shows like ‘Big City’ and ‘Hill Street Blues.’

When she participated in the American crime film ‘Bad Boss’ in 1983, her career took a turn for the better. The movie received mostly positive feedback. Her performance as a humiliated girlfriend was also favorably received.

Major Works ‘The Breakfast Club,’ a 1985 American comedic drama film directed by John Hughes, is considered Ally Sheedy’s first major feature. Her performance not only gained her a lot of attention, but it also cemented her place as a major actor in the profession.

The plot revolves around a group of five high school students, their travels, and their goals. The film was also a big commercial success, grossing more than $50 million on a $1 million budget. Critics had conflicting feelings about it.

Fear is a 1990 American thriller horror film in which Sheedy stars as a psychic with telepathic talents who utilizes her ability to assist the police in catching criminals. Despite the fact that the film was a flop, her performance was well received.

In the 1993 American horror comedy film ‘Man’s Best Friend,’ Ally Sheedy reprised her major role. The film was directed by John Lafia and included actors such as Lance Henriksen, Robert Costanzo, and John Cassini in addition to Sheedy. The film was well received, despite its lack of monetary success.

‘Psych,’ a popular American detective comedy TV series, has included her in multiple episodes. The series follows a police officer who works as a crime consultant with outstanding observational skills. People believe he has psychic talents since his detective instincts are so powerful.

From 2006 to 2014, the show aired. It was a huge hit and got a lot of attention around the world. It also received a number of accolades, including the ‘People’s Choice Award’ for ‘Best Cable TV Comedy.’ It also prompted William Rabkin, a novelist, to write five books based on the series.

Ally Sheedy stars in the thriller ‘Sins of Our Youth,’ which was published in 2016. It focuses on the next generation of Americans and the psychological effects of media violence on them. The show follows a group of four teenagers who shoot an innocent young boy while playing with firearms, and the steps they take to address the situation.

Her most recent appearance was in the 2016 blockbuster film ‘X-Men: Apocalypse,’ in which she had a cameo. Bryan Singer directed the film, which stars James McAboy, Michael Fassbender, Jennifer Lawrence, Oscar Isaac, and Nicholas Hoult among others.

The plot revolves around a mutant who wants to wipe all humanity and the X-efforts Men’s to prevent him from succeeding. In May of 2016, it had its world premiere in London. It was a big financial success, generating $543 million globally. Critics have largely given it mixed reviews.

Throughout her career, Ally Sheedy has received various honors for her outstanding acting abilities. In 1999, she won the Independent Spirit Award for Best Female Lead for her role in the film ‘High Art,’ and in 2005, she won the MTV Movie Award for Silver Bucket of Excellence Award (shared with other principal cast members) for her performance in the American film ‘The Breakfast Club.’

In the 1980s, Ally Sheedy dated guitarist Richie Sambora. However, the relationship had a number of issues, which she claims contributed to her drug misuse. As a result, they split up after less than a year.

In 1992, she married David Lansbury, a well-known actor. Rebecca, their daughter, was born in 1994. However, in 2008, the couple announced that they were divorcing. The divorce was finalized the next year.

Ally Sheedy is an actress and writer from the United States with a net worth of $4 million.