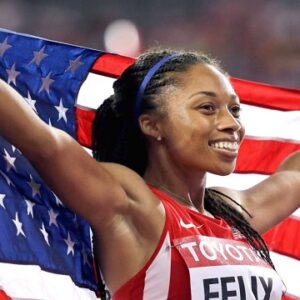 Allyson Felix is a six-time Olympic gold medallist in track and field from the United States. She is one of the most decorated female Olympians in track and field history, having won nine medals in all. She is a sprinter who specializes in the 100 m, 200 m, and 400 m. At the 2015 World Championships, she had the fastest sprint by an American woman in the 4 x 400 m relay. She has been interested in sports since she was a child, and while still in high school, she demonstrated outstanding speed on the track and strength in the gym. ‘Track and Field News’ named her the national girls’ “High School Athlete of the Year” in 2003. She elected to sacrifice her college eligibility after graduating from high school and instead accepted a professional deal with Adidas, which paid for her college tuition at the University of Southern California. She competed in her first Olympics at the age of 18 in the 2004 Summer Games in Athens, where she won a silver medal in the 200-meter dash. She had even more success at the 2012 Olympic Games in London, when she won three gold medals. Her success continued in the years after that, as she went on to win two more gold medals at the 2016 Olympic Games in Rio de Janeiro. Bob Kersee, a well-known coach, is her coach.

Allyson Michelle Felix was born in the state of California on November 18, 1985. Paul, her father, is an ordained preacher and professor of New Testament at The Master’s Seminary in Santa Clarita Valley, California, and Marlean, her mother, is a kindergarten teacher at Balboa Magnet Elementary. Wes Felix, Allyson’s older brother, is also a sprinter and currently serves as her manager. She considers herself to be a fervent Christian.
She discovered her athletic ability while attending Los Angeles Baptist High School in North Hills. She deadlifted at least 270 pounds while still in school with the help of her coach, Samson Young. She was also a standout performer in track and field. ‘Track and Field News’ named her the national girls’ “High School Athlete of the Year” in 2003.
She graduated in 2003 and elected not to attend college. Instead, she signed a professional contract with Adidas, which also covered her University of Southern California tuition. She eventually earned a bachelor’s degree in elementary education.

Allyson Felix competed in the 2004 Summer Olympics for the first time. She ran well enough to take silver in the 200 m behind Jamaica’s Veronica Campbell. With a time of 22.18, she set a World Junior record in the 200 m at the age of 18.
She won the 200 m gold medal at the World Championships in Helsinki in 2005, making her the youngest gold champion in the event’s history. She successfully defended her championship two years later in Osaka, defeating Veronica Campbell.
She qualified for the 2008 Olympic Games in the 200 meter dash but narrowly missed out in the 100 meter dash. She took silver in the 200 m in the Olympics, finishing barely behind Campbell, who won gold. Felix was also a member of the United States women’s squad that won the 4 x 400 m relay, earning him an Olympic gold medal.
She won the gold medal in the 200 m at the 2009 World Championships in Athletics, becoming the first woman to win three gold medals in the 200 m at the World Championships.
She began focusing on the 200 and 400 meters in 2010, and she competed in these two events, as well as the 4100 and 4400 meter relays, at the 2011 World Championships in Athletics. She won two relay golds for her team, but did not win an individual gold at the Championships.
At the 2012 Summer Olympics in London, Allyson Felix competed in the 100 m, 200 m, 4 100 m relay, and 4 400 m relay, winning gold medals in the 200 m, 4 100 m relay, and 4 400 m relay. She became became the second American woman to win three Olympic gold medals in athletics. Florence Griffith-Joyner was the first to do it at the 1988 Summer Olympics.
Felix competed in the 200 m at the 2013 World Championships in Moscow, but suffered a hamstring injury during the race. She had to be carried off the track due to the severity of her injury. She had to sit out of athletics for several months due to the injury before making a comeback in the 400 m at the Shanghai Diamond League competition in May 2014, where she finished fifth.
She worked hard over the next several months to rebuild her stamina and form, and she went on to win the 2014 IAAF Diamond League 200 meter title. She won gold in the 400 meters and silver in both the 4 100 meter and 4 400 meter relays at the 2015 World Athletics Championships.
Allyson Felix dominated the 2016 Rio Olympics, winning gold in the 4 x 100 m relay and the 4 x 400 m relay, as well as silver in the 400 m, bringing her total Olympic medals to nine — six golds and three silvers.

Despite her hectic schedule, she keeps in touch with her family, particularly her brother Wes.
Kenneth Ferguson, a fellow sprinter, has been in a long-term relationship with Allyson Felix.

Allyson Felix has a net worth of $4.5 million.