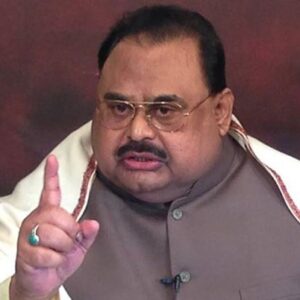 Altaf Hussain is a well-known Pakistani politician who currently resides in the United Kingdom. Hussain’s extended family was among the millions of Indian nationals who fled to the newly founded Pakistan, known as Muhajir. After completing his academic degrees and working as a trainee for a year, he entered politics, determined to fight for his fellow Muhajirs who felt betrayed and excluded from key government positions. Hussain became embroiled in the controversial and frequently violent political environment in his homeland after founding his own Muhajir political party, and hundreds of his fellow Muhajirs were killed in fights with government forces. Despite being forced to leave to the United Kingdom, he has maintained political power over his party and hometown in Pakistan. Despite being exiled for more than two decades, he continues to play a significant role in the politics of his homeland, giving televised speeches to enormous gatherings. He has been arrested several times as a result of significant criminal accusations and claims of ties to terrorism. Hussain remains a contentious figure in Pakistan, as the Muhajir community’s cherished hero and the avowed opponent of most of the ruling class fight to find their democratic footing.

Altaf Hussain was born in Karachi, Pakistan, on September 17, 1953. He has six brothers and four sisters. His family was originally from India, but they moved to Pakistan after the country gained independence from the United Kingdom in 1947. His father, Nazir Hussain, and mother, Khurseed Begum, are both Uttar Pradesh natives.
Before migrating to Pakistan, his father worked for Indian Railways. Mohammed Ramazan, Hussain’s paternal grandpa, was a prominent religious leader in Agra, India.

His family moved from Karachi to Azizabad in the late 1960s, when he attended the ‘Government Boys Secondary School.’ He received his diploma in 1969.

Hussain attended the ‘City College of Karachi,’ where he received his intermediate education. He subsequently went to the ‘Islamia Science College,’ where he earned a Bachelor of Science in 1974.
Hussain was detained in 1978 during his final year at the ‘University of Karachi’ after demonstrating for the return of Pakistanis and was sentenced to nine months in prison and five strokes of the whip. He founded the ‘All Pakistan Muhajir Students’ Organization’ to represent the rights of Muhajir students after his release the following year.

He earned a Bachelor of Pharmacy degree from the ‘University of Karachi’ in 1979. He worked as a trainee pharmacist at the ‘Seventh Day Adventist Hospital’ in Karachi after graduation.
He founded Pakistan’s ‘MohajirQaumi Movement’ (MQM) political party in 1984. In 1997, it was called the ‘MuttahidaQaumi Movement.’

Hussain was arrested after a political demonstration in 1986, however the charges against him were ultimately dropped.

Hussain and other MQM members were detained in 1987, and he didn’t get out until 1988.
MQM and Hussain ran in the national elections in 1988, and the party gained enough seats to join the ruling alliance. The MQM lost control after a series of discussions.
The government launched ‘Operation Clean-Up’ in 1992, sending the military into Karachi and arresting or killing hundreds of MQM members. Hussain was forced to flee to the United Kingdom, where he was granted political asylum.

In 1995, his brother Nasir and nephew Arif were killed in politically driven violence, and their murders were blamed on the government.

He was granted British citizenship in 2002.
Following legislation to encourage national reconciliation in Pakistan, 72 criminal proceedings against him were dismissed in 2009, including 31 murder allegations.

In 2013, he was charged with the assassination of two political leaders, Zahra Shahid Hussain and Imran Farooq.
He was arrested by British authorities on July 3, 2013, and accused with money laundering and hate speech.
Hussain was arrested by British authorities on a second accusation of money laundering on June 3, 2014. He is currently out on bond and has rejected all of the charges leveled against him.

Altaf Hussain is the long-time leader of Pakistan’s Muhajir group and practically controls Karachi, the country’s most populated city.
Since March 18, 1984, Hussain has been the leader of the MQM political party.

Altaf Hussain was once married to Faiza Altaf, but the couple is now divorced. Afzaa Altaf is their only child.

Altaf Hussain is one of the richest Politician & listed on the most popular Politician. According to our analysis, Wikipedia, Forbes & Business Insider, Altaf Hussain net worth is approximately $1.5 Million.

This well-known politician declared on September 17, 2000 that the partition of India and Pakistan was the “greatest error in the history of mankind.” In Pakistan, he is thought to have around 18 million admirers.
Hussain’s childhood house in Azizabad serves as the MQM’s headquarters. The structure is known as “Nine Zero,” after the last two digits of his phone number while he resided there. Following the September 11th terrorist attacks, he contacted British Prime Minister Tony Blair and offered his assistance in fighting the Taliban.