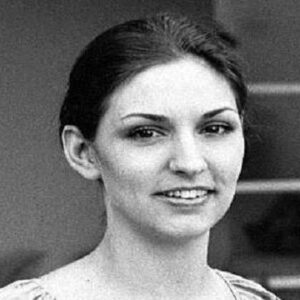 Althea Flynt, née Leasure, was a publisher of American magazines and the wife of Larry Flynt, a publisher of pornographic material. She and Larry shared publishing duties for the pornographic publication Hustler. She was born and raised in Ohio and experienced abuse. When she was eight years old, her father fatally shot himself after also killing her mother and her maternal grandfather. The Ohio Soldiers and Sailors Orphanage (OSSO Home) in Xenia thereafter took care of her. She was sexually assaulted at the houses of the potential adopters, but she kept running away. When she was 17 years old, Larry hired her to work as a go-go dancer at his Hustler nightclub in Columbus, Ohio. Althea went on to become the first life-size centerfold for the “Hustler” magazine and eventually worked as its publisher and editor. She developed a drug addiction in the early 1980s, and AIDS was eventually identified as her illness. She drowned by accident and died at the age of 33.

One of June and Richard Leasure’s five children, Althea Leasure was born in Marietta, Ohio, on November 6, 1953. Debbie, Sherry, and Marsha were her three sisters, while Richard was her only brother. Althea had a difficult upbringing. Before committing suicide, her father fatally murdered her mother, her paternal grandfather, and one of June’s friends. While also present in the house, her grandmother managed to save herself by running to a nearby creek.
Althea was sent to live at the OSSO Home along with three of her siblings. Later, she would admit that she had fled the center multiple times after experiencing sexual assault at the houses of prospective adoptive parents.

Career Larry and Althea first spoke in 1971 when she was being considered for a go-go dancer position at his Hustler club in Columbus, Ohio. He was 29 while she was 17. On August 21, 1976, almost five years later, they got married.
After his club, Larry gave his new pornographic publication the moniker “Hustler.” Althea served as the model for the life-size centerfold in the publication’s first issue. Over time, she managed the development, management, and publication departments while also serving as the magazine’s publisher and editor.

Larry started using the term “born-again Christian” in 1977, and he asserted that he experienced a vision from God while flying on his private aircraft with evangelist Ruth Carter Stapleton, the president’s sister, who officiated the “conversion” ceremony. Althea was the sole person responsible for the magazine’s survival and continued success during this time.

On March 6, 1978, Larry, who was accompanied by his attorney, was shot by a sniper from across the street as he approached the Gwinnett County courthouse in Georgia, where he was contesting an obscenity lawsuit. His spinal cord was irreversibly damaged after the incident, partially paralyzing him. After that, Althea smoothly managed the ever-expanding Flynt enterprise while still caring for him at home.

In addition, Larry received a bipolar disorder diagnosis, which led him to decide to run for president of the United States in 1984. Althea had been preparing to debut a new magazine at the time. Its title, “The Rage,” suggested that it would only be concerned with punk culture. However, Larry’s political ambition took precedence, and the idea for a new magazine was ultimately abandoned.

Larry had been in chronic, severe pain ever since his gunshot, and eventually, had repeated procedures to numb his afflicted nerves. However, he was given various painkillers as a result of the accident and the procedures.

Althea began using those substances in 1982, and by the middle of the 1980s, both of them were dependent on them. She discovered she had AIDS a year later. Larry claims that Althea had the illness after receiving a blood transfusion during a hysterectomy because she had never used a contaminated needle for drug usage.

Althea’s health started to gradually decline after her diagnosis. Despite being confined to a wheelchair, Larry cared for his wife during her final years. She drowned in the bathtub at the couple’s Bel-Air residence in Los Angeles, California, on June 27, 1987, and passed away as a result. She allegedly overdosed on drugs, passed out in the bathtub, and accidentally drowned herself. She was entirely bedridden in the months prior to her death, according to Larry, who later claimed that she would have passed away within a year even if the fatal accident hadn’t happened.

One of the wealthiest and most well-liked family members is Althea Flynt. Our study of data from sources including Wikipedia, Forbes, and Business Insider revealed that Althea Flynt is worth $5 million.

Althea was portrayed by Courtney Love in the 1996 historical drama movie “The People vs. Larry Flynt” (in which Woody Harrelson played Larry).