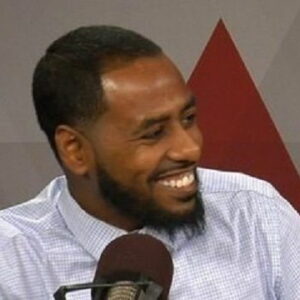 Amin Elhassan is a Sudanese-American sports analyst who presently serves as an on-air commentator for ESPN, a global cable and satellite sports television network. On numerous ESPN programs, such as “His and Hers,” “SportsCenter,” “Mike & Mike,” “The Jump,” and “SportsNation,” he frequently makes an appearance. Along with Izzy Gutierrez, he also co-hosts a show on ESPN Radio. He had previously served as the video coordinator and the scouting coordinator for the Phoenix Suns, where he had also served as an associate director of basketball operations. He was a video coordinator, and one of his responsibilities was to videotape each basketball game that was played. He spent three seasons as a member of the Atlanta Hawks’ game-day operations staff before working for the Phoenix Suns in field marketing. On the social media site Twitter, where he is quite active, he frequently engages with his fans in his very unadorned manner. The #HateHard hashtag, which he developed as an inside joke to foment animosity toward players when he worked for teams, is where he is best known for his humorous but violent jabs. Even at ESPN, it has endured for years to establish itself as his defining look.

Amin Elhassan discovered that, in contrast to many of his friends who were really interested in becoming engineers, his interest in the field was motivated by his desire for a safe job with a good salary while completing his engineering degree at Georgia Tech.

This insight propelled him to explore further chances, which ultimately resulted in a field marketing position with the NBA team Atlanta Hawks. Despite the fact that it was a low-profile role, he liked it and was able to build connections that eventually assisted him in landing a career in the sports sector. He finally received a promotion and spent three seasons working with the Hawks’ game-day operations.

He worked as an intern in basketball operations with the New York Knicks during the 2004–05 season. He then accepted a full-time internship with the Phoenix Suns, where he gradually received greater responsibility, first as a video coordinator, then as a scouting coordinator, and ultimately as the team’s assistant director of basketball operations, working for general manager Steve Kerr.

In the spring of 2012, he made the decision to join another NBA front office, leaving Phoenix Suns and exploring other possibilities. He was requested to create a sample article as a freelancer during this time by an ESPN.com editor he knew. He authored an amazing piece using his connections and front office knowledge, which led to an offer for 10-article freelance employment.

He started working for ESPN full-time in December 2013 and has been doing so ever since. He prides himself on having above-average knowledge of various facets of basketball and has developed into a unique jack-of-all-trades analyst at ESPN, juggling a number of duties. This is despite the fact that he lacks in-depth knowledge of strategy like an ex-coach and is unaware of locker-room dynamics like ex-players.

Amin Elhassan has frequently sparked controversy for his actions on-screen or online because of his no-holds-barred insults and trolling comments on social media. In the midst of a debate about Peyton Manning in February 2016, which he co-hosts with Izzy Gutierrez on ESPN Radio, he left the studio. Before returning to the show to apologize to the listeners, he maintained the Twitter argument for some time.

He received criticism in August 2016 for making light of the 8-year-old son’s reaction video that was shared by Kevin Owens’ wife following his victory at the “WWE Universal Title.” When he said, “Until someone told him it was staged,” on the footage of the youngster sobbing with joy as his father won, he attracted criticism.

The fact that he is still not an American citizen, despite having lived in the US for most of his life, is a more serious problem that has bothered him for a long time and casts doubt on his prospects for a long-term career in the nation.

On April 12, 1979, Amin Elhassan was born in Sudan. When he was a baby, his parents relocated to New York City. He returned to Sudan when he was about eight years old, but at 14 years old, he came back to New York to finish high school.

Although he had a strong interest in sports as a child, he never gave sports a vocation any thought. He was a diligent student as well and chose to pursue a career in engineering because of his aptitude in math and physics. After graduating from high school, he enrolled at Georgia Tech to take an engineering course.