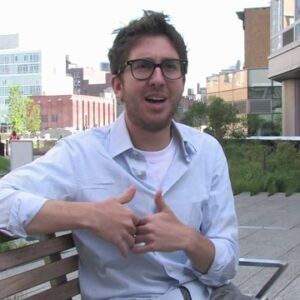 Amir Blumenfeld is a Jewish-American actor, screenwriter, and comedian who relocated to Los Angeles from Israel when he was two years old. He is best known for the website ‘Jake and Amir,’ which he co-founded with his friend Jake Hurwitz, whom he met while interning at CollegeHumor. PC Magazine named the series one of the ‘Top 100 Undiscovered Websites,’ as well as one of the ’15 Best Web-Only Shows.’ At the 14th Webby Awards, it earned the ‘Peoples Voice Award’ for ‘Comedy: Long Form or Series,’ while Blumenfeld received an individual award for ‘Best Performance.’ He was also nominated for ‘Best Male Performance: Comedy’ at the ‘Streamy Awards.’ ‘Jake and Amir: Fired,’ their spin-off single 30-minute episode, is CollegeHumor’s first DVD release. The duo became well-known and performed live in the United States and overseas. They also organized several concerts and gave a lecture at Tel Aviv’s International Student Film Festival. Hurwitz and Blumenfeld starred in the MTV show ‘Money from Strangers,’ and went on to create the ‘If I Were You’ comedy podcast. Blumenfeld has also appeared in the films ‘The Old Man and the Seymour’ and ‘A Very Harold & Kumar 3D Christmas,’ in addition to the web. ‘Louie,’ a comedy series hosted by Louis CK, and MTV’s ‘I Just Want My Pants Back,’ are two of his television performances. He is active on social media and has a sizable fan base as well as a healthy money account.

Amir Shmuel Blumenfeld was born in Afula, Israel, on January 18, 1983, to Jewish parents. He is the eldest of two brothers. When he was two years old, his family moved to Los Angeles, California, USA.

He grew up in a religious family and attended Jewish kindergarten and elementary school. He went on to ‘Milken Community High School,’ a private Jewish high school.

His parents wanted him to succeed in school, so they sent him to summer math and computer camps. He graduated from the University of California, Berkeley’s Haas School of Business with a Bachelor of Science degree.

Blumenfeld has a natural knack for entertaining and a wonderful sense of humor since he was a child. He aspired to work in advertising and marketing while also writing humor on the side.

When he was in his second year at the University of California, he began producing pieces for the comedy website ‘CollegeHumor.’

He was influenced by the humor television shows he grew up watching, such as ‘The Simpsons,’ ‘Seinfeld,’ and ‘Saturday Night Live.’ These factors influenced his decision to pursue a career as a full-time comedian.

The Career of Amir

Amir Blumenfeld had an internship at CollegeHumor after college and then became a full-time writer there. His initial attempt was to write ‘The CollegeHumor Guide,’ a humorous guide to the collegiate educational system. The institution praised him for his efforts.

Blumenfeld and Jake Hurwitz met while interning at CollegeHumor in 2006 and began filming their own short original comedy videos.

Their debut video, ‘Quick Characters,’ went viral, inspiring them to create the ‘Jake and Amir’ website. Their humor was so fantastic that CollegeHumor picked it up and published it on the internet.

Jake plays a normal person, and Amir is his obsessive coworker who is continually getting into problems for doing the wrong things in their serial, which has surpassed 500 episodes.

The show was later transformed into a TV series with several guest performers to add to the value. In 2008, PC Magazine named the series one of the “Top 100 Undiscovered Websites.” It was also named one of the magazine’s “15 Best Web-Only Shows” in 2011.

In October 2011, CollegeHumor released ‘Jake and Amir: Fired,’ a 30-minute episode on DVD that was their first effort to be sold outside of the internet.

It garnered a lot of attention and generated a lot of money for the company.
The team quickly rose to fame and began performing live in places around the United States, Canada, and the United Kingdom.

They also presented a number of shows and even gave a talk at Tel Aviv’s International Student Film Festival. For them, performing in front of a live crowd was a thrilling experience.

Jake and Amir starred in the MTV show ‘Money from Strangers,’ and went on to create the ‘If I Were You,’ a comedy podcast in which they answer listener questions and give humorous advice.

Blumenfeld has also been in a few films, including ‘The Old Man and the Seymour,’ which was a Vimeo ‘Staff Pick’ and screened at the Austin Film Festival, Sacramento Film and Music Festival, and the Los Angeles Short Film Festival.

In the comedy film ‘A Very Harold & Kumar 3D Christmas,’ he played Kumar Patel’s friend Adrian.
‘Louie,’ a comedy series hosted by Louis CK, and ‘I Just Want My Pants Back,’ an MTV show produced by Doug Liman, are two of his previous television appearances.

He is active on social media and has a sizable fan base.

At the 14th Webby Awards in 2010, the website ‘Jake and Amir’ won the ‘Peoples Voice Award’ for ‘Comedy: Long Form or Series.’ Blumenfeld was also recognized for his ‘Best Performance’ during the event.

For his appearance in ‘Jake and Amir,’ he was nominated for the 2013 ‘Streamy Awards’ for ‘Best Male Performance: Comedy.’

Amir considers himself a non-religious Jew. He doesn’t attend the synagogue every Sabbath, and he doesn’t follow the Jewish Kosher regulations. He can, however, communicate in Hebrew and celebrate Jewish holidays with his family.

He is a die-hard basketball fan who cheers on the Los Angeles Lakers. His favorite players are Kobe Bryant and Nick Van Exel.

On and off-camera, Amir is a very different person. He has kept his personal life off social media because he deems it private. According to rumors, he is currently single and has no aspirations to settle down in a meaningful relationship anytime soon.

Amir Blumenfeld is a multi-talented man with a net worth of $700 thousand dollars.

Blumenfeld is a freelance writer for ESPN Magazine who has contributed to the ESPN Guide to Psycho Fan Behaviour.

He also has a column called ‘The Curious Comedian’ in the American digital print and e-commerce media company ‘Mental Floss.’
Andy Bloom was his school nickname.