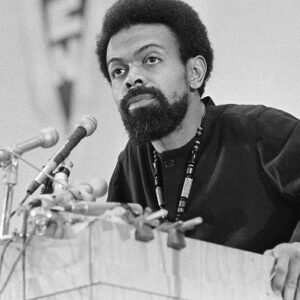 Amiri Baraka was an African-American writer, essayist, playwright, and music critic who was recognized for his cryptic writing style that was frequently difficult to understand. His poems and articles generally dealt with African-American societal issues, and he was known as the creator of the ‘Black Arts Movement.’ His writings focused on African-American music, particularly jazz and blues, as well as their history. As a member of the avant-garde ‘Beat Generation,’ he shifted his political views multiple times before becoming a Black Nationalist. His illustrious career was tainted by controversy, particularly because of his anti-Semitic poetry and writings. He was also recognized for his forthright opinions and candid remarks on political issues such as national oppression and racism. He was praised for his social engagement as much as his writing, and he received a number of renowned literary awards and medals. Baraka has also taught at various institutions and was instrumental in defining ‘Black Literature,’ inspiring countless others in the process. Baraka was one of the most widely published Black writers of his period, alongside James Baldwin.

After relocating to Manhattan’s Greenwich Village, he developed a passion for jazz, which drove him to pursue a side career as a music critic.
He also studied philosophy at Columbia University and attended the ‘New School for Social Research’ but did not complete his studies.

He became the magazine’s editor in 1958 after marrying Hettie Cohen, the co-founder of ‘Yugen,’ a literary journal. They later formed the ‘Totem Press,’ which went on to print works by well-known ‘Beat writers,’ such as Allen Ginsberg and Jack Kerouac.

‘Preface to a Twenty-Volume Suicide Note,’ his debut collection of poetry, was released in 1961.
He worked as an editor of ‘The Floating Bear,’ a literary newsletter, with Diane Di Prima from 1961 to 1963. He also joined the ‘Umbra Poets Workshop,’ a group of African-American poets from Manhattan, around this time.

‘Blues People: Negro Music in White America,’ his critique of African-American music, was released in 1963.
He taught creative writing at Columbia University from 1963 to 1965. During this time, he became a playwright and rose to prominence with the production of ‘Dutchman,’ a critically praised and divisive play. He has written other plays since then, including ‘The Slave-1964’ and ‘The Death of Malcolm X-1969.’

Following the killing of Malcolm X, an African-American civil rights activist, in 1965, he became suspicious of the ‘white community’ and abandoned the ‘white Beat movement’ and Greenwich Village.
After coming to Harlem in 1965, he created the ‘Black Arts Repertory Theatre,’ in which members utilized their plays to criticize racism.

He became a visiting lecturer at San Francisco State College in 1967, and a year later, he published ‘Black Music,’ a compendium of his music criticisms previously published in various periodicals.
He wrote a number of anti-Semitic poems and writings in the early 1970s, which critics saw as anti-Semitic.

In 1974, he converted to Communism, claiming that the United States’ deteriorating economic situation was the foundation of all of the country’s issues.

He began teaching Africana Studies at Stony Brook University in 1979.
‘The Autobiography of LeRoi Jones/Amiri Baraka,’ published in 1984, was his autobiography.

Major Works ‘Dutchman’ is a divisive but critically acclaimed play created during a period when Baraka was a supporter of ‘Black Nationalism,’ a movement that called for African-American segregation. This drama depicts a fortuitous encounter between a white woman and a black man on the metro. It premiered at the Cherry Lane Theatre in New York on March 24, 1964, and was converted into a film in 1967.

He has received a number of prestigious awards, including the Guggenheim Fellowship (1965), the Rockefeller Foundation Award for Drama, and the National Endowment for the Arts.
He also got the Lifetime Achievement Award from the “Before Columbus Foundation.”
He was named to the ‘100 Greatest African-Americans’ list in 2002.

He married Hettie Roberta Cohen, a Jewish woman, in 1958 and the pair had two children. Following the assassination of Malcolm-X, he moved to Harlem and they divorced.

Sylvia Robinson, a black lady who changed her name to Bibi Amina Baraka, became his second wife in 1966. In the following year, they married and remained together until his death in 2014.
On January 9, 2014, he died as a result of complications following a recent surgery.

Amiri is one of the wealthiest poets and one of the most well-known. Amiri Baraka’s net worth is estimated to be $1.5 million, according to Wikipedia, Forbes, and Business Insider.

This well-known African-American novelist has appeared in documentaries such as ‘Black Candle’ and ‘Motherland.’