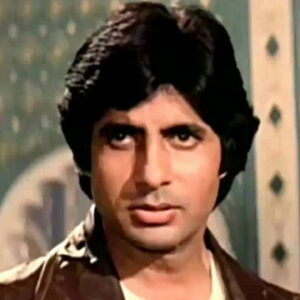 Amitabh Bachchan is a well-known Indian actor, film producer, television personality, and politician. He is primarily known for his roles in Hindi and Bollywood films. He became renowned as the ‘angry young man’ of Hindi cinema thanks to his outstanding performances in films like as ‘Deewaar’ and ‘Zanjeer.’ At the height of his career, he was so well-known that François Truffaut, a prominent French director, referred to him as a “one-man enterprise.” He has played a variety of roles in comedies and dramas in addition to action films. Throughout his career, the actor has demonstrated his flexibility. His portrayal of a spurned lover in the film ‘Parwana’ is an illustration of his versatility. Despite some setbacks in his career, the talented actor was able to rebound with strong performances in a number of successful films. He has received four ‘National Film Awards,’ the highest accolade bestowed to an Indian actor. He has received various accolades from the Indian government, including the ‘Padma Shri,’ ‘Padma Bhushan,’ and ‘Padma Vibhushan,’ for his outstanding contribution to Indian cinema. ‘Sholay,’ ‘Amar Akbar Anthony,’ ‘Agneepath,’ ‘Kabhi Kabhie,’ ‘Silsila,’ ‘Muqaddar Ka Sikandar,’ ‘Lawaaris,’ and ‘Satte Pe Satta’ are among his most well-known films. He’s also won awards for movies including ‘Black,’ ‘Baghban,’ ‘Sarkar,’ and ‘Paa.’

Amitabh Bachchan was born Inquilaab Srivastava to Hindi poet Harivansh Rai Bachchan and Teji Bachchan on October 11, 1942, in Allahabad, United Provinces, British India. Ajitabh, Amitabh’s younger brother, is Amitabh’s younger brother.
He attended ‘Sherwood College,’ Nainital, for his elementary and secondary schooling. He earned his bachelor’s degree from ‘Kirori Mal College,’ which is part of the ‘University of Delhi.’ Amitabh has two master’s degrees under his belt.
Despite the fact that Amitabh’s surname was Shrivastava, Harivansh’s pen name ‘Bachchan’ became his immediate family’s surname.

Following his mother’s advice, Amitabh made his Hindi film debut in 1969 as a voice narrator in filmmaker Mrinal Sen’s film ‘Bhuvan Shome.’ The film, starring Utpal Dutt, received the prestigious ‘National Award.’
In the same year, he appeared in the film ‘Saat Hindustani,’ opposite Utpal Dutt, Jalal Agha, Anwar Ali, and Madhu.
He had a minor part in Rajesh Khanna’s film ‘Anand’ in 1971. His portrayal of a pessimistic doctor received positive reviews. He later appeared in films such as ‘Reshma Aur Shera’ and ‘Parwana.’ He also appeared in the Jaya Bhaduri film ‘Guddi.’ In the 1972 film ‘Bombay to Goa,’ directed by S. Ramanathan, Bachchan played a comedic part.
‘Zanjeer,’ directed by Prakash Mehra, was released in 1973 as an action crime film. He played the protagonist, ‘Inspector Vijay Khanna,’ in the film. He was cast opposite Jaya Bhaduri, and Pran backed him up. The film was a great smash, and it cemented Amitabh’s reputation as Bollywood’s “angry young man.”

Many people praised him for his performance as ‘Vikram’ in Hrishikesh Mukherjee’s film ‘Namak Haraam.’
The talented actor performed in box-office smashes like ‘Majboor,’ which was inspired by the Hollywood film ‘Zig Zag,’ during the next two years. ‘Chupke Chupke,’ ‘Mili,’ and ‘Faraar’ were among his other films. He made a name for himself in the Indian cinema business by appearing in films of various genres.

The year 1975 was significant in his career because it saw the release of two of his cult films, notably ‘Deewaar’ and ‘Sholay.’ Shashi Kapoor, Neetu Singh, and Nirupa Roy co-starred in ‘Deewaar,’ while Sanjeev Kumar, Dharmendra, Hema Malini, and Jaya Bachchan were among the ensemble group in ‘Sholay.’ ‘Sholay’ was a box office smash, grossing INR 350 million. He acted in Yash Chopra’s film ‘Kabhi Kabhie’ in 1976, in which he portrayed a love character. His character in the film falls in love with a woman who later marries another man. Rakhee and Shashi Kapoor, both renowned performers at the time, also appeared in this love triangle. Many people praised his performance in ‘Amar Akbar Anthony,’ opposite Rishi Kapoor and Vinod Khanna, as ‘Anthony Gonsalves.’ ‘Amar Akbar Anthony’ became one of the most successful films of all time.

Satyajit Ray, a prominent Bengali filmmaker, was drawn to Bachchan’s voice, which is believed to be his most valuable quality. Ray used him as a narrator in his 1977 film ‘Shatranj Ke Khilari.’ He went on to star in a number of successful films over the next few years, including ‘Muqaddar Ka Sikandar,’ ‘Trishul,’ ‘Kasme Vaade,’ and ‘Don.’ In the films ‘Don’ and ‘Kasme Vaade,’ he played two characters. ‘Don’ went on to become one of his most commercially successful films. In addition to ‘Suhaag,’ ‘Kaala Patthar,’ ‘Mr. Natwarlal,’ and ‘The Great Gambler,’ he appeared in ‘Suhaag,’ ‘Kaala Patthar,’ ‘Mr. Natwarlal,’ and ‘The Great Gambler.’ ‘Dostana,’ ‘Silsila,’ ‘Lawaaris,’ ‘Desh Premee,’ ‘Naseeb,’ and ‘Satte Pe Satta’ were among Amitabh’s best films from 1980 to 1982.

Bachchan was critically harmed and lost a lot of blood after rupturing a spleen in the belly during filming an action sequence for ‘Coolie’ on July 26, 1982. He shot the rest of the film after taking a break, and it was released the following year. ‘Coolie’ was a hit with the audience and quickly became one of the most popular films of the time.
His employment as an actor was impeded by Myasthenia gravis, an autoimmune neuromuscular condition, which he developed in 1983. He took a hiatus from acting during this time and dabbled in politics.
In 1984, the actor entered politics and backed Rajiv Gandhi, the then-Indian Prime Minister. He was elected to the eighth Lok Sabha from the Allahabad constituency, but stepped down three years later.
In 1988, Amitabh returned to the big screen with the starring role in ‘Shahenshah.’ The film was a huge success. ‘Toofan,’ ‘Jaadugar,’ and ‘Main Azaad Hoon,’ on the other hand, were box-office flops.’
He appeared in films such as ‘Agneepath,’ ‘Khuda Gawah,’ and ‘Hum’ between 1990 and 1992. He then took a vacation from acting for a while. He started his own production firm, ‘Amitabh Bachchan Corporation, Ltd,’ to become a producer (ABCL). ‘Tere Mere Sapne,’ starring Arshad Warsi and Simran, was one of the company’s box-office flops. As a result, the corporation sustained significant losses.

Bachchan made a resurgence as an actor between 2000 and 2005, starring in hit films such as ‘Mohabbatein,’ ‘Ek Rishtaa: The Bond of Love,’ ‘Kabhi Khushi Kabhie Gham…,’ ‘Baghban,’ ‘Khakee,’ ‘Bunty Aur Babli,’ and ‘Black.’
The delicate relationship between a deaf-mute-blind girl and her instructor, played by Amitabh Bachchan, was dramatized in ‘Black.’
During this time, the talented actor hosted a TV show named ‘Kaun Banega Crorepati’ (KBC), which became one of India’s most popular series. The show was developed from Chris Tarrant’s TV show “Who Wants to Be a Millionaire?” in the United Kingdom.
He appeared in the Academy Award-winning French documentary ‘March of the Penguins,’ directed by Luc Jacquet, in 2005.
‘Sarkar,’ ‘Baabul,’ ‘Kabhi Alvida Naa Kehna,’ ‘Nishabd,’ ‘Cheeni Kum,’ and ‘Shootout at Lokhandwala,’ were among the films he appeared in during the next few years.’ ‘Sarkar’ is a rough adaptation of Mario Puzo’s bestselling novel ‘The Godfather.’
The acclaimed actor starred in director Rituparno Ghosh’s English-language film ‘The Last Lear’ in 2007. At the ‘Toronto International Film Festival,’ the film and his performance received critical acclaim.
In Mira Nair’s ‘Shantaram,’ the popular actor was cast with Johnny Depp. The film, however, has yet to see the light of day. In 2008, he played the character of a ghost in the film ‘Bhoothnath.’ He was also cast in the sequel to ‘Sarkar,’ ‘Sarkar Raj.’
He hosted ‘Bigg Boss,’ a national television reality show, the following year. He also acted in the hit film ‘Paa,’ in which he played a 12-year-old boy suffering from progeria, a rare degenerative condition.
In 2010, he co-starred alongside Mohanlal in his first Malayalam film, ‘Kandahar.’

In 2013, he starred opposite Toby Maguire and Leonardo DiCaprio in the Hollywood film ‘The Great Gatsby,’ playing the character of ‘Meyer Wolfsheim.’ The next year, he appeared in the Hindi TV series ‘Yudh,’ portraying a businessman.
This actor has voiced characters in films such as ‘Balika Badhu,’ ‘Lagaan,’ ‘Parineeta,’ ‘Jodhaa Akbar,’ ‘Kahaani,’ and ‘Krrish 3.’
In 2018, he was cast in the film ‘Jhund,’ in which he had a pivotal role. The next year, he was cast as ‘Amrish Malhotra’ in ‘Gulabo Sitabo,’ a family comedy-drama film.

‘Sholay,’ in which Amitabh played ‘Jai,’ became one of Hindi cinema’s most popular films. For its portrayal of an unconditional friendship between ‘Jai’ and ‘Veeru,’ the 1975 film is still adored and watched today. Dharmendra portrayed the character of ‘Veeru.’
Amitabh Bachchan is also recognized for his role in R. Balakrishnan’s film ‘Paa.’ His real-life son Abhishek plays the role of the actor’s father in the film, in which he plays a small child.

The Indian government has bestowed various accolades upon him, including the ‘Padma Shri,’ ‘Padma Bhushan,’ and ‘Padma Vibhushan.’
For films like ‘Agneepath,’ ‘Black,’ and ‘Paa,’ the actor won the ‘National Film Award.’ ‘Anand,’ ‘Amar Akbar Anthony,’ ‘Aks,’ and ‘Don’ are among the films for which he has received ‘Filmfare Awards.’
At Egypt’s ‘Alexandria International Film Festival,’ he was named ‘Actor of the Century.’

In 2007, the French government bestowed upon him the title of ‘Knight of the Legion of Honour,’ the country’s highest honor. ‘University of Delhi,’ India, ‘Academy of Arts,’ Egypt, ‘Leeds Metropolitan University’ and ‘De Montfort University,’ UK, and ‘Queensland University of Technology,’ Australia have all bestowed honorary doctorates on the famed actor.

Amitabh Bachchan married Jaya Bhaduri, a well-known actress in her own right, in 1973. She was well-known even before Amitabh started dominating the spotlight. Abhishek is the couple’s son, while Shweta is their daughter.
Shweta is married to Nikhil Nanda, a business entrepreneur, and Abhishek is married to Aishwarya Rai, a former Miss World and actress. Aradhya is the daughter of Abhishek and Aishwarya.
Bachchan’s wax statue was carved by ‘Madame Tussauds’ in 2000, making him the first Asian to receive the accolade. His statues can also be found in New York, Hong Kong, and Washington, D.C.
Deauville, France, bestowed honorary citizenship on him in 2003.
This actor is well-known for his humanitarian endeavors, which include financial assistance to farmers in Andhra Pradesh and Maharashtra worth 11 and 30 lakh rupees, respectively.

In 2002, the United Nations Children’s Fund (UNICEF) named him as the ambassador for its polio eradication campaign in India. He continues to appear in all of their television commercials, urging young moms to vaccinate their children. India was proclaimed polio-free by the World Health Organization in 2014. Meanwhile, he founded the ‘HRB Memorial Trust,’ named after his father, in 2013. The actor is also a strong supporter of the ‘Save Our Tigers’ movement and ‘People for the Ethical Treatment of Animals’ (PETA).

This Bollywood celebrity is said to have a net worth of $400 million.

This well-known Bollywood actor was given the name Inquilab (Revolution) by his father, but he was eventually renamed to his current moniker.