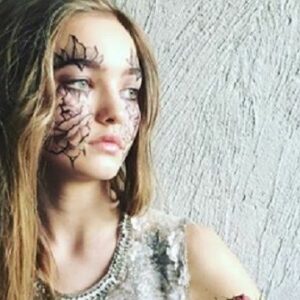 Russian child actress and model Anastasia Dmitrievna Bezrukova is well-known in her country. She is regarded as one of the most attractive young models in the world at such a young age. Anastasia, who was born and raised in Moscow, Russia, began modeling at a very young age. She was a well-known personality in the global fashion industry by the time she turned 10 years old. She has taken part in picture shoots for well-known fashion companies including “Moschino,” “Benetton,” and “Pinko,” and she has adorned the cover of the Italian children’s fashion publication “Vogue Bambini.” She made her acting debut in the movie “The Milky Way,” which she starred in, in October 2015. She quickly appeared in a few music videos and another movie, “After You’re Gone,” and she is also an accomplished dancer and gymnast who learned the sport for a movie. She exudes potential and eagerly awaits new modeling opportunities. She is considering a couple of film options after being approached by reputable filmmakers. Although she is a student right now, she hopes to work as an actor in the future. She is pretty well-known and already has more than 225,000 followers on the social media platform Instagram.

On January 5, 2004, Anastasia Bezrukova was born in Moscow, Russia, to Svetlana, a businesswoman, and lawyer Dmitry. Ana was brought up in a warm household with a younger sister and showed an early interest in performing.
Her curiosity was well supported by her parents. A modeling agent was soon introduced to her by her mother after being captivated by her elegance and beauty.

With time, Anastasia began to receive several proposals to promote various brands. She was able to draw in numerous local firms thanks to her photo shoot with renowned celebrity photographer Zhanna Romashka. She initially worked with children’s brands, but she was soon contacted by a large number of global corporations that wanted her to support their products.

She was able to ascend the success ladder because of her popularity. Soon, she was the face of numerous products and could be seen on the covers of prestigious magazines. Pinko, Armani, Benetton, and Moschino were some of her most well-known customers.

She has worked for several of the most popular fashion and lifestyle publications in Europe, including “Collezioni,” “Vogue Bambini,” and “Harper’s Bazaar.”

She became a great star in Russia, Italy, France, and other European nations by the time she was 10 years old. She eventually began to receive notice on a global scale as her appeal began to transcend regional boundaries. Several American corporations also made modeling offers to her.

She currently balances her modeling profession with education. She reportedly wants to work in Hollywood as well. She has reportedly already begun honing her English language abilities.

She has so far made appearances in two movies and several music videos. With the release of “The Milky Way” in 2015, she made her acting debut. In the movie, she performed the major part and received a lot of praise for it, is described as “too mature for her age.”

She had a strong start before making an appearance in “After You’re Gone.” Anastasia’s second film director, Anna Matison, who also handled the direction of her debut film, had requested that she take dancing lessons before accepting the part. After that, Anastasia improved her acting and dancing abilities, becoming one of the movie’s key features.

She has also been in the song video for the social initiative “Sleeplessness,” and she is currently weighing up a few other offers for movies and music videos.

Anastasia, who has just recently entered her teen years, has huge dreams for the future and hopes to become a well-known actor around the world. She has a lot more followers than the average young model could ever expect to have—more than 225,000 on Instagram, and more than 30,000 on Facebook—and she has more than 225,000 followers overall.

She gets along well with fellow Russian model Kristina Pimenova, a young woman. Despite being seen as competitors in their respective fields, they have openly said that they are good friends.

In an interview, Anastasia, who is very close to her mother, said that it is unusual for parents to want their children to pursue modeling careers at such a young age and that she is incredibly grateful to her mother for all of the support she has provided.

Contrary to what most people think, Anastasia does not have a glamorous life. Her mother oversees all of her finances, and she keeps no record of how much money she has earned to date.