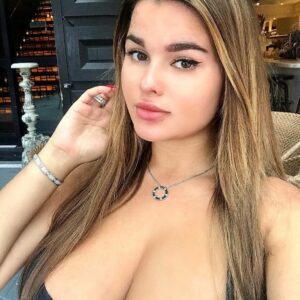 Anastasia Kvitko is a Russian entrepreneur and glamor model. Her curvy form has helped her become one of the most popular internet superstars, earning her the nickname “Russian Kim Kardashian.” Anastasia was born and reared in Kaliningrad, Russia, with a sister. Her father was a well-known businessman, and her mother was a kindergarten teacher. She has been interested in exercise since she was a child. A fashion photographer noticed her after she graduated from high school. She quickly applied to a number of modeling companies in Russia. However, because she possessed a highly curvy shape, she was advised to reduce weight before pursuing professional modeling. Anastasia declined, and instead relocated to Miami. She had a similar destiny in the United States, where industry specialists advised her to drop weight. She resisted once more and turned to ‘Instagram.’ She grew into an internet sensation over time. Several modeling opportunities presented themselves to her. She’s also debuted her own swimwear brand, dubbed ‘AC-350,’ at the ‘New York Fashion Week.’

Anastasia Kvitko was born on November 25, 1994, in Kaliningrad, Russia. Her mother was a primary school teacher and her father was a businessman. She had a sister when she was younger.
Anastasia has been physically active since she was a child. She enjoyed working out and participating in sports. She also adhered to a strict vegetarian diet. This improved her health and fitness even more.
Anastasia was initially discovered after graduating from high school. She was discovered by a fashion photographer in Russia, who gave her a job. She applied to a number of major modeling agencies after landing some small-time modeling jobs in Russia. Her voluptuous body, which she considered to be her most valuable feature, was not well received by agencies. She was told that she needed to drop weight, but she refused.

By 2014, she had already established herself as a model in Russia. She rose to prominence after appearing in the shoot for the article ‘The Girl of the Day’ on the Russian social networking website ‘Vkontakte.’ Following her triumph, she relocated to Moscow, Russia’s fashion center. She conducted a photo session for the ‘Rhyme Magazine’ there, which helped her gain even more fame.
She’d garnered a local following and was being dubbed the “Russian Kim Kardashian” at the time. Her ambitions, on the other hand, were far higher.
She considered relocating to the United States in order to improve her modeling prospects. She moved to Miami when she was 17 years old. Her first experience in the large city, though, was terrifying. She was robbed at gunpoint once. She began to have second thoughts about her profession after the incident and pondered returning to Russia.
However, she continued to apply to modeling agencies in the United States, where she was frequently told that she needed to slim down and lose weight because of her big curves. She, on the other hand, refused once more and chose to forge her own way.
She relocated to the Los Angeles area. She became discouraged once more when she was unable to discover acceptable opportunities. She already knew that social media was a powerful venue for struggling models at the time. She went to ‘Instagram’ and began posting her photos.
In August of 2014, she created a new ‘Instagram’ profile. Her ‘Instagram’ presence quickly developed a sizable following. She amassed over a million followers on the platform in less than a year. She had photo shoots with well-known photographers and also shared selfies.
Her voluptuous shape, which had previously been a major stumbling block on her quest to become a well-known model, had now become her most prominent claim to fame. She didn’t hold back in showing off her figure in the photos she shared. She eventually set up accounts on ‘Twitter,’ ‘Facebook,’ and other social media sites, but ‘Instagram’ remained her most successful platform.
She now has more than 9 million followers on her Facebook profile, making her a major star. She was also offered a job with Kanye West’s apparel company.
She was also offered a music video with Pitbull and Yandel as she became the buzz of the fashion world in the United States. In their music video for the song “Ay mi Dios,” she made an appearance. To date, the music video, which was posted in 2016, has received over 528 million “views.” She’s worked as a model for innerwear, corsets, and branded suits. With the aid of brands like ‘Mia,’ she has also performed a few gigs at nightclubs. Her voluptuous figure has attracted a slew of Colombian fashion labels.
She also gained a lot of popularity in Latin America. She made her television debut in the Spanish television series ‘Un Nuevo Dia,’ which was a huge hit.
She was approached to become a brand ambassador for ‘Eliya Cioccolato,’ a popular garment brand, near the end of 2016. In 2016, she was named one of the sexiest ladies in modern Russia. She came in third place in the final standings.
Anastasia’s modeling career did not end there. She had loftier ambitions. She aspired to be renowned as a “beauty with brains” and to start her own business. As a result, she established her own swimwear brand, ‘AC-350,’ which she debuted at ‘New York Fashion Week.’

Anastasia has received a lot of backlash for rejecting claims that she had undergone buttock surgery. She also agreed to take any test to substantiate her point. Her claims were once dismissed by a major Russian journal, which stated that based on her old photographs, it was practically impossible for her to get such a figure exclusively through natural means. Anastasia has been compared to Kim Kardashian several times. Anastasia, on the other hand, is not fond of the similarities. She’s also said that she thinks she’s better than Kim because she’s never had surgery, although Kim has had several on her face and body.
Anastasia has always been candid about her personal life. When she was a teenager in Russia, she had a boyfriend. They both moved to Moscow to further their careers, but their relationship was short-lived.
Timati, a Russian rapper, has also been linked to her. Arseny Sharov is her current boyfriend.

Anastasia Kvitko has a net worth of approximately $2 million.