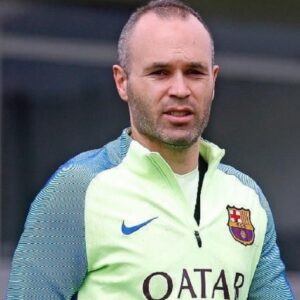 Andrés Iniesta is a Spanish footballer who has represented both his country and his club, FC Barcelona. He currently serves as the captain of ‘FC Barcelona.’ He was born in a small village in the province of Albacete, Spain, and joined the ‘Albacete Balompié’ club as a child before being spotted by ‘Barcelona’ agents. Iniesta was signed by ‘Barcelona’ for their development program, and he led his squad to victory in the ‘Nike Premier Cup’ in 1999. He was dubbed ‘Player of the Tournament’ after scoring the winning goal for his team in the last minute of the nail-biting final match. He made his first-team debut for ‘Barcelona’ in 2002. He became a regular with the team in 2004. He has remained an inseparable member of the team since then. He has won more trophies than any other Spanish footballer in the game’s history, having guided his team to two trebles. He’s also played for his country’s national team in a variety of age categories. He was a member of the Spanish teams that won the 2008 ‘Euro Cup,’ the 2010 ‘World Cup,’ and the 2012 ‘Euro Cup’ after making his senior-team debut. He is widely regarded as one of the best footballers of his generation and one of the greatest midfielders of all time.

Andrés Iniesta was born in Fuentealbilla, Spain, on May 11, 1984, to José Antonio and Mara Luján. In Albacete, his father was a well-known merchant. Andrés grew raised in a comfortable environment, and his love for football has been entrenched in him since he was a small child.

His father enrolled him at the ‘Albacete’ youth academy when he was ten years old, and the small lad did miracles with his performances. He first got the eye of prominent Spanish clubs two years later while participating in a competition. Andrés was sent for a trial because of his father’s contacts with the administration of ‘FC Barcelona,’ and he was successful in gaining their admiration.

Andrés was a bashful child who struggled to adjust to life in ‘Barcelona.’ He originally begged his parents not to let him leave, but his father persuaded him otherwise. Andrés’ affiliation with the ‘La Masia’ youth football academy, which was part of the ‘Barcelona’ youth program, spelled the true making of the superstar that he would later become.

Andrés was not quite a teenager when he joined the academy, and he was the academy’s youngest athlete, which raised eyebrows among the administration. His father’s involvement, on the other hand, cleared the air, and Andrés soon began training with them. He gradually developed into the academy’s greatest player, eventually becoming captain of their ‘Under-15’ squad. In 1999, he captained his team to victory in the ‘Nike Premier Cup,’ for which he was also named ‘Player of the Tournament.’

Andrés eventually joined the main squad of ‘Barcelona,’ making his debut in 2004. In his first season with the club, he only missed one game. He scored twice and was instrumental in ‘Barcelona’s’ La Liga win.’ As a midfielder, his primary responsibility was to defend rather than score goals.

Andrés proved that he could play any position during the 2006–2007 season with his outstanding performances. During the preseason, he captained his club and helped them win the ‘Joan Gamper Trophy.’ Despite rumors of a transfer, he signed a new contract with ‘Barcelona’ in 2008, committing to the squad until 2014.

Andrés was at the pinnacle of his career during the 2008–2009 season, receiving standing ovations not only from his home audience of ‘Barcelona,’ but also from his opponents. In the 2009 ‘Champions League’ semi-finals against ‘Chelsea,’ he scored a goal in the penultimate minute to tie the game. The team advanced to the finals and won the trophy by defeating ‘Manchester United.’ Wayne Rooney, of ‘Manchester United,’ said after the competition that Andrés was the finest player in the world.

Andrés was later named the league’s most consistent player and placed sixth on FIFA’s ‘Player of the Year’ list in 2009. Despite being injured for the majority of the season, he never missed a vital match. In the 2010–2011 season, he finished second in the race for the ‘Ballon d’Or,’ and in 2012, he finished third.

He scored in vital matches to assist ‘Barcelona’ win the ‘Supercopa de Espaa’ title in 2011–2012. In the 2011 ‘La Liga,’ he guided ‘Barcelona’ to a 51-match undefeated streak, a club record. He scored in the quarterfinals and semi-finals of the 2012 ‘Champions League,’ but was unable to prevent his club from being eliminated in the semi-final match against ‘Chelsea.’

In 2013, he signed a new five-year contract with ‘Barcelona,’ and was promoted to captain the following year. He scored the game-winning goal in the 2015 ‘UEFA Champions League’ final and was named ‘Man of the Match.’ ‘Barcelona’ became the first club in history to win the domestic league, the European Cup, and the domestic cup all in the same season. Andrés was one of seven ‘Barcelona’ players to play in a treble-winning team.
With the intention of keeping him for the rest of his career, ‘Barcelona’ signed a deal with Andrés that said they would keep him for the rest of his career.

Andrés has been a member of the Spanish national team since before the turn of the century. In 2001, he was instrumental in his team’s victory at the UEFA European Under-16 Championship. He also contributed to his country’s victory in the ‘European Under-19 Championship.’ He was a major member of the team that advanced to the finals of the ‘FIFA World Youth Championship’ in 2003, but was eliminated in the finals. At the conclusion of the competition, he was named to the ‘FIFA All-Star’ team.

He was unexpectedly selected to captain the Spanish team at the 2006 ‘World Cup,’ and then represented his country at the ‘UEFA Euro 2008,’ when he was named to the ‘Team of the Tournament.’ Due to an injury, he was unable to compete in the 2009 ‘FIFA Confederation Cup.’

During the 2010 ‘FIFA World Cup,’ he achieved his greatest career achievement. He became one of the leading contenders for the ‘Golden Ball’ award after playing brilliantly to secure a position for his team in the finals. In the final match, his squad would face the Netherlands. When Andrés scored the game-winning goal in the 116th minute, the game was on the verge of becoming a tie. Andrés was selected ‘Man of the Match’ for his outstanding performance in Spain’s first-ever ‘World Cup.’

He was also named the UEFA Player of the Season for 2012. He was named to the ‘Team of the Tournament’ and received the ‘Silver Ball’ award, which is presented to the second-best player, at the 2013 ‘FIFA Confederations Cup.’

In 2008, Andrés Iniesta began dating Anna Ortiz. In 2012, the couple married after four years of dating. There are three children in the family: a son and two daughters.
Andrés has a strong emotional attachment to his childhood club, ‘Albacete,’ and has invested in its success. He also aided them financially at a critical time.

Andres Iniesta has a net worth of $120 million dollars.