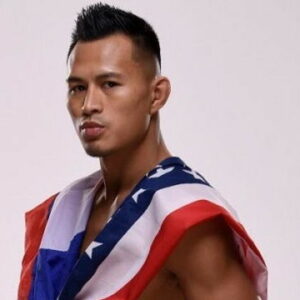 American mixed martial artist Andre Soukhamthath participates in the Ultimate Fighting Championship’s bantamweight division at the moment. He became the first Lao-American fighter to be hired to the UFC when he inked his initial contract with the company in early 2017. He had been the defending bantamweight champion while fighting for CES MMA in his home state of Rhode Island when he joined the UFC. He immediately established himself as “The Asian Sensation” in the UFC as a champion on the local stage. However, he was defeated by split decisions in both his promotional debut fight against Albert Morales at UFC 209 on March 4, 2017, and his subsequent bout against Alejandro Pérez at UFC Fight Night 114 on August 5, 2017. On December 9, he defeated Luke Sanders in Fresno, California, by TKO in the second round to earn his first UFC victory. Later, on March 3, 2018, he competed in the highly anticipated battle at UFC 222 at the T-Mobile Arena in Las Vegas against the 9-0 undefeated bantamweight fighter Sean O’Malley, however, he was defeated by unanimous decision.

William and Chanthalangsy Soukhamthath welcomed Andre into the world on October 13, 1988, in Providence, Rhode Island. His parents are also immigrants from Laos. In a refugee camp, his father, who had escaped the Vietnam War for Thailand, began practicing Muay Lao boxing.

His mother immigrated to the country with her foster parents after being adopted by an American family as a young child. Andre was a soccer superstar when he was younger and received scholarships from several institutions.

In his early years, Andre Soukhamthath was passionate about soccer and wanted to pursue a career as a goalie. He had even been able to secure many college scholarships as a result of his outstanding goaltender play. But as he was getting ready to enroll in college after finishing his high school education, a series of things happened that completely altered his professional path.

At the time, his fiancée Jamie became pregnant with their first kid, which made him give up his aspirations of playing soccer. He made the choice to hunt for a job so that he could take care of his child rather than pursue a goaltending opportunity in college. He joined the gym across the street from where he used to work at the same time as he started a menial job.

He was made aware of professional fighting by one of his friends, who suggested that he could like boxing. He quickly became dependent on it and never missed a training session. He had a 1-2 amateur record by the time he made his professional debut in 2011. He won the regional title of CES MMA Bantamweight in the ensuing years, and in early 2017 he signed a deal with the UFC.

He was about to lose his UFC contract after his intended opponent was hurt when he offered to fight Luke Sanders in Fresno, California. He had lost his previous two professional fights by split decision. In December, he made a comeback with a knockout victory against top prospect Luke Sanders, earning him a new five-match deal with the UFC.

Sean O’Malley, who was discovered during the UFC’s Tuesday Night Contender Series and was the star behind whom the organization was pouring a lot of money, was placed against him after his first UFC victory. O’Malley was Sanders’ teammate at The MMA Lab.

In response to his pre-fight insults, Andre referred to him as “fake” in a number of pre-fight interviews, claiming that despite the hype around him, he is more well-liked by true MMA fans. Even though he ultimately was unable to end his opponent’s unbeaten streak, by the time the bout was ended, he had already achieved stardom.

In 2006, while Andre Soukhamthath was still a teenager attending school, he started seeing a woman named Jamie. After Jamie unexpectedly became pregnant with their first child just as he finished school, the relationship rapidly took a serious turn.

Andre, their son who was born in 2007, suffered from epidermolysis bullosa, a rare skin condition that results in blistering and extremely delicate skin. After the baby died after nine months, Jamie withdrew from society for nearly five years, with the exception of taking care of her husband. Andre concentrated more on his cage fighting to help him deal with the defeat.

They moved to South Florida around five years ago, and the environment there—especially for his wife—has greatly helped their mental health. After overcoming difficult circumstances, the couple is now the proud parents of two kids, Benson and Parker.

Andre is one of the wealthiest mixed martial artists and is among the most well-liked fighters. According to our research, Andre Soukhamthath has a net worth of $5 million, as reported by Forbes, Wikipedia, and Business Insider.