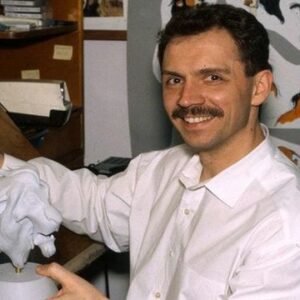 Andreas Deja is one of our generation’s most well-known and regarded animators. His numerous spectacular and famous works are the result of his unique blend of comprehensive Disney knowledge, extensive study of Disney’s original animators’ work, and personal artistic skill. Since he was eleven years old, he has aspired to work for Disney, and he has been able to realize his childhood aspirations by inventing his own Disney characters. He is most known for creating some of Disney’s most famous villains, including Gaston, Jafar, and Scar. He’s also worked on some of Disney’s most popular characters, such as Hercules, Lilo, and Mickey Mouse. His work is the best example of an original Disney animator’s work being sculpted into a more modern, yet classic, style, and his impact continues to inspire animators to this day. His prodigious artwork depicts each character’s expressions, feelings, thought processes, and movements in the most accurate way possible. He has always maintained that Disney’s best work is all about hand-drawn animation, and he has stepped down from his 30-year Disney career due to the recent shift toward CG animation. He continues to work on his own cartoons in his spare time, but he will always be remembered as one of Disney’s great character designers.

On April 1, 1957, in Gdask, Poland, this gifted animator was born. A year later, his family relocated to Germany, where he spent his boyhood immersed in the Disney universe.

When the visionary first saw ‘The Jungle Book’ in 1968, he was immediately inspired to work for Disney Studios as an animator. He was so serious about the ambitions that he wrote to the studio, asking how he could apply to work as an animator.

He studied graphic design at the ‘FokwangHochschule’ in Essen, Germany, in the late 1970s. He sent his best drawings to Eric Larson, the chief of Disney’s training program, while still in school.

Disney took the student to a four-week training session after seeing his drawings and employed him in 1980. He eagerly accepted and relocated from Germany to the United States.

In 1985, he worked on his debut picture, ‘The Black Cauldron,’ as a character designer and animator. Because much of the animation matched earlier models too closely, his great knowledge of Disney’s past animators stopped him from working to his full capacity.

He voiced the Queen in the ‘Great Mouse Detective’ in 1986. While working with three-dimensional sketching in this film, he was able to further highlight his particular style.

He started work on ‘Oliver & Company’ in 1988, but turned it down to work on ‘Who Framed Roger Rabbit,’ animating the main character, Roger Rabbit, and practically every other character save Jessica. This film is where he really discovered his own animation style, while also successfully combining the styles of previous animators.

In 1989, his animation of King Triton in ‘The Little Mermaid’ was one of his most successful flicks. He achieved a successful combination of realism and comedy, paving the path for subsequent Disney animators.

In 1990, he was thrilled to be hired as a supervising animator for Mickey Mouse in the film “The Prince and the Pauper.”

During his ‘villain trio’ period, from 1991 to 1994, he worked on most of his career’s important films. He voiced Gaston in ‘Beauty and the Beast,’ Jafar in ‘Aladdin,’ and Scar in ‘The Lion King,’ among other characters. His exceptional ability to contrast evil with good people is demonstrated through opposing attire, design, and characterization.

For a change, he decided to turn to more heroic characters in 1997. He was hired to play Hades in the Disney hit “Hercules,” but he was instead asked to play the lead character himself.
In 2002, he worked on Lilo from ‘Lilo and Stitch,’ one of his most famous characters. One of Deja’s favorite characters and films to work on was the character’s subtle characterization.

He worked on films like ‘Mickey’s Twice Upon a Christmas,’Home on the Range,’The Princess and the Frog,’ and ‘Winnie the Pooh’ from 2004 to 2011. His distinct style distinguishes each of the characters he creates.
Deja is currently working on his own animated films, according to Deja’s own blog, ‘Deja View.’ He teases that his 30-year Disney career may not be done yet.

In 1988, Deja’s work on ‘Who Framed Roger Rabbit’ established his career by animating a toon universe that is linked with real-life events. The film rekindled interest in animation and helped to revitalize the industry. It is thought to have marked the start of the contemporary age of American animation.

At the 35th Annie Awards in 2006, he received the ‘Winsor McCay Award.’ The award was granted to him in recognition of his major contributions to the field of animation.

This inspirational man lives an openly gay life that is thought to have impacted the creation of some Disney characters.

Deja is widely regarded as one of Disney’s most important animators. His ability to create realistic movements and compelling characters have influenced artists and animators all across the world.

Andreas is one of the wealthiest cartoonists, as well as one of the most popular. Andreas Deja’s net worth is estimated to be $1.5 million, according to Wikipedia, Forbes, and Business Insider.

He shared a cubicle with future legendary filmmaker Tim Burton while working on his first film, ‘The Black Cauldron.’

During the animation process, this well-known animator frequently brought live animals into the studio. He studied and created his animated figures using these creatures. The dog in ‘Lady and the Tramp,’ deer in’Bambi,’ and lions in ‘The Lion King’ are just a few of his animal-inspired characters.