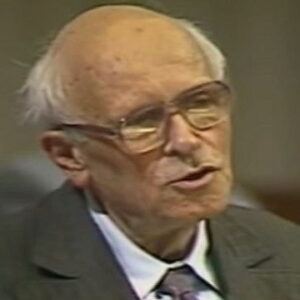 Andrei Sakharov, also known as “The Father of the Soviet Nuclear Bomb,” was a Russian physicist and Nobel Laureate. He was a superb nuclear scientist and a powerful political activist, one of the most fervent and uncompromising supporters of human rights and liberties in the twentieth century. He worked on controlled nuclear fusion research, which contributed to the development of the first Soviet hydrogen bomb. His work on the nuclear program, which he promoted as ‘The Third Idea,’ eventually led to him becoming a dissenter. He became increasingly concerned about the possible ramifications of his work after the first Soviet hydrogen bomb was tested. He returned to fundamental research and began working on cosmology after a period of time, but he continued to resist political discrimination. Later in life, he became a more outspoken supporter of human rights, and when he condemned the Soviet military action in Afghanistan, he was exiled from the Soviet Union. For the rest of his life, he was a passionate fighter for political reform and human rights. Despite being an agnostic, he believed that the universe and human life were guided by a non-scientific “guiding principle.” He was a brilliant theoretical physicist and a well-known dissident, but most importantly, he was a wonderful symbol of courage, intelligence, and humanity.

Dmitri Ivanovich Sakharov, a physics teacher and pianist, and his wife, Yekaterina Alekseyevna Sakharova, a homemaker, had him on May 21, 1921, in Moscow.

His beliefs and demeanor were significantly impacted by his parents and paternal grandmother, Maria Petrovna.
He studied at Moscow State University in 1938 but was relocated to Aşgabat, which is now part of Turkmenistan, during World War II, where he graduated in 1942. He then went to work at a munitions factory’s laboratory in Ulyanovsk.

In 1945, he returned to Moscow and enrolled in the Soviet Academy of Sciences’ P.N. Lebedev Physics Institute (FIAN). In 1947, he finished his doctorate.

After the war, he began research on cosmic rays and was instrumental in the construction of the first megaton-range Soviet hydrogen bomb, known in Russia as ‘Sakharov’s Third Idea’ and in the United States as the Teller-Ulam design.

He was involved in top-secret thermonuclear weapons research in a secret location during the 1950s and 1960s. In the early 1950s, he proposed the tokamak, a controlled nuclear fusion reactor, in collaboration with Igor Tamm.
He became concerned about the moral and political ramifications of his work in the late 1950s and fought nuclear proliferation.

In the late 1960s, he returned to fundamental science and began working on particle physics and cosmology. He also presented the concept of generated gravity as a quantum gravity alternative.
In 1968, he authored ‘Reflections on Progress, Peaceful Coexistence, and Intellectual Freedom,’ his most well-known political article.

He was hard-pressed by the authorities after becoming one of the founders of the Committee on Human Rights in the USSR in 1970.
Following his vocal protests against the Soviet incursion in Afghanistan in 1980, he was imprisoned and forced into internal exile in Gorky, where he remained until 1986.

The conceptual breakthrough in the construction of high-performance atomic weapons was one of his most important contributions. He was the brains behind the Soviet Union’s ‘Third Idea,’ a codename for the country’s thermonuclear weapons program.

The European Parliament’s highest honor, the ‘Sakharov Prize for Freedom of Thought,’ is named after him and given yearly to people and organizations dedicated to human rights and freedom.

In his honor, the American Physical Society awards the ‘Andrei Sakharov Award,’ which honors “exceptional leadership and/or achievements of scientists in preserving human rights.”

He met Klavdia Vikhireva, a laboratory assistant while working in Ulyanovsk, and they married in July 1943. Tanya, Lyuba, and Dmitry, their three children, were born to them. Klavdia, unfortunately, died in 1969.

In 1970, he met Yelena G. Bonner, a human rights activist, while maintaining vigil at a trial. In 1972, they married, and she became his staunchest supporter.

Andrei is one of the wealthiest physicists and one of the most well-known. Andrei Sakharov’s net worth is estimated to be $4 million, according to Wikipedia, Forbes, and Business Insider.