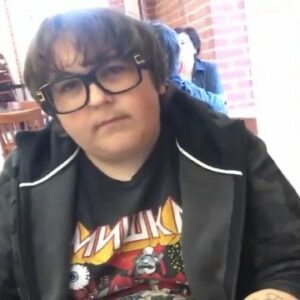 Andy Milonakis is a comedian, actor, and rapper from the United States who is best known for his MTV show “The Andy Milonakis Show.” In September 2007, he launched his own online show, MyDamnChannel.com, in order to perform more “strange stuff” than his MTV show permits. ‘Waiting…,’ ‘Who’s Your Caddy?,’ ‘Wieners,’ ‘Extreme Movie,’ ‘Private Valentine: Blonde & Dangerous,’ and ‘Still Waiting’ are among the comedies in which he has appeared. In the 2012 film ‘Mac & Devin Go to High School,’ he co-starred with rappers Snoop Dogg and Wiz Khalifa. He has most recently worked on the films ‘Dumbbells’ and ‘Halloweed.’ He has been a voice actor on the animated television show ‘Adventure Time’ since 2010. In 2011, he created the show ‘Snoop Dogg’s Double G News Network,’ which blended his love of humor and rap. In 2013, he participated in eight episodes of the sketch comedy series ‘The Kroll Show.’ During 2014, he launched his own cooking show on the YouTube channel ‘Munchies.’ He joined the ‘Baited!’ podcast with YouTubers Anything4views and Keemstar in December 2016. He’s also a Twitch livestream who was recently named one of the fastest-growing IRL streamers.

Andy Milonakis began his career as a computer support guy at a Manhattan accounting firm in the late 1990s. He loved comedy and would often make comedic movies and sketches in his leisure time, which he would then put on a friend’s website, ‘AngryNakedPat.com.’

During this period, he began taking comedy courses at the Upright Citizens Brigade Theater in New York City in order to pursue his dream of becoming a comic. He also posted handmade webcam recordings of freestyle rap and short films, in addition to funny videos. Within two weeks of its debut, one of these videos, titled ‘The Super Bowl Is Gay,’ became an internet hit.

Andy produced a video of himself rapping and released it online instead of attending a friend’s Super Bowl party on January 26, 2003. The six-minute movie became an instant smash, garnering 100,000 views in just 24 hours. Interestingly, one among the numerous people who watched the video was a writer for ABC’s late-night show ‘Jimmy Kimmel Live!’ Andy immediately received an email from the show’s producers.

He made a few of appearances on ‘Jimmy Kimmel Live!’ before being appointed as a part-time correspondent on the show. In 2005, he earned his own show, suitably titled ‘The Andy Milonakis Show,’ after a few pitches on MTV. He started his own YouTube account, ‘Andy Milonakis,’ in 2006, where he broadcasts strange films with his peculiar blend of humor.

Between June 2005 and May 2007, Andy Milonakis hosted his show for three seasons. The show’s initial season broadcast on MTV, and subsequently it was relocated to MTV2. While the first two seasons were shot in New York City, the last season was shot in Los Angeles. There were absurdist comedy, animated parts, and a man-on-the-street portion included in the presentation.

It also featured several of his real-life neighbors from Manhattan’s Lower East Side as extras. Celebrities such as Lil Jon, Snoop Dogg, and Akon, as well as pop diva Hilary Duff, stand-up comedian Sarah Silverman, and professional snowboarder and skateboarder Shaun White, were among the visitors. In the second season, Jimmy Kimmel himself appeared in one episode.

Andy Milonakis, a self-described rap fan, has been seen rapping in his videos and has been in a few music videos by musicians such as Lil B and Snoop Dogg. In 2008, he released ‘The Andy Milonakis Rap,’ a full-fledged rap song on YouTube. After his MTV show ended, he formed the comic hip hop group ‘Three Loco’ with two other MTV graduates, Dirty Nasty and Riff Raff.

On November 27, 2012, they released their debut album, “Three Loco.” Andy confirmed the group’s disbandment on Twitter in September 2014. He became acquainted with rapper Chief Keef after meeting him on Twitter in 2015. On the songs ‘Hot Shit,’ ‘G.L.O.G.A.N.G.,’ and ‘My House,’ he teamed with Keef.

Andrew Michael Milonakis was born in Katonah, New York, on January 30, 1976, and grew up in Westchester. Despite the fact that he is 41 years old, he was born with congenital growth hormone insufficiency, which causes him to look and sound like an adolescent male. In Cross River, New York, he attended John Jay High School. He began utilizing humor as a protection technique to avoid bullying during his high school years. “You’re not going to be the most popular man in high school if you’re a serious, chubby, young-looking kid,” he says.

Andy Milonakis has a net worth of $1 million dollars as an actor, writer, and rapper in the United States. Milonakis is most known for his appearances on “Jimmy Kimmel Live!” and “The Andy Milonakis Show,” which he co-created with Jimmy Kimmel and aired on MTV/MTV2 from 2005 to 2007. Andy has acted in a number of films and television shows, including “Waiting…” (2005), “Crank Yankers” (2007), and “The Kroll Show” (2009). (2013). Milonakis rose to prominence after releasing the film “The Super Bowl Is Gay” in 2003, and he later began uploading rap songs to YouTube. His YouTube channel has 539,000 subscribers and more than 100 million views, and he also has 550,000 followers and about 1,500 subscribers on Twitch.