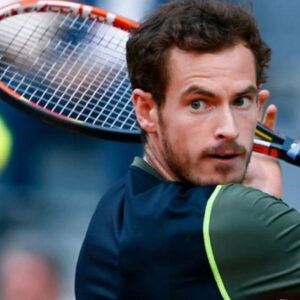 Sir Andrew Barron Murray (OBE) is a Scottish-born British professional tennis player. With three ‘Grand Slam’ championships, two ‘Men’s Singles Olympic Gold Medals,’ and a ‘ATP World Tour Finals’ victory, he is one of the best tennis players in the world. He is a gifted player with a skill set that includes speed, power, and dexterity. He was born and bred in Scotland, but spent his adolescence in Spain, where he studied clay-court tennis. He became the ‘World’s No. 1 Junior’ and the youngest player to represent Great Britain in the ‘Davis Cup’ at the age of 17. He was the first British man to win the ‘Grand Slam singles’ competition in over 35 years, and the first British man (since Fred Perry) to win several ‘Wimbledon Singles titles.’ He is the first male tennis player to win two ‘Olympic Singles Gold Medals,’ according to the record books. He is a co-founder of ‘Malaria No More UK’ and a global advocate for the World Wildlife Fund. He is married to Kim Sears, and they have a daughter together.

Murray was born in Glasgow, Scotland, on May 15, 1987, to Judy (née Erskine) and William Murray. He grew up in the central Scottish town of Dunblane. Murray and his older brother Jamie have been trained by their mother Judy, a former competitive tennis player and coach, since they were three years old. At the age of five, he competed in his first competitive tournament, and by the age of eight, he was competing against adults.

Murray was there at a tragedy in 1996 when Thomas Hamilton, an armed man, stormed the ‘Dunblane Primary School’ and shot 16 pupils and a teacher before shooting himself. Murray managed to get away by hiding in a classroom. He said in his memoirs that he had attended a youth group led by Hamilton.

When he was ten years old, his parents divorced. His mother trained him until he was 12 years old, after which he moved to Spain to practice on clay courts. He attended ‘Schiller International School’ in Barcelona, Spain, and trained at ‘Sanchez-Casal Academy’ under Coach Pato Alvarez. He had previously expressed an interest in football and was offered training with the ‘Ranger Football Club’ when he was 15, but he chose to focus on tennis instead.
At the age of 12, he won the ‘Florida Orange Bowl,’ a significant juvenile tournament. In 2004, he became the ‘World’s No. 1 Junior’ after winning the ‘US Open Junior Title.’ He was the only non-English individual to win the BBC’s Young Sports Personality of the Year award in 2004. He was the youngest player to represent Great Britain in the Davis Cup at the age of 17.

Murray made his professional debut in April 2005, at number 407, and rose to number 64 by the end of the year. He defeated top-ranked Roger Federer to win the ‘Cincinnati Master’s Tournament’ in 2006. In the same year, he won the ‘SAP Open,’ defeating Andy Roddick for his first ATP title.

In 2007, he won the ‘SAP Open’ for the second time, as well as the ‘St. Petersburg Open,’ and finished in the ‘Top 10.’ In the semifinals of the 2008 ‘US Open,’ he upset Spanish champion Rafael Nadal, but lost in the finals against Federer.

His ascension to the top was not easy or seamless. He entered the ‘Top 10’ in April 2007, and then the ‘Top 4’ in 2009. However, he struggled against the top three players at the time, Roger Federer, Rafael Nadal, and Novak Djokovic. He lost four Grand Slam finals between 2008 and 2012. He advanced to the 2012 ‘Wimbledon’ finals but was defeated by Federer, who won his 7th ‘Wimbledon’ title.

Murray hired Ivan Lendl, an eight-time ‘Grand Slam’ champion, as his coach in 2012, and their collaboration produced some promising results. Murray lost to Roger Federer in the 2012 ‘Wimbledon’ finals, but he beat Federer at the ‘London Olympic Games’ in August 2012 to win the ‘Men’s Singles Gold Medal.’ Later that year, he won his first ‘Grand Slam’ championship at the ‘US Open,’ defeating Serbian player Novak Djokovic in a tight match.
He was defeated by Djokovic at the ‘Australian Open’ in 2013. Murray defeated Novak Djokovic won the ‘Men’s Singles Title’ at ‘Wimbledon’ in July 2013, becoming the first British man to achieve it in 77 years (since Fred Perry in 1936). Since Harold Mahony in 1896, Murray is the second Scottish-born winner of ‘Wimbledon.’

Murray lost in the quarterfinals of the 2013 US Open, and after the Davis Cup in September, he opted to get surgery for his recurring back ailment. It was a reflection of his inconsistent tennis performance in 2014.
In March 2015, he won his 500th career tournament, the ‘Miami Open.’ He reached the finals of the ‘Australian Open’ for the fourth time, but was unable to win the title. He lost to Djokovic at the 2015 ‘French Open,’ then advanced to the quarterfinals of the ‘Wimbledon,’ but was defeated by Federer. He failed to reach the finals of the ‘US Open,’ and hence did not win any major titles in 2015.

In June 2014, he replaced Ivan Lendl as his coach with Amélie Mauresmo, a two-time ‘Grand Slam Tournament’ winner. He’s one of the few top male athletes who has enlisted the help of a female coach. He hired Jamie Delgado as his assistant coach in February 2016. Murray lost to Djokovic in the 2016 ‘Australian Open,’ but beat him in the ‘Italian Open’ in May. He reached the semifinals of the ‘French Open’ the same year (the first British player to do so since 1937), but lost to Djokovic.

Ivan Lendl agreed to return as his coach in June 2016. Murray won his second Wimbledon Men’s Singles title in July 2016 when he defeated Milos Raonic in straight sets. He won his second ‘Olympic Gold Medal’ in August 2016 when he defeated Juan Martin del Potro in the men’s singles tournament at the ‘Rio de Janeiro Olympic Games.’ He is the first male player to successfully defend his title in the ‘Olympic Tennis Singles.’

During 2017, he had to deal with an elbow injury and subsequently a hip issue. He had to withdraw from big competitions including as the 2017 ‘US Open,’ and the ‘Brisbane International,’ and the ‘Australian Open,’ in 2018. He had hip surgery in Melbourne, Australia, in early January 2018. He wanted to return to the game by March, but in an April 2018 interview (with the ‘Washington Post,’ he intimated that he was having trouble resuming his career. As a result, he appears to be out of the 2018 ‘Wimbledon.’

Murray was named a “Knight Bachelor” on the New Year Honors list for 2017. He won the ‘BBC Sports Personality of the Year Award’ three times in a row.

Murray received the ‘Freedom of Stirling,’ as well as a ‘Honorary Doctorate,’ from the ‘University of Stirling,’ in 2014.
Murray has two books: ‘Seventy Seven: My Path to Wimbledon Glory,’ which was released in November 2013, and ‘Hitting Back,’ which is his autobiography.

During the 2005 ‘US Open,’ Murray met Kim Sears, the daughter of player and coach Nigel Sears. On April 11, 2015, he married her at ‘Dunblane Cathedral.’ They live in Oxshott, Surrey, with their daughter Sophia.
He is the ‘World Wildlife Fund’s’ global ambassador. He is a founder member of ‘Malaria No More UK’ and participates in charity tournaments to raise money for the organization.

He was born with a bipartite patella, which implies that his kneecap bones are two separate bones rather than one. He was diagnosed with this ailment when he was 16 years old, and he has had to withdraw from matches because of it.

Andy Murray’s net worth is about $165 million.